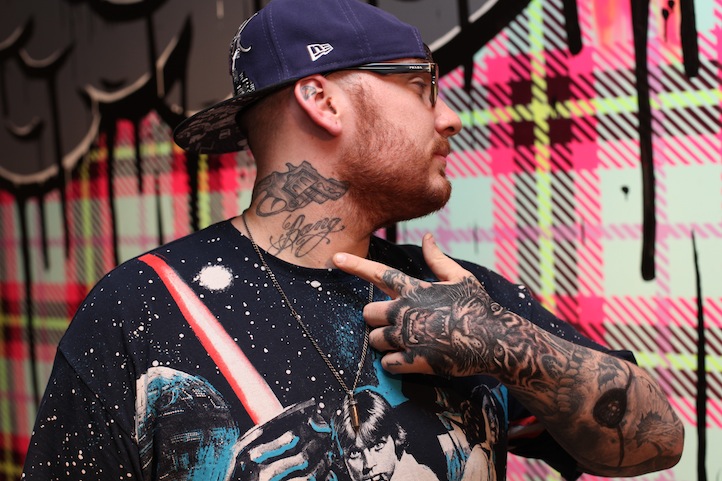 Tattoo artist Keith McCurdy goes by the name Bang Bang, a stage name of sorts that he’s established over the years by inking tattoos on some of the most recognized faces in entertainment. He counts clients like Justin Bieber and Katy Perry on his roster, but most notably it’s Cara Delevingne and Rihanna that he’s situated himself as the go to source for on-skin artistry. Here, showing exclusive imagery of the famous beauties in action, Bang Bang tell us about what it’s like working with today’s tastemakers on his permanent art.

Life+Times: What happens when someone gives you a really vague idea for a tattoo? Do you have to go through multiple rounds of concept sketches?
Bang Bang: If I get something really vague I try to refine it during the consultation while we’re talking about it. I generally won’t make an appointment to start working on something until I’ve nailed down a really cool idea in my head. So if somebody’s like “Oh, you know, I just want something…uhhh…on the top of my arm,” I’ll refer to my work. I’ll ask them to go through it and show me what their favorite styles are that I’ve done, and it helps. And then we kind of work through it together, just the very basic idea format, and then I start scribbling on paper and we find a cool shape, and then once I get it I start booking it and we’re ready to go.

L+T: What if I came in with an idea you thought was totally ugly, totally terrible? Would you go ahead with it? Warn me? Refuse?
BB: If I thought it the visuals weren’t great, or it didn’t work well for a tattoo, yes, I would absolutely tell you [no]. But sometimes there’s the taste thing, like some things that people want tattooed on them are super meaningful or, like, geometric shapes—I don’t trend that way, towards those things, but maybe they do, so as long as it’ll make a good tattoo – then I’ll do it. But if I don’t think it’ll make a good tattoo then I’ll tell you. 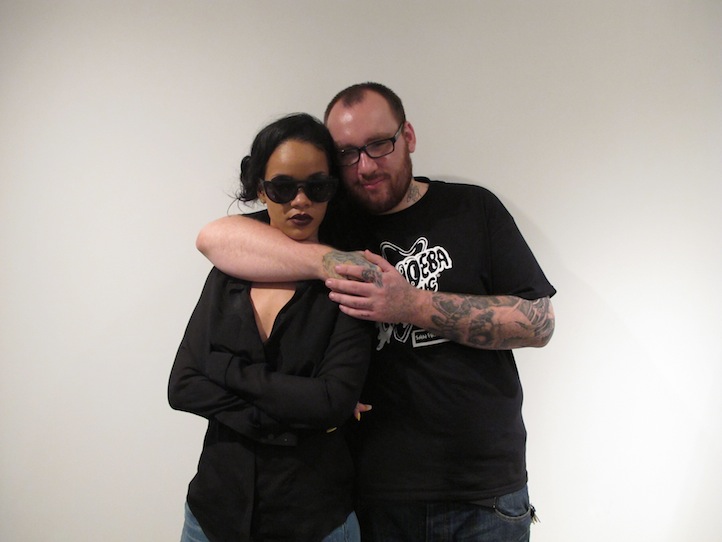 L+T: You’ve done 10 or 12 tattoos for Rihanna. What’s her style? What does she want out of a tattoo?
BB: She really wants something unique. Her ideas are unique and her body placement is unique. We spend a lot of time talking about the shapes of her body and what fits well in that spot. For example, her collarbone tattoo, she wanted something really personal for her. It was like her life motto: “Never a failure, always a lesson.” So we were like, “Ok, how are we going to put that on the front of your body? We don’t want it to take away from it. OK, we got to do it small, we got to do it linear, we got to change the tonality of the ink a little bit and make it a little lighter so it’s a little more subtle. And then also it’s just got to line up perfectly with your shape.” We spend a ton of time thinking about those things when we’re designing together. 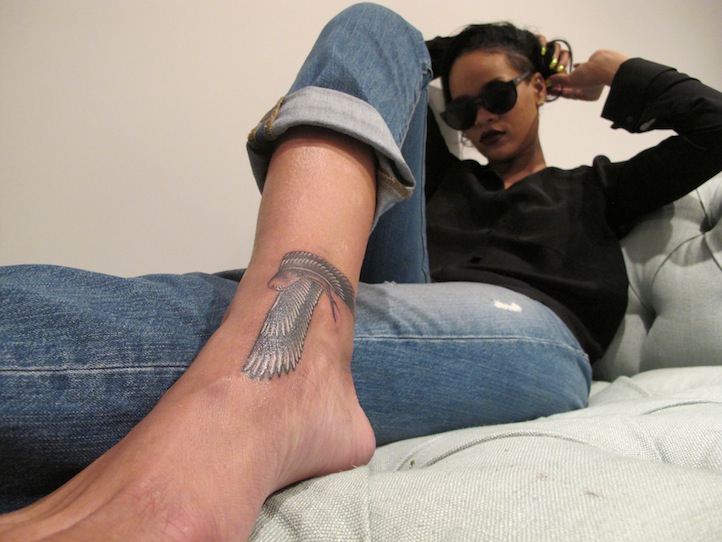 L+T: Talk to me about tattooing yourself. How is it different from giving a tattoo to someone else? Are there certain pieces you want where you’d only trust yourself to do them?
BB: No, not really, I prefer to have my friends tattoo me. Tattooing yourself is a cool experience—every tattoo artist needs to tattoo themselves at some point—but I don’t do the most detailed things on myself. When you tattoo yourself you can feel it, plus the application, so you kind of want to get through it as quickly as possible. So I try not to tattoo myself too often. 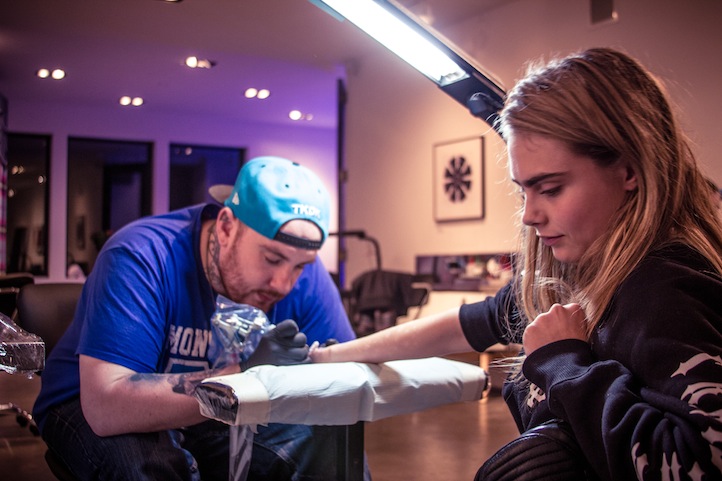 L+T: What was your experience like working with Paul Booth. What did you learn from him, and how do you two differ – your workflows, your processes?
BB: Working with him was really cool, mainly for my confidence. When I worked there I didn’t quite feel like I was ready to be there, but when I left I felt like I had accomplished something really big. Left on a really positive note and I was super confident and ready to take my work to the next level. The differences in our styles are really that Paul tends to go towards evil, scarier tattoos. That’s all he does. That’s all his studio does. They’re the best at that. My stuff is a huge range, so I’m more than happy to do the simplest little lettering as perfect as I can and I’m perfectly happy to do a giant religious tattoo, which is something Paul won’t do. So I just try to mix my styles up as much as possible, because I have fun with it. 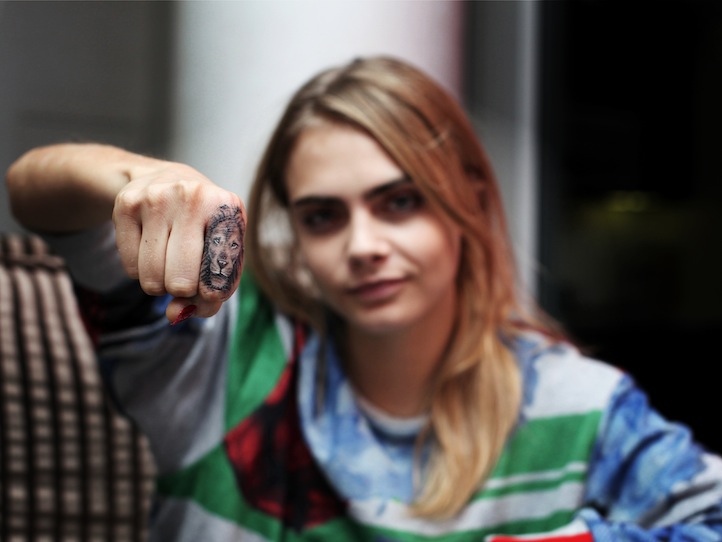 L+T: Speaking of your style, one of my favorites of yours I’ve seen is Cara Delevingne’s lion tattoo. Is there a story there?
BB: It’s a really cool story. Rihanna called me, she was in the Gansevoort Hotel, and she said she wanted a tattoo. I was like “Alright, I’ll be right there.” So I go to the Gansevoort and she’s like it’s not me, it’s my friend. So I met Cara, and Cara wanted to get her first tattoo, she wanted to write the word “Lion” down her finger. And I told her, I was like, “I don’t think that’s very sexy. Why don’t we do a picture of a lion like a piece of jewelry, like to decorate you?” Tattooing is so much of a fashion and people don’t really notice, but you got to do something timeless, because you don’t want to do something that’s a trend, like a lower back tribal tattoo that was cool in the ’90s and now people are covering them up all the time. So you really want to do something timeless and unique. Especially on somebody like Cara. So I gave her the idea, and she loved it, and we kicked that thing’s ass.

L+T: Why do you think you’re famous? What is it about your work that has made your work shine in the limelight?
BB: I don’t think I’m famous, although it’s strange to hear it. I just think I have a lot of support from a lot of really famous people. All my clients become like family, they stick around for years, so the word of mouth spreads, and I’m just so lucky to have so much support. People keep saying my name, so everybody keeps hearing it. It’s a really cool feeling.