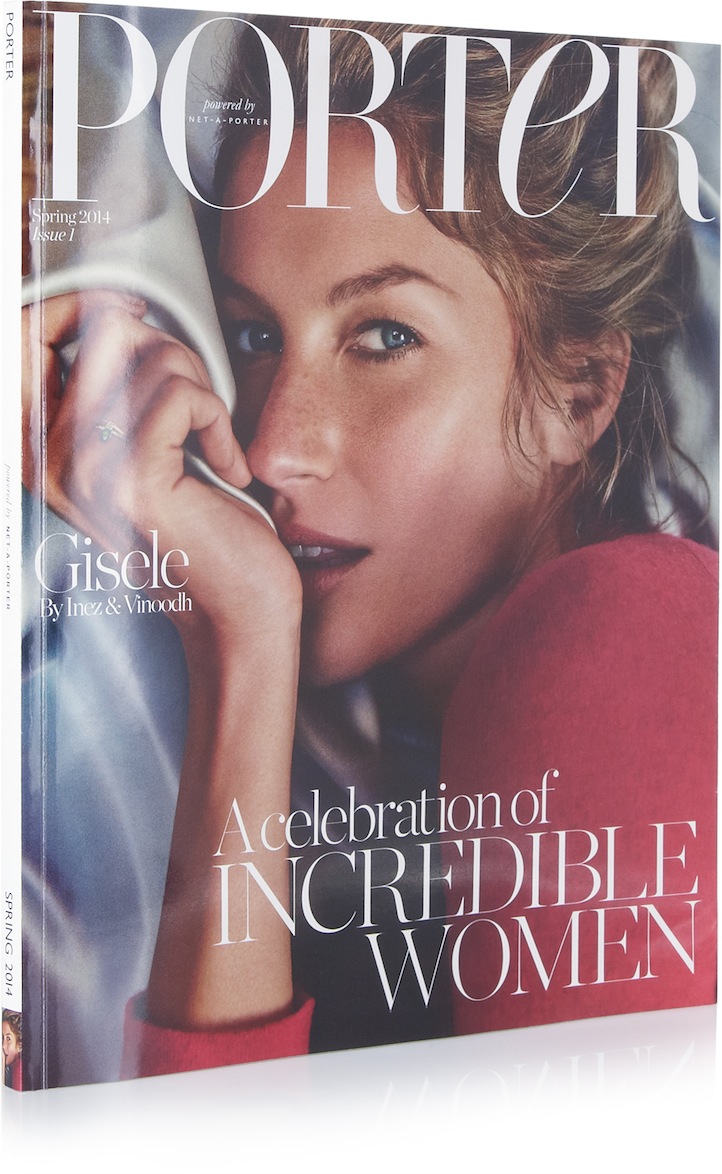 “I don’t throw any magazines out. I’m going to have to move out of my house, I refuse to throw any away,” says Natalie Massenet, founder of Net-a-Porter. “People have such an emotional relationship to magazines; you curl up with them and you take them to bed with you,” she says. Massenet, along with Lucy Yeomans, who helmed Harper’s Bazaar UK for twelve years, have launched PORTER, a print magazine that is nothing short of beautiful. While launching a print iteration in the midst of digital heights may seem backwards, for Massenet, it was always part of her plan. Together, PORTER’s debut issue is a stellar read, while at times feels more like a book than a fashion magazine. With six issues per year, here, Massenet and Yeomans speak to Life+Times about having 4,000 cover models before the issue was released, and more.

Life+Times: There was so much buzz the weeks leading up to the launch of PORTER – social media was going crazy…
Natalie Massenet: When we launched Mr. Porter a few years ago, we were able to create such a buzz before we even opened the door. We did this massive social campaign about being a founding member and that went viral incredibly fast. So by the time we turned on the website to the public, it was incredible to see the power of digital and the ways in which it can get your message across so quickly. That’s something you wouldn’t have been able to do ten years ago.

L+T: It’s all things digital, all the time. Nobody really sleeps…
NM: When Net-a-Porter launched in 2000, it was a combo of old world and new world; American Vogue wrote about us in their July issue and Daily Candy launched us too. Dani Levy of Daily Candy was the first and only person at the time that could speak about fashion in a digital way…and now look at the world.

L+T: Tell me a little bit about the app you launched to help get the word out there about the first cover for PORTER.
NM: We have this brilliant mobile team who has this dangerous ability to go from idea to execution quite quickly. When Lucy and I started talking about the name PORTER, we were at the shows and afterwards while we were re-capping we would say “that’s so Poerter” or “she’s so Porter” and what not. We started using the word to describe things and with our app, we wanted to tease the cover. So, we used this mentality. It just seemed like a natural thing to do.
Lucy Yeomans: What’s so interesting to me is that before we even released the cover, we already had 4,000 women (and men and dogs and cats) that had already been our “cover models.” It feels very democratic and very real… and very now. I was shocked by how global it went and how quickly… and it’s not stopping either. You cab be “Porter” anytime. This issue is all about “A Celebration of Incredible Women” and the app has worked to our advantage.

L+T: Before PORTER launched, you’ve been working on THE EDIT, a weekly online magazine under the Net-A-Porter umbrella that delivers beautiful and well-written original content on a weekly basis. Do you know how incredible it is?
NM: I don’t think Lucy does. I walk around the office all the time telling the team how incredible they are and what amazing work they’re doing.
LY: Thank you very much. It’s a little bit “hamster on the wheel” – we keep going and rarely stop. We have an amazing art director who pinned up this poster by my desk the other day of all 52 covers that we’ve worked on this year for THE EDIT. That really hit home. When I left Harper’s Bazaar, they made me a poster of all the covers I’d done over my twelve years there. Looking at the recent poster documenting one year of THE EDIT; it’s not much different.

L+T – The idea for launching PORTER came about over a “meeting of the minds.” Can you tell me a little bit about this conversation that the two of you had?
NM: The two of us had some conversations over the years about this. We would discuss how we wanted to create a dream magazine that was global and one in which we could talk about the vast cultures of women, not just American or British. At one point I looked at Lucy and said, “Would you ever consider doing something here?” She said “Yes.” Immediately I heard the trumpets in my head and we didn’t really speak about it for a while afterwards. I had to go to my board and speak to them about investing in print; many conversations needed to be had. But, a magazine was always a part of my plan.

L+T: You always had the idea to launch a magazine?
NM: If you ever come to London I’ll show you the original plan,  but yes, it was always in the cards. We are a media company and I always wanted a magazine. I also came at this from magazines as I wasn’t looking to create a new store.  I was looking to create a magazine that you could shop from.

L+T: Tell me a little bit about the operations behind PORTER as it seems very personalized.
LY: Things are bespoke here. The way we speak to the new agents is part of the process that I love the best as they can’t really believe the love and care we put into making sure they are happy. We take great care and attention to the details. We’ve approached this in a very approachable way. I think we are in 20,000 newsagents around the world. Its so much more than we ever imagined,  and I think they really love the energy of the collaborative nature. Luckily, we also came with an engaged audience. We wanted our newsagents to be involved in our social media campaign.

L+T: I’ve been flipping through the magazine and the way in which women are featured seems very “universal.”  It doesn’t feel at all pegged to one geographical location.
LY: I was really nervous if we were going to feel local or relevant enough. For instance the story on [photographer] Lynsey Addario is just an incredible story that all women can take something from.
NM: I think if you ask someone right now where this magazine is based, they might not be able to pin point exactly where it is. And that’s a good thing.

L+T: Gisele graces your beautiful cover and she’s shot by Inez and Vinoodh. Why did Gisele make sense?
LY: Inez and Vinoodh were there since the very beginning. Inez really wanted to challenge us and create a new language. That’s something I feel we’ve achieved  and something that’s only going to grow as we move forward.
NM: When Lucy and I started talking about cover options, we knew that there are two directions in which magazines can go; covers with either celebrities or supermodels. I think Gisele is this perfect hybrid of both and she adds the cherry on the cake in that she’s a social creature and a businesswoman. She’s a celebrity, a model; she represents the digital age and is immersed in philanthropy. She’s so incredibly “Porter.”