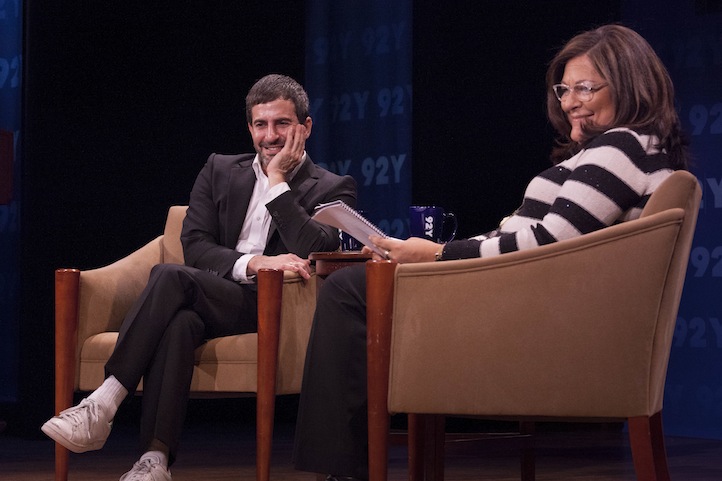 “Slightly bohemian, a little off-color”…that’s the bio attached to Marc Jacobs International’s Twitter account. It couldn’t be more apropos. Marc Jacobs himself has evolved way beyond a fashion designer into a straight-up cultural phenomenon. And with good reason. Jacobs entered into his position as Creative Director for Louis Vuitton in 1997, propelling the brand into a fashion iconoclast, maintaining the aspirational nature of the LV monogram, but with a modern spin. His own line has three collections: Marc Jacobs, along with the two diffusion lines Marc by Marc Jacobs and Jacobs by Marc Jacobs. Add to that a Little Marc Jacobs line and his own bookstore called Bookmarc, and the NYC native has officially crafted an empire that anyone and everyone can enter. That’s atypical for fashion, and last week when Jacobs sat before NY Fashion Week founder Fern Mallis at 92Y it was clear that her Coco Chanel inspired values were no match for Marc’s Studio 54 pizzazz.

The talk was initially slated for November 2012; however given the destruction of Hurricane Sandy, the discussion was respectfully postponed. Marc Jacobs lost his apartment to the wrath of Sandy. “I can’t think of a more exciting way to start my year than with Marc Jacobs,” Mallis expressed before introducing the fashion icon. It took Mallis a year and a half to lock down an interview with Jacobs, but here he was ready to answer anything. There were no holds barred. Marc was fresh off another speech as the keynote speaker for Women’s Wear Daily’s CEO Summit, but arrived at 92Y to elaborate on some key elements of his life and career – both the good and the bad. He entered the stage in a simple suit and white sneakers. Classy, yet hip – just like his multiple brands.

Marc Jacobs was born on April 9, 1963 in New York City, sharing a birthday with recent rap reference inductee Martin Margiela. Marc’s father, Steven Jacobs was a William Morris talent agent, Joan Rivers’ in fact. Years later Rivers would tell Marc, “If I knew that brat of Steven Jacobs was going to grow up to be Marc Jacobs, I would’ve been a lot nicer to you when you were a kid.” His mother was a receptionist at William Morris, and Marc entered the workforce in the famed WMA mailroom at 15. He hated it.

Jacobs attended the High School of Art and Design (followed by Parsons). He moved in with his grandmother, who taught him needlepoint, embroidery, and knitting. Jacobs also became a fixture in the NYC nightlife as a teen, entering the Studio 54 vortex, bringing his books to the club so he could leave and head right to class the next morning. Studio 54 gave him, “an unhealthy knowledge of substances and anonymous sex.” He enrolled in a History of Costume course in Paris, and he fell in love with the European city. Now he spends six months a year in Paris, with the other half of the year in New York City. His first fashion show included smileys on sweaters, which caught the attention of Robert Duffy, who has remained his co-pilot for close to three decades. Throughout his discussion with Fern, Marc would credit his longtime partner for everything, from handling the business affairs of Marc Jacobs International to helping him through a wicked drug addiction and several relapses. The first intervention was conducted in 1999 by Duffy, supermodel Naomi Campbell, and Vogue Editor-In-Chief Anna Wintour. “I wouldn’t say I’m 100% sober,” he says. “I’m not perfect,” though his only current vices are cigarettes and exercising at Chelsea’s Dave Barton Gym six days a week. There was a time in Jacobs’ life when he had 21% body fat, living on nothing but fast food. He would vomit at fashion shows due to a combination of stress and unhealthy eating. A diagnosis of ulcerative colitis led to the verdict that his colon had to be removed (Jacobs’ father died from the same ailment). However, his good friend Kim Gordon of Sonic Youth suggested he take a holistic approach. “That’s when I stopped believing in medicine and started believing in nutrition,” Jacobs says.

What followed was a painful yearlong regimen of intense juicing, consuming bland proteins, along with meditation, exercise, and laughing everyday. “It was worth it,” he says. “I have my colon.” These are the anecdotes that highlight Jacobs as a human above all. While other designers like Karl Lagerfeld say Adele is “a little too fat,” Jacobs remembers his journey and acknowledges his own imperfections. He even has “Perfect” tattooed on his right wrist to remind him that imperfect is perfect for him. Jacobs has 33 tattoos in total, including random cartoons and a couch near his hip. He’s a little wacky (he showed up as a camel toe for Duffy’s costume party), very comical, yet an obvious genius. He’s gone against the grain on a number of occasions. When Louis Vuitton told him he could do anything but mess with their monogram, he hired artist Stephen Sprouse to release a line where Sprouse tagged over the monogram on a collection of purses. Just this year, when graffiti writer Kidult vandalized one of the many Marc Jacobs stores lining NYC’s Bleecker St., Marc took a picture of the vandalism, put it on a t-shirt, and sold the shirts for several hundred dollars a piece. How’s that for revenge? It’s obvious that Marc Jacobs has risen to royalty simply through playing by his own rules. His new projects in the works include a Sephora cosmetics line and a possible Louis Vuitton fragrance (though LV doesn’t sell duty free, a major pitfall in the fragrance industry).

By the end of this week, we will more than likely know if Marc Jacobs and Robert Duffy have renewed their contracts with Louis Vuitton. After 15 years, the pendulum could sway in either direction. Only time will tell. However, after an evening at 92Y with Marc Jacobs, it became even more evident that if he moves on from LV, it will be a dramatic loss for the brand. Turning 50 in just a few months, Marc Jacobs is still youthful and full of life, adding a dimension to fashion rarely frequented.

“I didn’t have the most delightful childhood,” he recalled to Fern Mallis that night. She appropriately replied, “Well you’re having one now.”