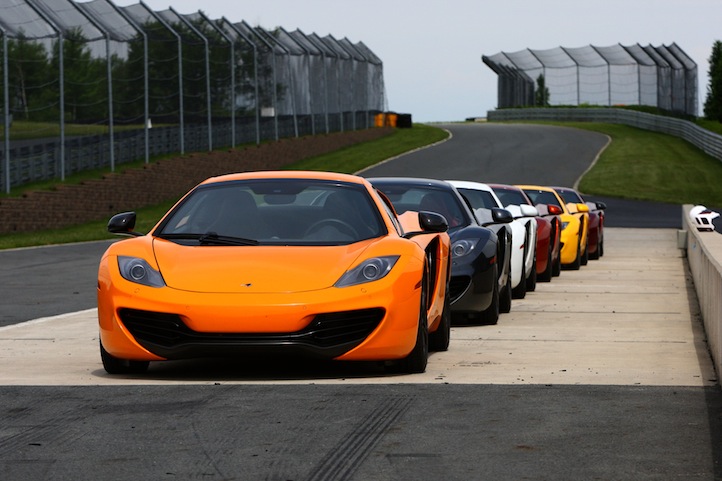 The eloquent act of driving the 2013 McLaren 12 C Spider in its ideal setting requires a racetrack, a certain nerve, and a set of Pirelli Z Corsa tires. Life+Times took the wheel of the British born 12C Spider at the Monticello Motor Club on a perfect summer day. The sunshine was high in upstate New York, but the humidity was low providing prime conditions to venture out in this mid-engine dream of a sports car and feel what 0 to 60 mph in 3.1 seconds does to the human body.

McLaren inherently grasps the nuance of performance at triple digit speeds — the McLaren Group has its roots in motorsports dating back to Bruce McLaren, who founded the racing company in 1965. Mr. McLaren was a champion race car driver from New Zealand. He was tragically killed in an accident on the track at age 32 in 1970. His team and his company carried on his name. The results were stellar. Think Emerson Fittapaldi, Ayrton Senna and more recently Lewis Hamilton, who were all famous Formula 1 drivers for Mclaren Racing. A McLaren engineer told me that the steering wheel for the 12 C had been modeled after Mr. Hamilton’s handgrip. 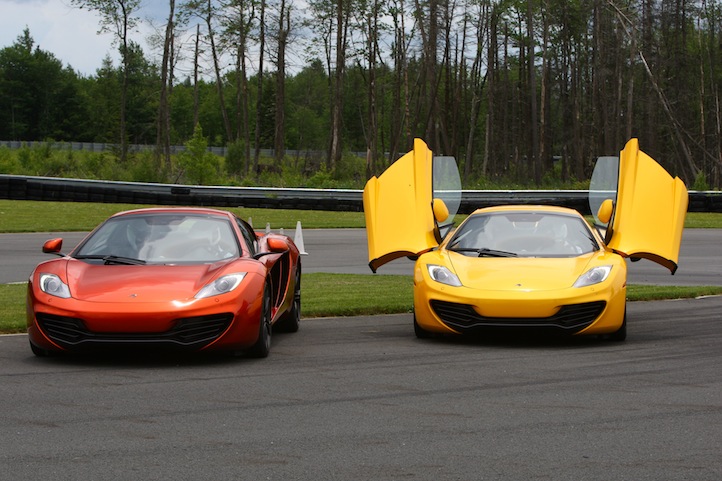 McLaren introduced its first road car, the McLaren F1, in 1992 causing fervor among motorsport enthusiasts who dreamed of owning that car. The company has continued to grow its road car division under the McLaren Automotive name. More recently, the McLaren 12 C coupe launched in 2011. The Mclaren 12C Spider is the brand’s newest sensation, a drop-top super star sports car, which causes tingles, particularly at the challenges provided by the corners at Monticello. It’s built at the McLaren Production Center in Woking, Surrey England, across the road from the technology center where it was developed.

McLaren’s elite track instructors boasted over 100 years of experience collectively, and so with their encouragement it didn’t take long before I was sailing in and out of corners at furious speeds, and gunning the engine full throttle on the straightaways. The McLaren 12 C Spider has a maximum speed 204 mph; I didn’t pause to glance at the speedometer. As it works, the engine spits out a deep bass growl that is both thrilling and frightening. 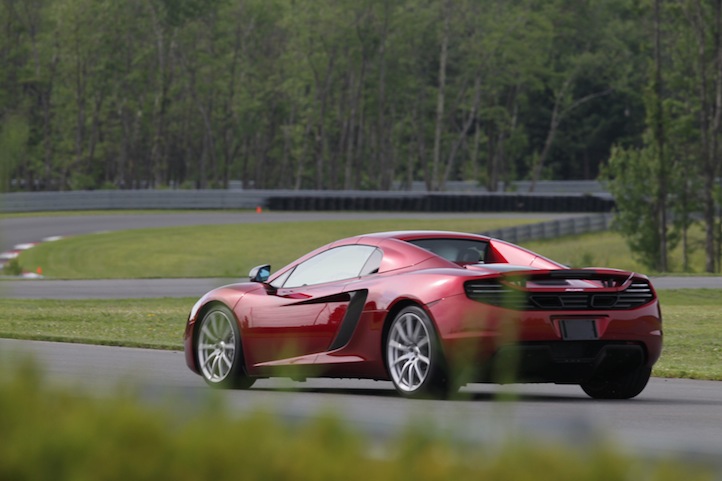 The mechanics of the McLaren are a work of lightweight innovation extracted from the Formula 1 program. Like the 12 C, its form is culled from a carbon fiber monocell. I saw the car in its skeleton version, a sculptural work that is priced at $90,000 alone. (Some owners like to buy these rare pieces for show.) The panels on the chassis appeared to be so light that I could lift them with one hand, but carbon fiber as a material is also incredibly durable. I could see the inner workings of the V8 twin turbo engine that powers out 616 horsepower.

Back on the track, we cycled through a series of exercises to highlight the 12 C Spider’s finer attributes including a stint practicing its steering precision, paddle shifting in sport mode and engaging launch control. The launch control function in the McLaren is like no other I’ve experienced in its class, involving a throttle and braking two-step dance before emission. “Starship Enterprise” are the words that come to mind. 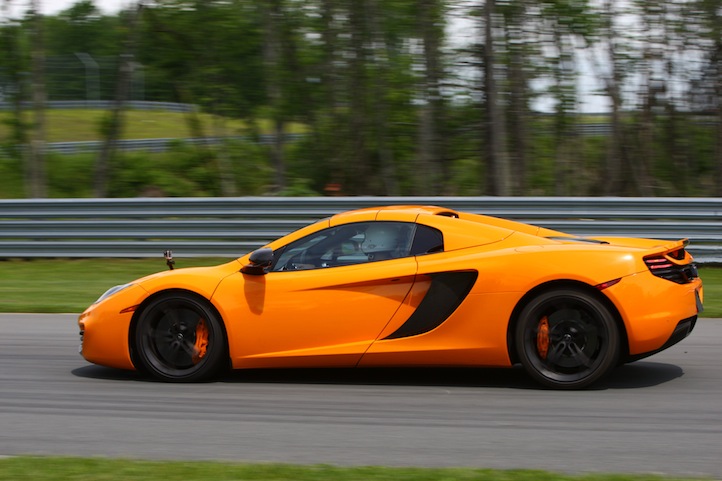 It takes a little practice to maneuver the dihedral doors and buttons to climb into the seats, but once you adapt it takes definitive swagger to pop in and out of the 12C. The interior is delectable and snug – all leather and sophisticated sportiness. When the retractable hardtop is up, it was easy to forget that I was inside of a convertible — every edge was streamlined. McLaren has achieved a best of both worlds scenario with the Spider.

What makes the Spider most fun on regular roads is its open air abilities. The hardtop drops in 17 seconds. It also features a heated glass rear window that operates independently of the roof for chillier jaunts. I never tired of the purity of its engine note, but if you did the car is equipped with a tony Meridian audio system. If you prefer another more extreme auditory option: Lower the window with the roof up to listen to the engine purr and snarl to your satisfaction, a guaranteed stress reliever. 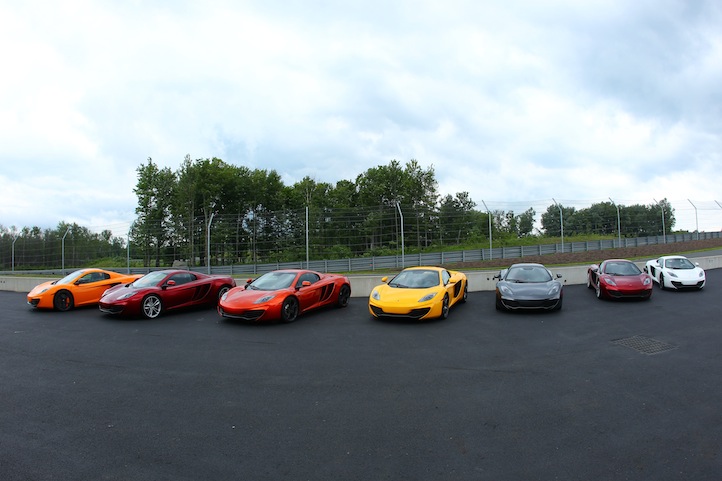 McLaren 12 C Spider competes with everyone’s favorite, the Ferrari 458 Spider, a work of automotive art in its own right. But the 12 C Spider maintains a clean, crisp remarkable flavor worth savoring on its own merit. It’s not for the casual enthusiast in handling or affordability; its base price is $268,250.

I ended my day in the McLaren 12 C Spider, ironically, in the passenger seat, making way for a young professional race car driver to show off his superior skills. He took the car to the limit over the 3.6 mile track and its 18 testy turns. Someone recently told me what makes a great stunt driver is a healthy sense of fear, which I was reminded of as he took off in a frenzy to show off his dazzling maneuvers. As the 12 C Spider and the driver showed off, my heart kept up with a healthy beat. The 12C Spider left me with the sense that the sky is the limit — and that this is the car that will take you there, if you’re willing to take charge of the ride. 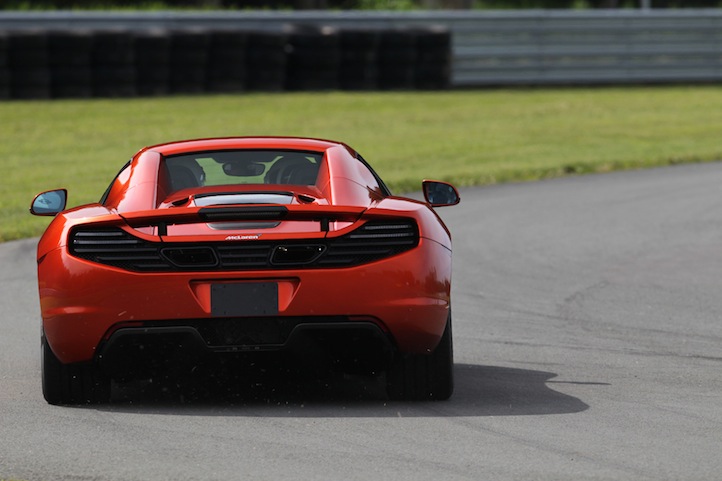