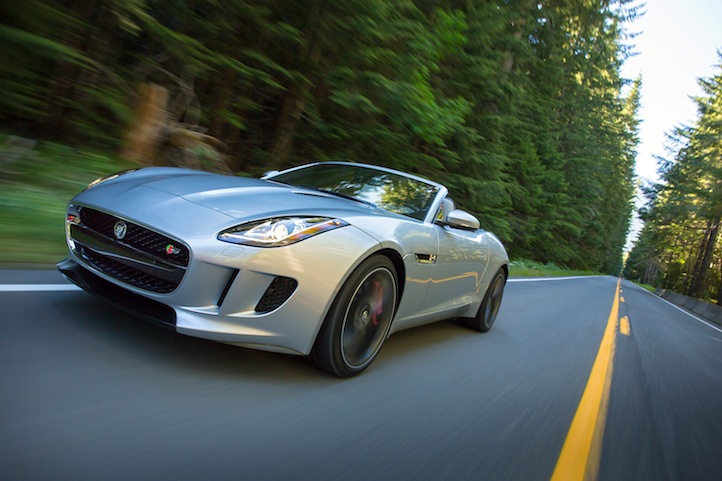 The Jaguar F-Type was made for roads like the Pacific Coast Highway. The F-Type is at home on the California 101, which offers a profound element of natural razzle-dazzle that suits the personality of this new two-seater soft-top convertible. The road slopes along the edge of the jagged coastline as pale sun reflects off lolling deep-blue waves in the distance. In the waning days of summer, the sky alternates from misty to a crisp blue. It’s the perfect backdrop for a Polaris white convertible F-Type cast lined in a stoplight redzone interior.

The 2014 Jaguar F-Type might be the most beautiful car to make its debut this year. Jaguar has redefined the essence of its brand from stodgy grandfather to a more stunning physique that’s both becoming and seductive. The F-Type is the most perfect example of Jaguar’s full-body makeover— it’s got curves in all the right places. The door handles only emerge when the car is unlocked. When the car is in motion, the handles retract and the exterior form becomes smooth and sculpted.

Life+Times drove the F-Type-S to the Pebble Beach Concours d’Elegance, the finest car show in North America held annually in August on the peninsula. The F-Type was in its prime on the crowded streets of Monterey, California, which becomes the luxury car capital of the world in late summer as car collectors gather to show off their six-figure and seven-figure rides. Drivers in vintage Bentleys craned their necks to get a closer look at the F-Type, though the F-Type is less than half the price of a new Bentley. Wherever it was parked, a cluster of gawkers gathered to admire the F-Type. It was used to enhance the entrance to the Intercontinental Hotel.

Our test car was the Type-S, which has a 3.0 supercharged V6 engine version equipped with a performance pack that adds in brakes with tasteful red calibers, flat-bottomed steering and performance seats to the list of amenities. The dynamic mode gives the Type-S that extra bite in sport mode. The Type-S offers plenty of zing producing 380 horsepower. It speeds from 0 to 60 miles per hour in 4.8 seconds. The top-of-the-line V8 version is recommended for only the extreme wildcats. It makes a whopping 495 horsepower. There’s also the base V6, which still cranks out a respectable 340 horsepower. The difference is evident from the outside in contrasting tailpipe designs. 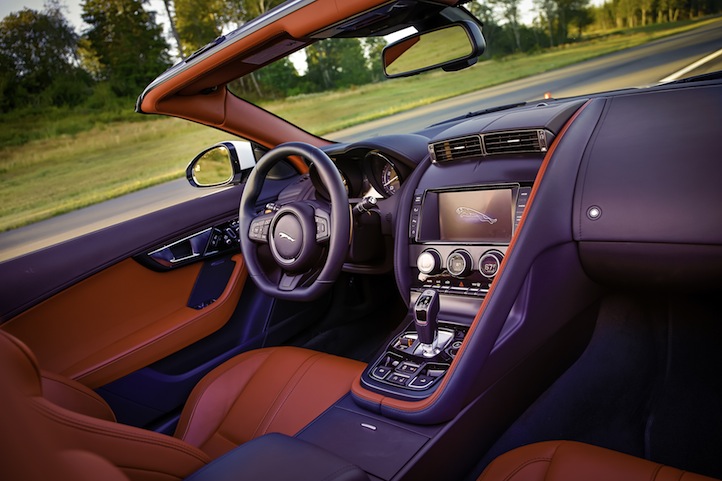 Yet, the F-Type makes for a reasonably efficient traveler, earning 27 miles per gallon on the highway, keeping up with a new trend we’re seeing in sophisticated fuel-conscious engineering combined with a lightweight aluminum frame. The rear-wheel drive front engine car was at its best on windy turns, where power and finesse worked in tandem.

The interior of our test car featured a clean yet attractive design in rich red leather. We noticed particular attention to surfacing and detail in the design, down to the red seat belts. The only compromise made in the F-Type is the minimal trunk space. We recommend duffel bags for weekend getaways. Yet, it’s hard to resist the F-Type as the beats thump clear and vibrant from the Meridian Sound System as we zip along the road to San Francisco, in a drive that was a California dream. 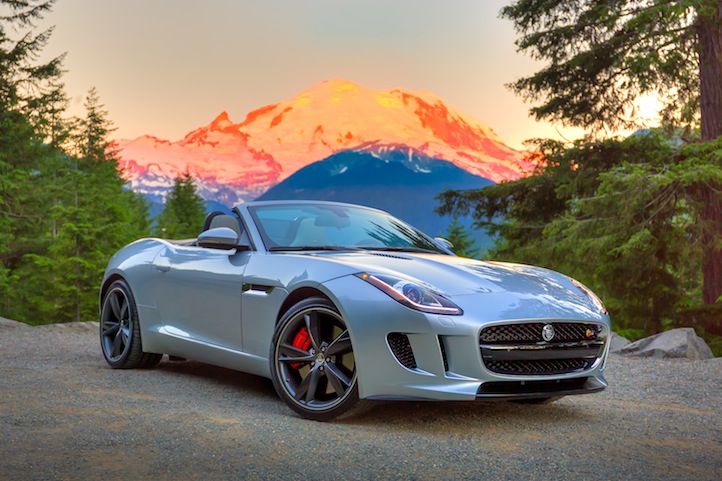