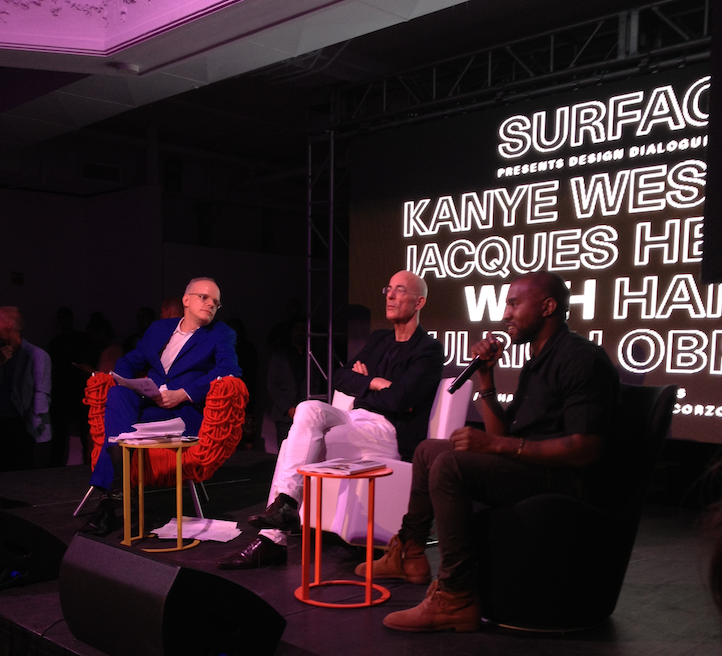 Kanye West and Swiss-born architect Jacques Herzog had much to say about design over the course of an hour-long panel discussion during Art Basel Miami. Prominent names and iconic design objects were rattled off in reference— from Corbusier lamps to the French architect Joseph Dirand, followed by references to The RZA, Tyler, the Creator, and Tesla founder Elon Musk. Serpentine Co-Director of Exhibitions and Programs Hans Ulrich Obrist moderated the conversation, which was organized by Surface Magazine. Less than 100 people attended the invite-only event.

Herzog is one-half of Herzog & De Meuron, a prominent architecture firm that recently completed development of the Perez Art Museum in Miami, which had its official opening across town earlier in the evening. The firm also built the Tate Modern in London, among dozens of other buildings.

The conversation later veered from design to West’s approach to recording in the studio. Herzog proclaimed his admiration for West’s music and desire to collaborate. He encouraged him to consider teaching school, like he chooses to do.

West discussed the way he learned to paint as a student, picturing images of music, much like a person who has synesthesia. He also offered a new public observation for his views on product design. “Luxury is time,” he said, followed by another prediction predicated by an apology; “Watches are dated.”

Overall, the two panelists seemed to be in concert. West received accolades from attendees after several responses including his reasoning for taking risks. He said, wearing a sly smile, “To do something wrong is more of a brave statement.”