On January 13 at 9PM EST, HBO will be debuting season two of GIRLS, the fanatically cult-loved show conceived, written, directed by and starring Lena Dunham. The show centers on the coming-of-age telling of a group of New York girls, and while their respective stories are the protagonists, Manhattan (and Brooklyn) help to set the sartorial stage – thanks to the talented on-set costume designer Jenn Rogien. As season two is about to take center stage, we chatted with Rogien about the outfits that help bring these GIRLS to life.

Life+Times: How would you say the sartorial aesthetic (as a whole) is different from that of season one?
Jenn Rogien: There are some subtle differences but as usual, the clothes keep up with the girls and help tell their stories. Since New York is such an integral part of the show’s dynamic; how do you infuse the city (and Brooklyn) into the wardrobe choices? I’ve lived in Brooklyn for the past few years and we shoot on location in Brooklyn frequently so I’m always people watching and soaking up inspiration. One of my favorite moments to observe is the morning commute – we’ve often been shooting for hours when the city wakes up and goes to work. It’s really inspiring to watch the city take on the day. I translate that wherever I can when making wardobe choices for the show.

L+T: How did you get into this industry? I know you’ve worked a lot with off-off Broadway productions? Was this something you’ve always wanted to do?
JR: I’ve always been interested in telling stories through clothing, starting with playing dress up in my mom’s closet when I was little. She sewed some of her own clothing and some of my clothing and always had a unique take on clothes. I spent loads of time in the theater in grade school and high school, helping put up shows and run rehearsals. I put together costumes on my own time because I loved the way the clothes helped tell the story of the characters. It wasn’t until I worked in my college’s undergraduate costume shop that I understood that costume design could be a career. I finally made the leap into costume design after helping a fellow designer sew for an Off-Off Broadway play. I didn’t always know I wanted to be a costume designer, but looking back now it’s the obvious choice! 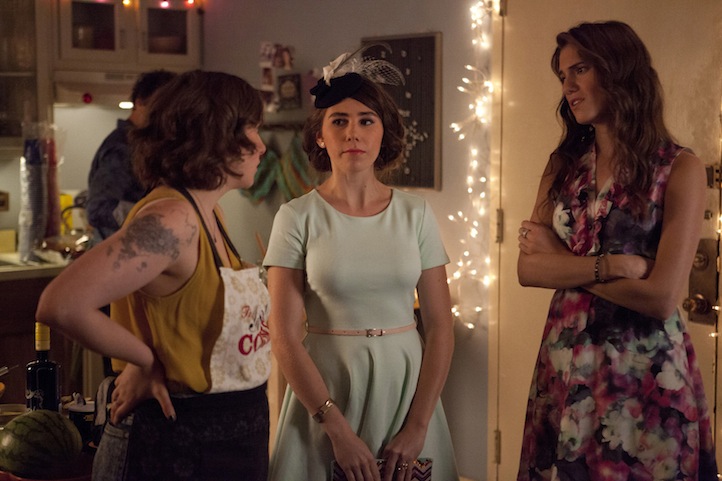 L+T: How did the gig with GIRLS come about?
JS: A producer and mentor on another show I was working on recommended me to the producers of GIRLS when she heard that they were looking for a costume designer.

L+T: You were listening to NPR one day and heard Lena on air. What was it about her that captured you then? What is it about her to this day that still captivates you?
JR: What caught me then and what still inspires me is how savvy and imaginative and well-spoken Lena is. She can capture things that I feel and put them into words and on the screen. She has incredible insight.

L+T: What type of research went into the culmination of the outfits that we’re about to see in season two?
JR: The research for season two was much more targeted. We had established looks for the characters everyday wardrobe so the research revolved around things that were specific for an episode or for a moment. We also had some new characters and settings to research.

L+T: “Realism” is a key word when describing the outfit choices of the characters. How did you achieve this?
JR: The girls of GIRLS are at a transitional point in their lives and I wanted to reflect that in their wardrobe. I wanted their looks to be realistic but elevated just a tiny bit to sit in the world of a TV show. The wardrobe had to help tell the story of these quirky, gritty, mostly broke, somewhat lost, funny girls, but not be goofy or distracting. Really getting all of those characters right is a constant editing process – doing tons of research, shopping/finding/making just the right pieces, pulling all the looks together for the fittings and then collaborating with the actors in the fitting room to create a character. It’s both challenging and exhilarating.

L+T: Who do you consider your mentors?
JR: Daniel Lawson the costume designer of The Good Wife, Bored To Death, and Lipstick Jungle, with whom I was blessed to work with for five years and who taught me most everything I know. Brooke Kennedy and Kristen Bernstein – the producers of The Good Wife whose insight, advice, and respect are precious. Gail Fitzgibbons – the wardrobe supervisor of Across the Universe and Enchanted among many many others who gave me my first jobs and helped me get my start in this business. She taught me the rest of what I know. Barbara Hause – the wardrobe supervisor on my first movie Fur as well as Baby Mama and now GIRLS and Orange is the New Black who has given me some of the best advice of my career and held my hand through countless challenges. She was the first wardrobe supervisor for whom I ever worked and now she is a treasured colleague and collaborator.