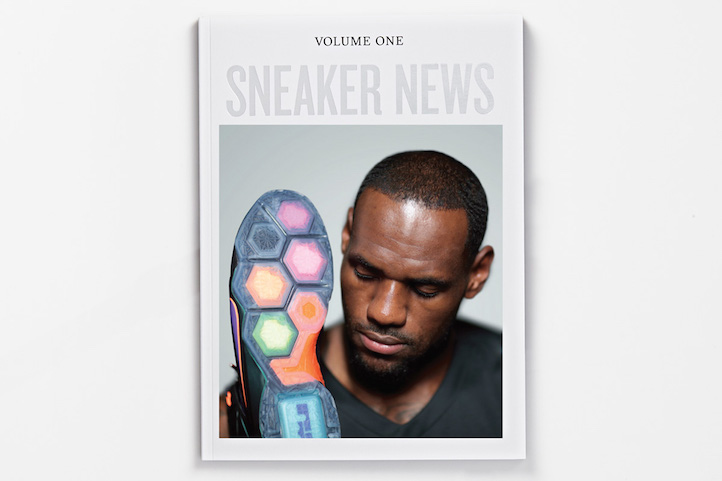 As the holiday season approaches, Sneaker News presents a perfect stocking stuffer for the sneaker connoisseur on your Christmas shopping list. Already dominant in the digital arena, SneakerNews.com – which has been the premier online destination for all sneaker culture related updates for almost a decade now – is publishing its first print magazine. It’s titled SNEAKER NEWS Volume One and according to Sneaker News’ publisher, Yu-Ming Wu, it isn’t your ordinary sneaker magazine. “This is more of a book than it is a magazine,” he goes on to explain. “That is why we’re calling it a ‘volume’ instead of an ‘issue.'” The inaugural volume, which features an exclusive interview with NBA superstar Lebron James, will be available for purchase starting Friday, November 28th.

In a conversation with Life + Times about SNEAKER NEWS Volume One, Yu-Ming Wu spoke on what it was like getting Lebron James on the inaugural issue’s cover, some of the challenges putting the magazine together and funding the project through Kickstarter.

L+T: What are some of the things featured in SNEAKER NEWS Volume One?
YW: When we started thinking about the magazine one of the biggest stories obviously was Lebron James and his presence in the sneaker world. Second to Michael Jordan, I think Lebron is the biggest athlete in the sneaker market, so we really wanted to go after him and really try to get something cool with him. We ended up getting him on the cover and were able to do a cover story on him. I believe it is his first ever sneaker based interview where he just goes in depth about his sneaker line with Nike and some of his likes and dislikes.

L+T: It must have been exciting knowing that one of the world’s biggest athletes wanted to be a part of this inaugural issue.
YW: I mean, we basically fell out of our seats as soon as we got approved and confirmed to be able to do it. After that, it became kind of a struggle to figure out all of the logistics like photographing him, having access to him and getting him to talk to us, being that he’s one of the most famous people on the planet, but it was all well worth it.

L+T: Why did you choose to fund the project via Kickstarter?
YW: So basically we’ve done Sneaker News for seven years and we’ve had a lot of success. We’ve become one of the best, if not the best sneaker information website out there. We’re read by millions of people. Over seven million people a month read our website and we’re closing in on three million followers on Instagram. So we’ve kind of gotten a lot of what we want online and with the magazine we kind of wanted to go after a new audience. With that in mind, I thought Kickstarter would be a great platform for us to see if we could reach an even broader audience, because not everyone who likes sneakers reads sneakers blogs. We really wanted to go after a new consumer and someone who would really appreciate something like this. I thought Kickstarter would be a fun place to jumpstart this buzz for the magazine. Kickstarter is a platform full of different kinds of people that just want to support young companies and support people who are doing interesting and cool things, so it may not just be sneakerheads who are interested in this magazine. We may be able to get some tech people or just normal business people who want to support new projects and who want to check out what this whole sneaker thing is all about.

L+T: Will there be additional SNEAKER NEWS volumes?
YW: Yes. We’re looking for this to be quarterly.

L+T: Will each SNEAKER NEWS volume have a specific focus?
YW: We want to celebrate sneakers as an art form and to also celebrate the people that surround this culture, so I wouldn’t want to theme this out. I do think that with the next volume we will have to theme it out just a little bit based off of the time period that we may be releasing it. So yeah, the next volume may have some kind of a theme, but I wouldn’t say that that is going to an ongoing trend. 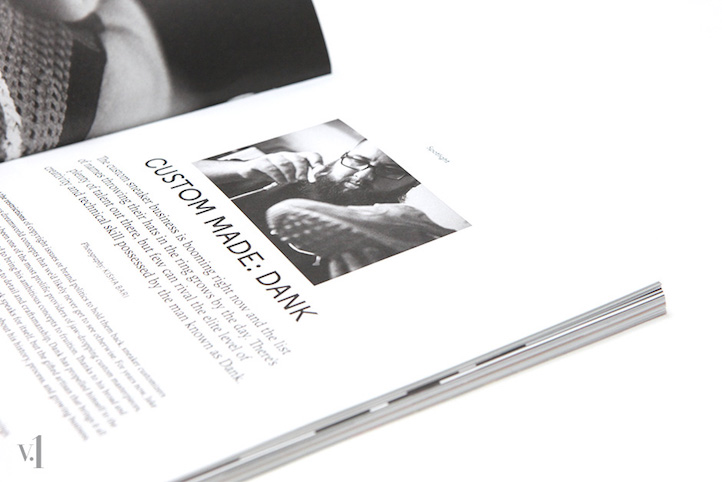 L+T: Why did you feel like now would be the right time to introduce SNEAKER NEWS Volume One, even though so many print magazines have been shutting down over the last few years?
YW: With Sneaker News we strive to be the best. We’re pushing ourselves on a daily basis to put content out there that is the best. We’re constantly thinking about new ideas that are not just release dates or pictures of the Air Yeezy. We really try to come up with interesting content and to create a platform for richer content and more in depth pieces. At the same time, because of how ephemeral the web is, anytime we put up something interesting or something well-thought-out that we spend hours and hours on it could quickly disappear. That’s because the next release date or the next big popular Air Jordan is going to be out there and may potentially cover over any well-thought-out and in depth feature that we put out there. And so we started off wanting to freeze this content that we’ve created. We want people to have this content in their hands and to want it forever. Once you put it on paper it can be there forever. It can be on your table. You can go back and reference it. SNEAKER NEWS Volume One is just the result of us really wanting to freeze this content that most people are just glancing at online.

L+T: With Sneaker News being such a force in sneaker culture, did you feel an additional pressure to get it right with this first volume?
YW: Very much so. We went all out once we realized who we had for the cover. We had to insure that every little thing in the magazine was going to be top-notch – from the writing to the photography. We actually created almost 90 percent of the content in there. Mostly everything in there, from the photography to the illustrations is original. We hired a top-notch designer and a top-notch production team. There was definitely a pressure to make sure that this was top-notch. We made sure we held ourselves accountable to that.

L+T: What has been the biggest challenge in bringing SNEAKER NEWS Volume One to life?
YW: I’ve been working in digital for almost twelve years now, and for almost twenty years I’ve been online. I first got on the web when AOL launched. I’ve basically been online forever. I love the web. I think it’s one of the most amazing things. But basically, I only know digital, so to go into print was a whole new world for me. The costs and the logistics of everything were incredible. I had never had so much stress in my life than trying to create this magazine. I think just learning print from scratch was probably one of the biggest challenges.