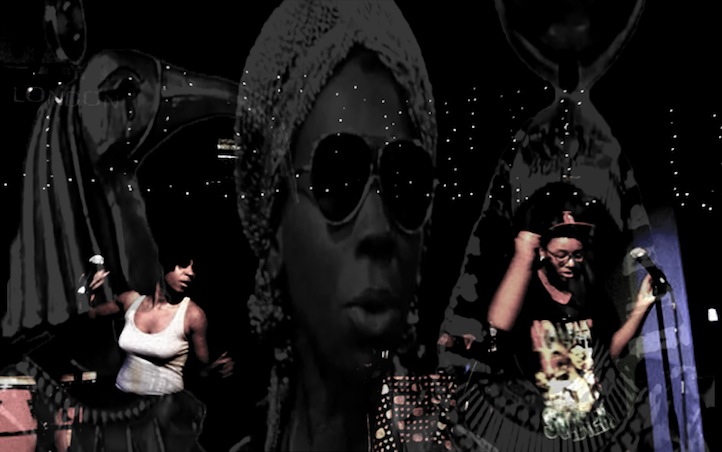 THEESatisfaction‘s Stas and Cat are are afro future throwbacks. They love and listen to music from the ’70s, ’80s and ’90s, before they were born. They’re a young, live-in couple as in love with music as they are with each other. The buzz for their debut album, Awe Naturale, is growing beyond their dedicated, core queer community. THEESatisfaction recorded their album in their hometown Seattle, partly in the basement of their comrade in sounds, Shabazz Palaces. Awe Natural will be released by SubPop, the Seattle indie label made iconic by Nirvana. Here they talk playlists, love and migration.

Life+Times: Which of you cooks and what?
Stas: I cook, a lot of stuff. I like to put garlic on everything. I also like spicy spicy blow your head off things.

L+T: Share clothes? This ever problematic?
Cat: We do. But we’ll get some outfits just for either one from time to time. I still snatch some of Stas’s clothes [laughs].

L+T: How’d you meet? How’d you discover you wanted to make music together, live together…and be love partners?
Stas: Catherine was a gift. I’ve always admired her voice, her charm and her shape. I used to watch her host a monthly open mic in the University District. Always fly, always quirky. We kept eyeing each other in different settings and finally made moves. I want to do as much as I can with her beyond music, living together and being in love.
Cat: Stasia and I have always shared a love for music and the arts.

L+T: Your Facebook stream is all music. Will one of you please give me five songs you’d use to crowd the dancefloor? And the other, five songs you’d give a friend if they told you they wanted to make a baby that night?

L+T:What’s your family’s migration story to Seattle like?
Cat: My parents are originally from New York. My dad’s side has roots in Virginia and South Carolina, while my Mom’s side is rooted in New York (late 1800’s) and North Carolina.
Stas: Mother’s side from San Antonio, TX moved up to Tacoma, WA in the 1970’s for work, Father’s side originally from Arkansas made the move for jobs at Boeing and military housing in Fort Lewis, WA.

L+T: What makes Seattle kids so damn creative?
Cat & Stas: It’s the water, from the ocean, lakes, sky and tap.