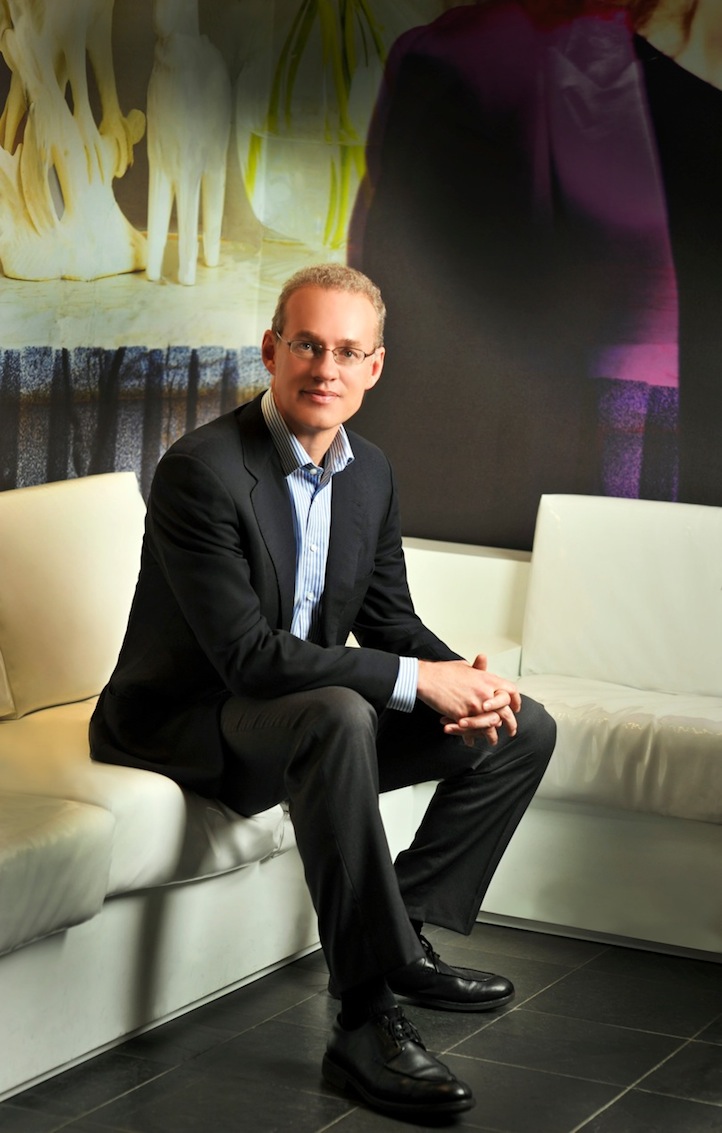 Per location, The Gilt Groupe makes more in revenue than any department store in the world, and this is before we hear how its latest site – Park & Bond, the company’s first foray into full-priced retail, adds to the equation. Gilt now sells food, wine, custom vacations, $30,000 weddings-in-a-box, and the odd Volkswagen or two in addition to supplying able bodied Americans with a daily dose of designer duds directly into their inbox every single day. Gilt is a force to be reckoned with not just in the fashion retail industry – it is so much bigger than that, and so is its enigmatic CEO, Kevin Ryan.

Ryan is a serial entrepreneur, a graduate of the INSEAD, and a member of the Yale International Council and the Council on Foreign Relations. He sold Double-Click to Google in 2005. He’s the chairman and founder of The Business Insider, one of the fastest growing news outlets in the online world. He owns a third company, 10Gen, whose Mongo database is the de facto choice for several of the world’s most famous startups, Foursquare and Craigslist included. Ryan says that 10Gen is a bigger business than Gilt – something to consider when you’re complaining that you’ve got a lot on your plate.

Life+Times: Where did you first conceive the idea for the Gilt Groupe?
Kevin Ryan: I saw the idea work in Europe first with Vente-Prive in France (my wife is French). Gilt has no relationship with Vente-Prive at all, but I saw their model – marketing merchandise and selling inventory at the same time, and thought it was great for those people who just can’t make it to the Marc Jacobs sample sale but would be buying if they could. I thought, “this really should work in the United States,” so we tried it, though upscale and in a vastly more segmented manner than Vente-Prive.

L+T: The idea of making a discount site cool is something that few have been able to achieve. How did Gilt do it?
KR: I don’t think it’s ever been done. Century 21 or TJ Maxx are not luxury stores, they are true discounters. With Gilt our buyers are incredibly selective and we pay a lot of attention to the products we select and how we portray them to buyers. The right mix of well-respected brands is key, but we spend a lot of time and money on photography. In the beginning, we were spending $7000 on photo-shoots for sales generating $3000.

L+T: In early phases, it seemed like Alexis and Alexandra were the faces of the company and now it seems you have taken a more public role. Was that by design?
KR: The idea for Gilt was mine. The first two people I hired were engineers. Three months in I hired Alexis, then two months later, Alexandra. Gilt was, at first, a women’s clothing destination, and I just wasn’t the right person to represent the brand. Alexis and Alexandra were integral to the success of Gilt because I wasn’t the right person to represent the brand. Overtime I was able to sell off the companies I was involved with and now that Gilt is more of a lifestyle brand, it makes more sense to come back in as CEO.

L+T: Gilt has hired several high profile editors and tastemakers – Tyler Thoreson formerly of Men.Style.com, Josh Peskowitz from Esquire, and Nick Wooster – to built out editorial on what is an unabashed commerce site. Is the traditional journalistic separation of “church and state” a thing of the past?
KR: There is no church and state here. Everything we do is editorial with the goal of selling things. There are no advertisers like there are with other groups producing editorial like Gilt. But we can produce content about our products because we can honestly say everything we buy for Gilt is really good stuff, and stuff people should buy. We pass on hundreds of things each day. Also, our editorial team has gotten so much exposure because people in the media love to write about other people in the media. In truth, we’ve hired just ten guys to do editorial out of over 750 employees. We have 120 engineers and more people doing personalization than editorial, but people don’t write about that.

L+T: How do you decide what will work on Gilt and Park & Bond and what won’t?
KR: We look for great brands. A brand like Rolex will sell on its name alone, so that’s a great product for us. We also look for up and coming brands that fit our taste. Taste is what sets apart. We do the shopping for you, and then we package it well.

L+T: How do you package it, specifically?
KR: Our strengths lay in three things: great brands, strong curation, and great photography. We look for things that are high-end but not too high-end, and then offer just a better experience. For example, we send out 2000 different emails every single day based on the customer’s preferences. I have a technology background and our customization ability is very strong – we put the right things in front of the right people. Also, the Gilt brand is very strong and no one else in the world sells both travel and dresses, like we do. But even though we sell things in a wide range of categories, our products have to be consistent. Commodity books aren’t consistent with Gilt; we won’t challenge Amazon in books. But we have in high-end home goods, and we do it better than Amazon. We aren’t really into electronics because the margins are so tight.

L+T: Tell us about some of your other categories that are doing well.
KR: Take Jetsetter as an example. Not a single hotel will go onto our site until somebody from Gilt goes there. An offering from Gilt is an endorsement, too. Gilt taste is already the number one gourmet site, ahead of both Dean & Deluca and Harry & David. Our shoppers aren’t discount shoppers – they aren’t Wal-Mart shoppers – they are buying nice things. But we don’t jump into anything blind. We like to see 50 million in sale over two years in one category before launching an entirely new vertical. We did fifteen food sales before we launched Gilt Taste. This year we might do one or two new verticals. Our bridal sales have been really interesting.

L+T: In what way?
KR: Well, we put up a “wedding in a box” – a package that included a pre-selected dress, location, caterer, and everything else you’d need to book for a wedding – and priced four of them at $30,000. They sold in 11 minutes and we had 67 people on the waiting list.

L+T: Who are the people looking to buy a $30,000 wedding in a box? Who is the average Gilt shopper?
KR: The average Gilt shopper is a 34-year-old woman that lives in New York City, but that’s not every Gilt shopper. Our target market is 27-40 year olds who tend to live in urban environments. The invitation model was reliant on people who out of 20 of their closest friends, 18 live in New York.

L+T: Park & Bond is totally different from the rest of the Gilt family – it’s full-priced and it’s not about timed sales. How will it work?
KR: Gilt is very strong with men. We do more men’s revenue than any department store, and that’s before we include what we do on Park & Bond. We see about $90-100 million in revenue while Saks, for example does $25m. While urgency and scarcity have been a big factor in the sales at Gilt, it’s not everything. For exactly, we don’t have urgency or scarcity with Jetsetter and things have been selling very well. A lot of gilt isn’t urgent, some things don’t sell out. And, although we launched as a discounter, many of our products are listed at full price, so Park & Bond being full price isn’t a big deal. Sometimes we sell because of our price, some times we sell because of availability, but a great shopping experience is paramount, and we always have that.