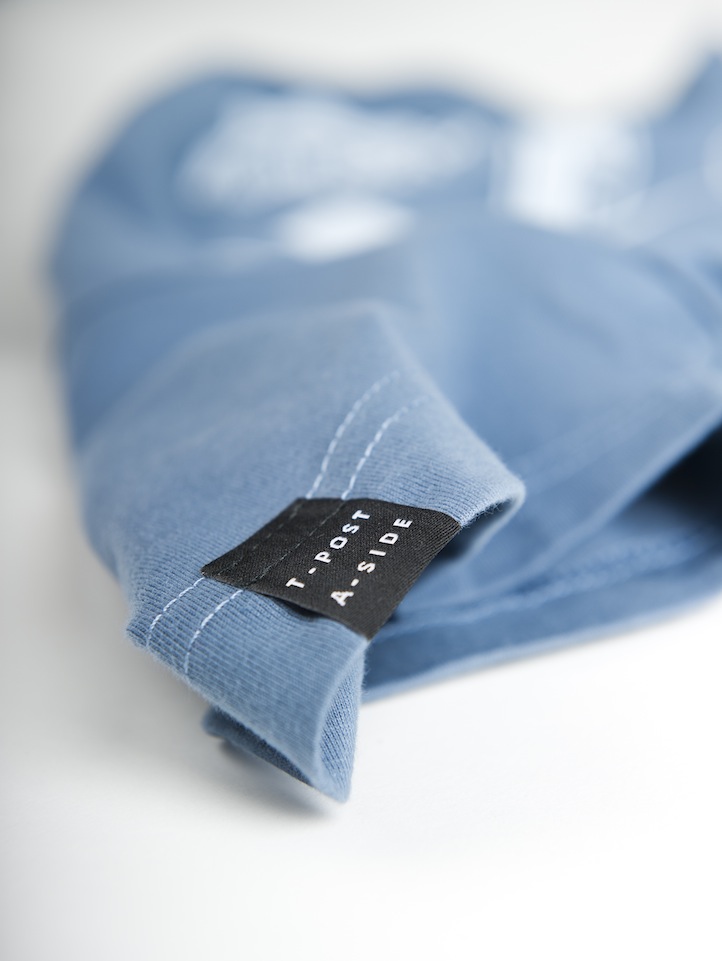 With headlines ranging from the increasing trend of miniature pet owners globally to pertinent discoveries by neuroscientists and everything in between, T-post, the Swiss based wearable monthly magazine, vows to educate both the subscriber and his or her encounters by graphically interpreting news and printing it on T-shirts. “You can say that our wearers are washing our stories from any unintended or intended bias, making them bullshit free,” states T-post’s Editor-in-Chief and Founder, Peter Lundgren. Lundgren sits with Life + Times to discuss the inner workings of T-post, the significance of following your instincts and the potent impact the tees have had internationally thus far.

Life + Times: With the start of your concept back in 2004, did you encounter colleagues or investors that thought the idea was too unconventional to market to a worldwide audience?
Peter Lundgren: Everyone I talked to in the beginning loved the idea, but most didn’t see a wider audience for it. Let’s face it, who would buy clothes they haven’t even seen yet; simply trusting us to deliver something great and interesting? But my gut feeling was that if the idea and execution was good enough, it’ll build a worldwide audience. Since everyone loved the idea, I was the only one that could mess up the execution. I could definitely live with those odds.

L+T: How did you come up with the idea of combining news with tees?
PL: It all started with the idea of trying to rewire the structures of news communication. We started concepting ways to engage people in an important topic and our favorite garment, the t-shirt. It seemed like an ideal media for doing so. T-shirts inspire conversation and when you add a story behind them, you get people thinking. By combining a news magazine with a t-shirt we’re able to utilize the attention and commitment accustom to the fashion world while communicating interesting news topics. By putting the written story on the inside of the tee just for the owner to read, the wearer is really the one communicating the story and getting it to spread outside the T-post circle. The story becomes their own and it all depends on how they choose to talk about it.

L+T: You have partnered with established designers ranging from Tokyo-based creative director and art director, Yuji Tokuda to talented up-and-coming designers. What is the process of choosing designers?
PL: To keep T-post interesting we work with a new designer each issue. Me and my creative director, Giuliano Garonzi, put a great deal of effort into searching for new talents and interesting looks all over the world. Always trying to be on to the next, mixing world renowned artists with up-and-coming names and keeping a constantly expanding library of who we think have the most interesting looks for the time being. The designer is always matched to the nature of the story.

L+T: The latest issue’s focal feature is a column and correlating graphic based on the late Adam “MCA” Yauch of Beastie Boys. Tell me about the making of a T-post tee from start to finish.
PL: It all starts with the news editor. He’s the guy that scans the globe for the best T-post stories out there. He keeps in touch with news blogs all around the world, scans newspapers and connects dots from stuff that’s happening all around the world. He brings to the table a whole bunch of different ideas on stories to run. From there, the whole editorial team sits down and decides on which story to run and on which pieces we want it to contain. A T-post story often consists of two or three different news stories and reflections that we think have some connection to each other and are intriguing enough to tell our readers about. Our stories usually end up living somewhere in between a news story and a column, but trying to objectively show all sides of the story. 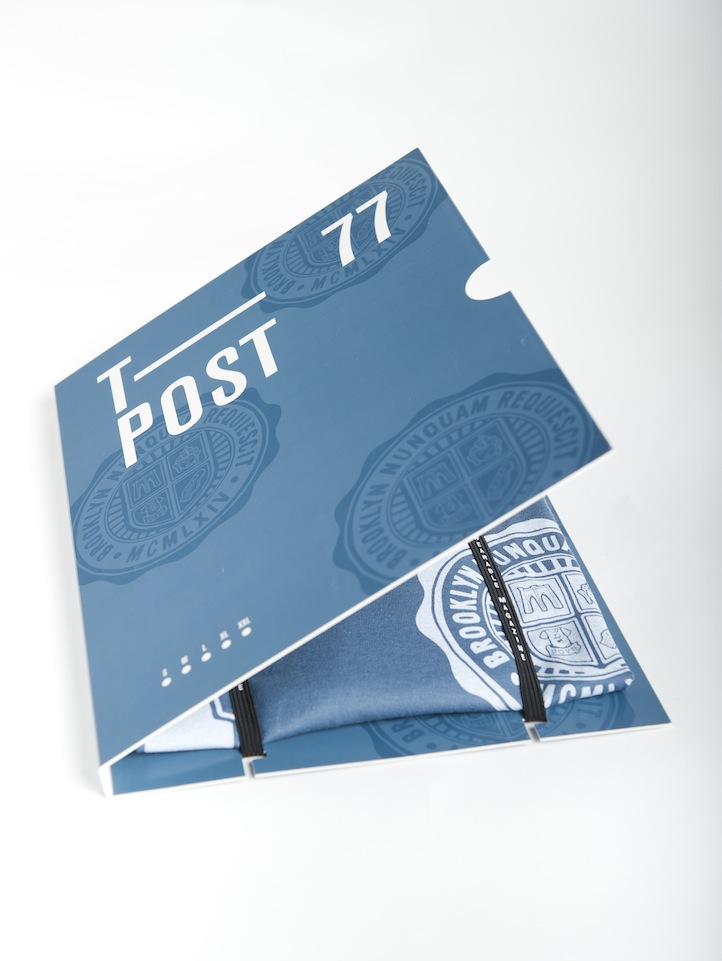 When we’ve written the editorial piece, we choose which designer we think could best portray that particular story, and we contact him or her. That designer then gets to do an interpretation of our written story. So, he or she is the one translating our story into a visual for people to react on until our next issue when a new designer takes over. 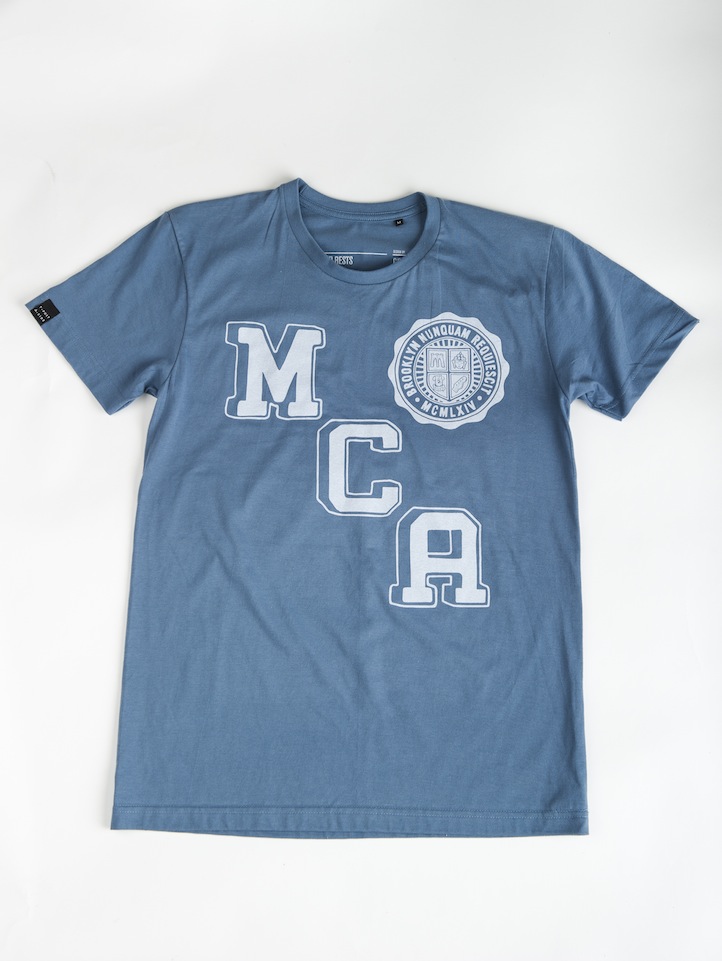 To maintain control over the quality and cut of the tee, we produce our shirts ourselves. The printing, however, we do locally to make sure it’s done exactly right and from here all the shirts are also packaged and sent out to all our customers in over fifty countries. 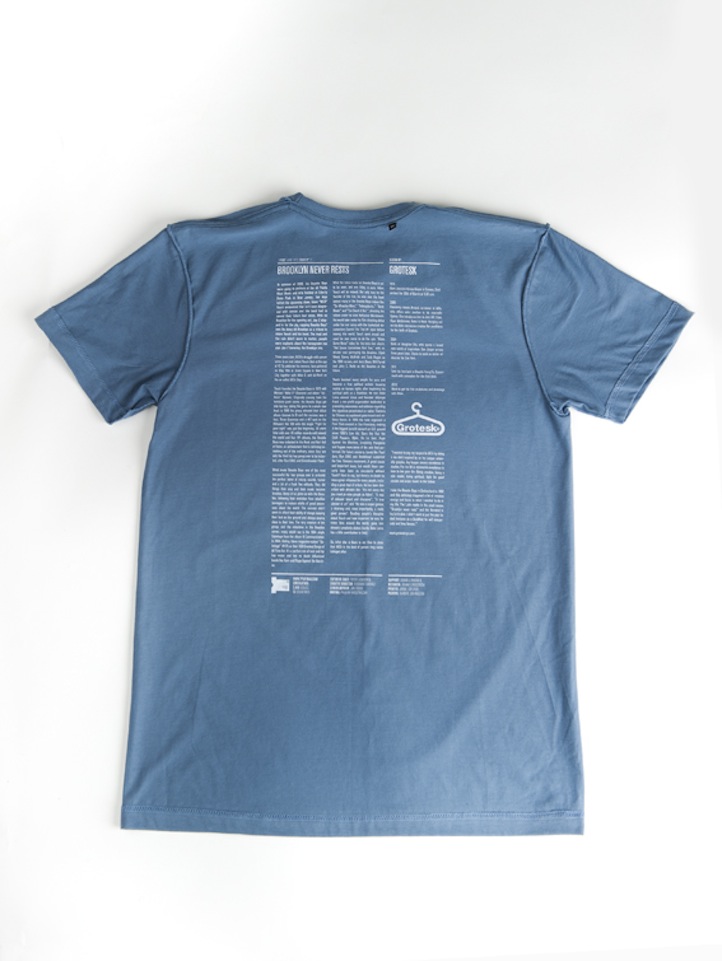 L+T: How does your team determine the headlining news to feature on a t-shirt each month?
PL: The best stories for us are the ones that really engage people. When I read a story that I just can’t stop thinking about and want to grab someone off the street, simply to hear his or her opinion on it…that’s the kind of stories I’m striving to put in our issues. 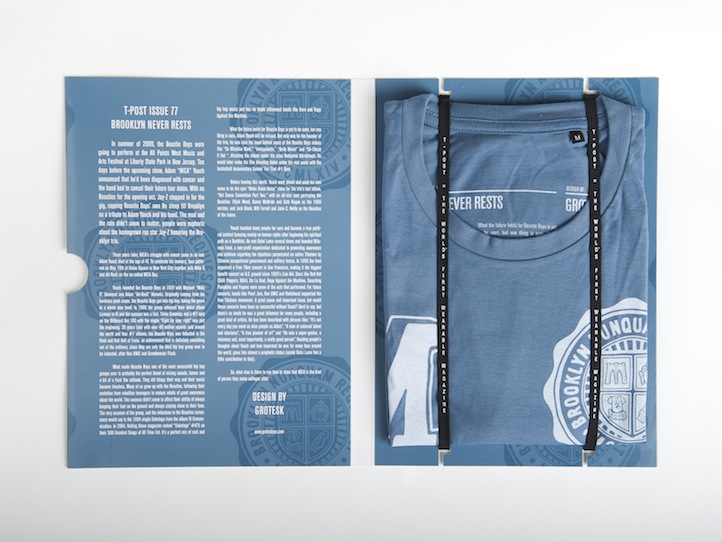 L+T: What enables you to balance newsworthy pop culture updates with more serious news headlines as features?
PL: To make a good T-post shirt it needs to be both interesting and wearable. When you wear a tee, you stand behind whatever’s on it, whether you like it or not. It’s okay to read interesting serious stuff in a newspaper, but to wear it on a tee, that’s a whole other ballgame. Interesting and wearable is key! Well, it has to be rad looking too or else it will never see the light of day. It’s hard to inspire conversation from the bottom of a drawer.

L+T: Interestingly, you didn’t choose traditional marketing to introduce T-post. Without the aid of banner placements and billboards, how were you able to raise awareness of your concept magazine?
PL: I’ve always laid our focus on doing interesting and nice looking t-shirts and I guess people have liked what we’ve done and they’ve told more people. We’re talking about how T-post’s wearers are washing our stories from bias when they talk about T-post, but by doing that they’re also doing the best and most honest promotion a brand could ever get: word of mouth, better than any billboard or banner could ever do. So, lucky for us it’s in the nature of T-post to talk about T-post. Spreading the news one t-shirt at a time.

L+T: T-post takes the traditional magazine to a more community level by presenting the news inside and outside a tee with a bold design. What is the overall response to the idea in regards to your goal for the tee to be a conversation starter? Do you find yourself engaging in more conversations with strangers just by wearing the tee?
PL: We get e-mails all the time from people telling us all about their adventures with our shirts. How they get in contact with people they would never have met if it wasn’t for our shirts. Just the other day I got a long e-mail from a guy telling me a story about him and one of our tees. Not to go too much into detail, but basically he explained in detail how he showed up at a party wearing one of our tees, getting into a discussion with a hot girl and because of that discussion ending up getting laid that night. From the start we knew that T-post could be a good conversation starter, but we could never have dreamt it would have the impact it’s having and how much people love to discuss a good tee.