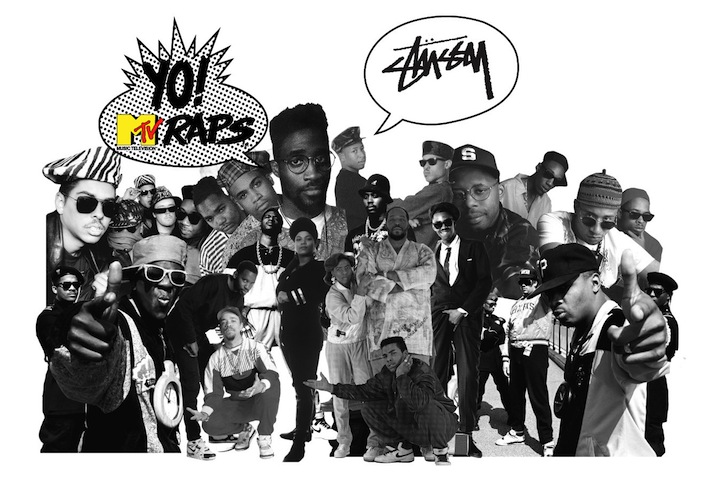 The similarities between streetwear and Hip Hop are undeniable. Introduced as underground alternatives to their mainstream counterparts, both served as an outlet for self-expression, rebellion and those fighting for their place in society and both subsequently began setting the standards for what would be accepted as mainstream. With such parallel histories it’s no surprise that Stussy and Yo! MTV Raps, two brands extremely instrumental in the development of both streetwear and Hip Hop have partnered for the Stussy x Yo! MTV Raps Collection. Released to coincide with the 25th Anniversary of the Hip Hop staple’s debut, the collection of T-shirts and hoodies feature iconic images of Hip Hop legends and pioneers Eric B., Rakim, Slick Rick, Public Enemy, De La Soul, Queen Latifah, Brand Nubian, Gang Starr, MC Lyte, Ice-T and Digital Underground. Here, Stussy’s Art Director Adam Weissman, who also served as Creative Director for the Yo! MTV Raps project speaks to Life + Times from Tokyo to discuss Yo! MTV Raps‘s influence on him growing up, how streetwear and Hip Hop were “born out of the same foundation,” and how Beavis and Butt-head made Stussy’s latest collection possible.

Life + Times: How did the collaboration with Yo! MTV Raps come together?
Adam Weissman: It sort of started with this project we did a couple of years ago with MTV for Beavis and Butt-head, which was successful. Everyone from MTV’s side was happy with it. We were happy with it. We went over there for a meeting one day and they mentioned the 25th Anniversary for Yo! MTV Raps was coming up and asked if we would want to do something for it.

L+T: Were you a big fan of Yo! MTV Raps growing up?
AW: My whole life was started from watching Yo! MTV Raps. It played such a major role in my childhood and me learning about clothing, fashion, style, art, music and culture. It all came out of me listening to Hip Hop music and at that time Yo! MTV Raps was pretty much the only place for me to see Hip Hop, especially in the early ’90s. There was no Internet, and the Hip Hop that was played on the radio were the more commercial, bigger songs. Yo! MTV Raps definitely played the more underground stuff. That all spoke to me as a kid, so I immediately had an idea of what we would do if we were doing the Yo! MTV Raps thing and it came back around that MTV was sort of ready to go. Everyone loved the idea I pitched and that’s basically how it happened. 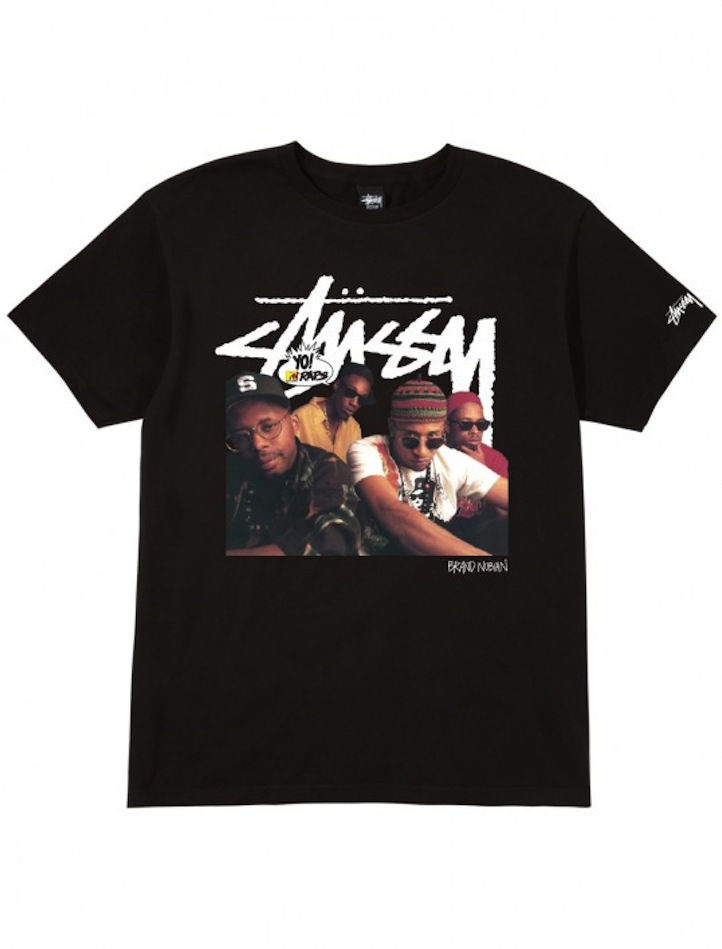 L+T: The rappers featured in the collection represent a very specific era in Hip Hop. How does that era tie into what the Stussy brand represents?
AW: I feel like Stussy and Hip Hop were sort of born out of the same foundation. They were both very “Do It Yourself.” When Hip Hop was born and as it grew there wasn’t any “Hip Hop industry.” When Stussy started, there was no “streetwear” industry. They both built their own paths and opened doors for people that came after them. I see the connection there. Stussy has always been a brand that references, and is influenced by many, many cultures. I feel like that’s something that’s prevalent in Hip Hop, whether it’s sampling records or the way Hip Hop has spread throughout the world and how that has come back and influenced Hip Hop. It’s the same way Shawn Stussy – when he started Stussy – was a surfboard shaper in Laguna Beach, and then started traveling to New York, London, Tokyo, and Paris and all of the stuff that was going on in those places influenced him. He was sampling from other cultures, so he would take a little bit of surf, a little bit of skate, some reggae influenced stuff and some Hip Hop influenced stuff. Stussy was an underground brand the same way Hip Hop was an underground music genre.

L+T: We noticed the collection only consists of only Tees and hoodies.
AW: Yes, just T-shirts and fleece hoodies. This collection didn’t call for more. I really wanted to keep it about the rappers that deserve the recognition for being pioneers and coming out of that era of Yo! MTV Raps and setting the stage for what Hip Hop is today. I wanted to take the iconic imagery from that era and do bold T-shirts – the same type of T-shirt Stussy would’ve done back then – and I wanted them to feel timeless, because to me, that era of music is timeless. Just like The Beatles and The Rolling Stones are timeless, Eric B. & Rakim and timeless. To me that is what this all represents and so we wanted the collection to be just tees and sweatshirts. We did do these trading cards, which are giveaways. When you buy a shirt you get the trading cards. Instead of getting a lookbook or catalogue, you’ll get a pack of the cards. They are going to be at all of the stores as a limited run and they are based on the original Yo! MTV Raps trading cards. They are all redesigned and all the photos are the photos that we used for our tees. We thought it would be a good way to represent the entire collection. It also resonates with people who remember those cards.

L+T: It seems like the collection dropped out of nowhere. Why did you guys decide to take that approach as opposed to offering previews or teasers leading up to the collection’s release like brands normally do with major collaborations like this?
AW: It isn’t unusual for us. I guess what makes it unusual is that it’s a bigger collection with ten designs, which all had a lot to do with timing. This project took a really long time to get everyone involved on the same page, so that alone sort of put a little bit of a time crunch on the everything. Plus the collection had to come out on [August] 9th, because the very first episode of Yo! MTV Raps aired August 6th, 1988, and Stussy always releases items on Fridays, so an August 9th release was very important. Also, I still like the element of surprise. I feel like that is missing from everything. If you’re excited about an album it will most likely leak before you have a chance to go and buy it. Everything is sort of spoiled. I come from the era where you had to go out and find something. To buy Supreme you had to search and find the store that sold it. If you wanted a pair of Nikes you wouldn’t go on eBay – you would call every Footlocker in the city to find your size and then get your parents to drive you there. That element of surprise and that research for me is fun, and that’s sort of what we wanted to do with the marketing for this. The cards to me were like the introduction or a preview. You were able to see who was involved without knowing exactly what you were going to get. 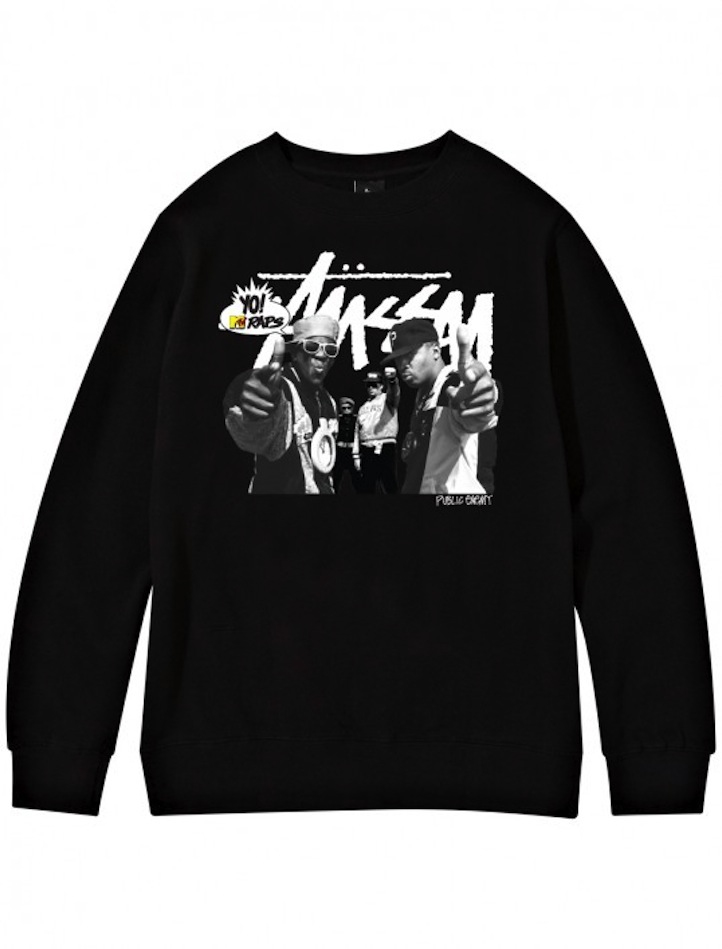 L+T: Were the artists very involved in the creative process?
AW: No, I sort of did everything. How it worked was I would find a photo I wanted online, we’d mock it up, send it to the artists for approval, track down the photographers – who actually took the photos, and try to find the negatives or some sort of hi-res scan of the photographs, which was pretty impossible. The saddest thing that I learned while doing this project is that there isn’t a lot of archiving done for old Hip Hop. I tracked down Bart Everly – the photographer that shot the first Queen Latifah cover – he was totally cool to sign off on it, but he didn’t have the negatives. Tommy Boy Records had the negatives, but Tommy Boy doesn’t exist anymore. It became an issue, because I wouldn’t know where to begin to track down the photos. This was the case with almost all of the photos we used. It’s the same thing with music videos. No one archives old music videos, so the rappers weren’t really involved, because they don’t really own those photos. The photographers own the photos and the record labels own the album covers. It’s been a crazy past few months [laughs]. 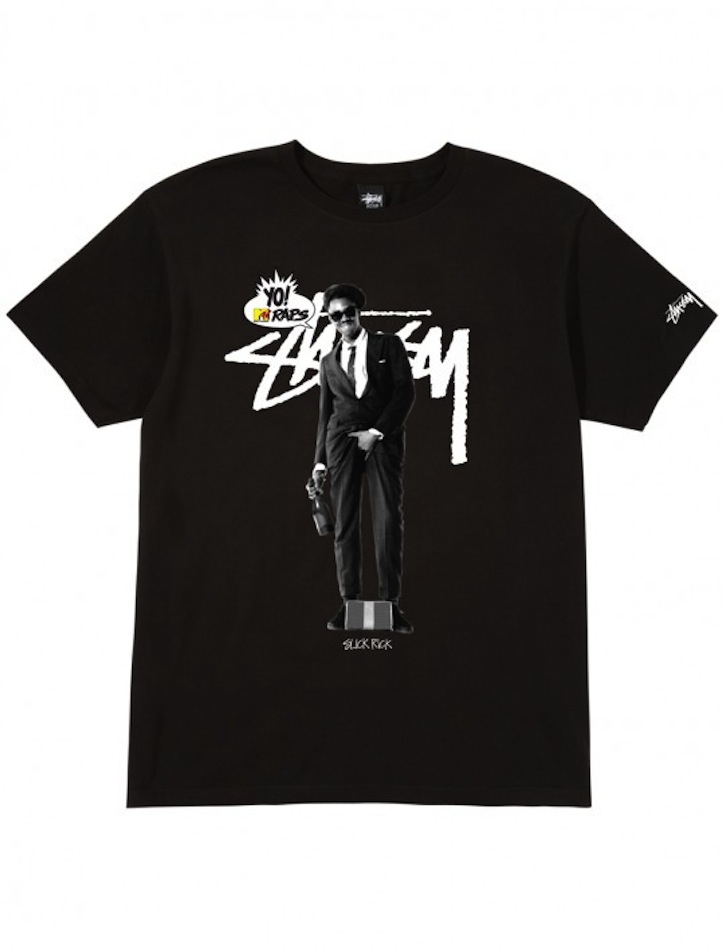 L+T: As far as collaborations go, what does a brand have to bring to the table for Stussy to consider working with them on a collection?
AW: It just has to be the right fit. It just has to make sense. Stussy is a pretty consistent brand and over the course of its 33 years, our core values still haven’t changed. Stussy is still big, but not huge. I think that’s what sort of keeps us grounded. Usually the collaborations come from Stussy approaching another brand with an idea. The Beavis and Butt-head thing was something I pursued. They did not come to us. That’s sort of what led to this Yo! MTV Raps thing. I don’t think MTV would’ve automatically gone with Stussy for this Yo! MTV Raps thing without the Beavis and Butt-head project happening, because there are a lot of bigger brands out there that have way more avenues available than Stussy. They connected with Puma for the 20th Anniversary, but they saw how cool and well executed the Beavis and Butt-head project was and how good that was for the brand and I think that’s why this collection was able to happen.

The Stussy x Yo! MTV Raps collection is available here.