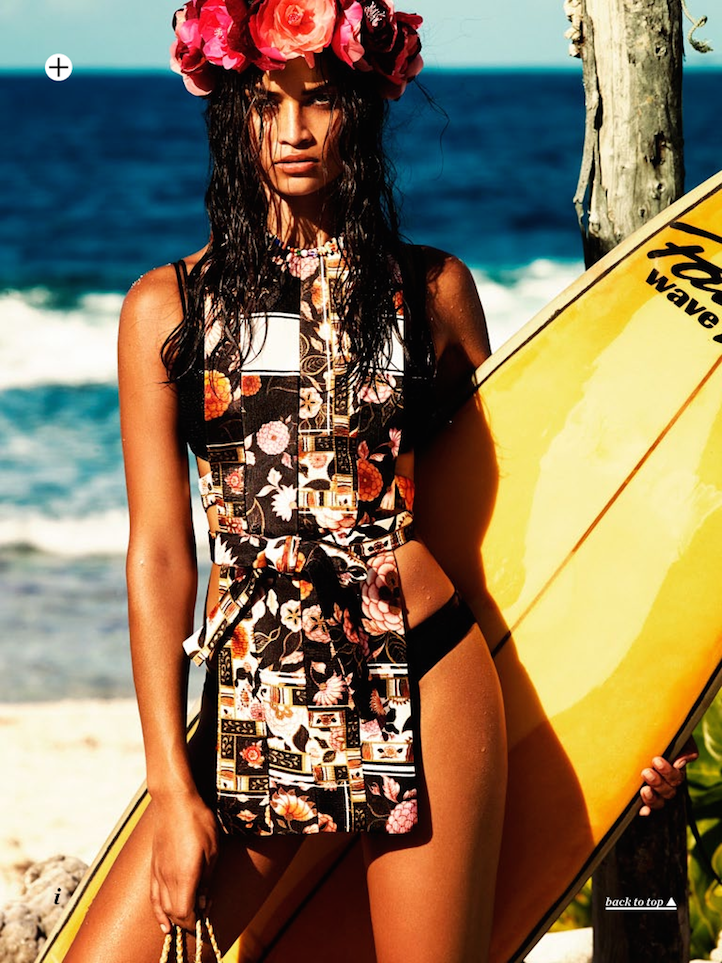 Growing up in Melbourne, Australia, Victoria’s Secret model Shanina Shaik never saw a face like hers on the covers of teenage fashion magazines she’d buy every month. The Land Down Under has traditionally put forward a very singular image when it comes to beauty, and Shanina wasn’t it. “In Australia, I had no one to look up to,” says the current New York resident, in her Hells Kitchen high-rise apartment with picture-perfect views of the Hudson River. “I get asked all the time about who inspired me growing up and I can’t give one name. I never saw anyone who related to me.”

Magazine covers, fashion show runways; these are the places “where a lot of young women get their idea of beauty from,” commented Veronica Webb—the first Black supermodel to score an exclusive contract with a major cosmetics company (Revlon) in the ‘90s—to The New York Times last year when speaking on the industry’s lack of diversity. “When you see someone that looks like you, it makes women feel beautiful, and it makes women feel they belong.”

Now a New York Fashion Week regular, who’s shot for magazines like Harper’s Bazaar, done campaigns for brands like Sephora, Miss Sixty and Ann Taylor LOFT and of course, starred in the Victoria’s Secret Fashion Show alongside her self-described “woman crush” Adriana Lima, life was very different for the almost 23-year-old Shaik not too long ago.

“Being a darker skin color meant I was treated horribly when I was growing up,” she says. “I look at Australia as a multicultural country where our differences make us special, but unfortunately not everyone back home holds that view. Because of this, the rest of the world doesn’t see us as the melting pot we truly are. With my career most people ask me where I’m from and when I say Australia they always follow-up with, ‘But where are you really from?’ It’s so sad. Because I’m not Caucasian with blonde hair, I can’t be Australian?”

Shanina’s mother is of Lithuanian and “Australian” heritage; “Australian” used as a provincial term to denote those with British ancestry from earlier times, a dangerous label at best. Her father was born in Singapore, of Pakistani and Saudi Arabian background. While the overwhelming majority of Australians boast European ancestry, the abolition of the White Australia Policy in the mid-1970s led to a significant increase in immigrants who like Shanina’s father, were mostly from Asia and the Middle East. Australians today identify with around 300 ancestries and speak just as many languages, however a reflection of this in mainstream media is yet to occur.

“The level of inter-cultural knowledge in Australia remains extraordinarily low,” observed University of Technology, Sydney Professor of Sociology Andrew Jakubowicz in his 2010 paper, “Race, Media & Identity in Australia.” “The media and entertainment industries for the most part ignore the issue altogether. There’s a crisis of recognition of diversity in public culture in Australia, one that gnaws at the heart of the country. It is racism at its most systematic, unselfconscious and destructive.”

Girlfriend is a popular magazine for young women in Australia, and for Shanina the publication represents a milestone in both her personal and professional life. “I experienced a dark period of bullying in my life during my high school years. Towards the end of it, Girlfriend did a special issue on the subject, asking readers to share their experiences. I had just started to get over it all and I needed to vent, so I wrote to them. I never thought they would publish my story, but they did. The main bully saw the article and gave me so much grief about it, but by then I was sticking to my guns. I felt amazing and so much better. Later that year, I’d worked up the courage to enter the magazine’s national talent contest, where I got my official start as a model and eventually signed to Chic Models, my first agency.”

The bully in question was the “typical Regina George character in Mean Girls.” Shanina’s voice falters and her ever-present smile disappears as she speaks on the experience. “She was blonde and pretty and everyone liked her. Everything she did to me was racially motivated. Because of my skin color and the hip-hop music I liked, I was picked on. I was considered ‘Black’ in our friendship group and therefore not good enough for them. They called me the ‘N’ word and taunted me with it every day. It almost became a joke, how regular the abuse was. Then other girls started in on it and no one stood up for me. These were my supposed friends, mind you. If there were a party or event, I was the only one in the circle who wasn’t invited. Whenever I would speak, they would tell me to shut the fuck up. My boyfriend was Polynesian, so to them he was a ‘Black boy’ too. It was always about race. It wasn’t so much my newfound modeling career, because I never talked about that. I was always made to feel like I should never be proud of that. I was embarrassed and started beating myself up because I thought I was imagining the abuse. I thought bullying was solely a physical thing; I had no idea verbal abuse was even worse, so I just let them keep going. My self-esteem vanished. I felt like I wasn’t good enough for their friendship and I started to believe what they were saying was true. I stopped going to school for months. I just wanted to hide.”

Shanina eventually worked up the courage to tell her mother she’d been absent from school due to the bullying. She was now failing all her subjects, even though she was in accelerated classes. Her teachers were immediately notified, but no official action was taken. “Mum had to teach me to fight my own battles and not count on anyone to help with them,” she recalls. “She prepared me for the backlash now the bullies knew we’d alerted the school. Her biggest lesson was to ignore their hatred. She taught me when you act as if they don’t exist, that’s when things shift. They become frustrated because it’s not working anymore. Bullies thrive off your reaction to them and when they don’t get what they want, that’s when they back off.” 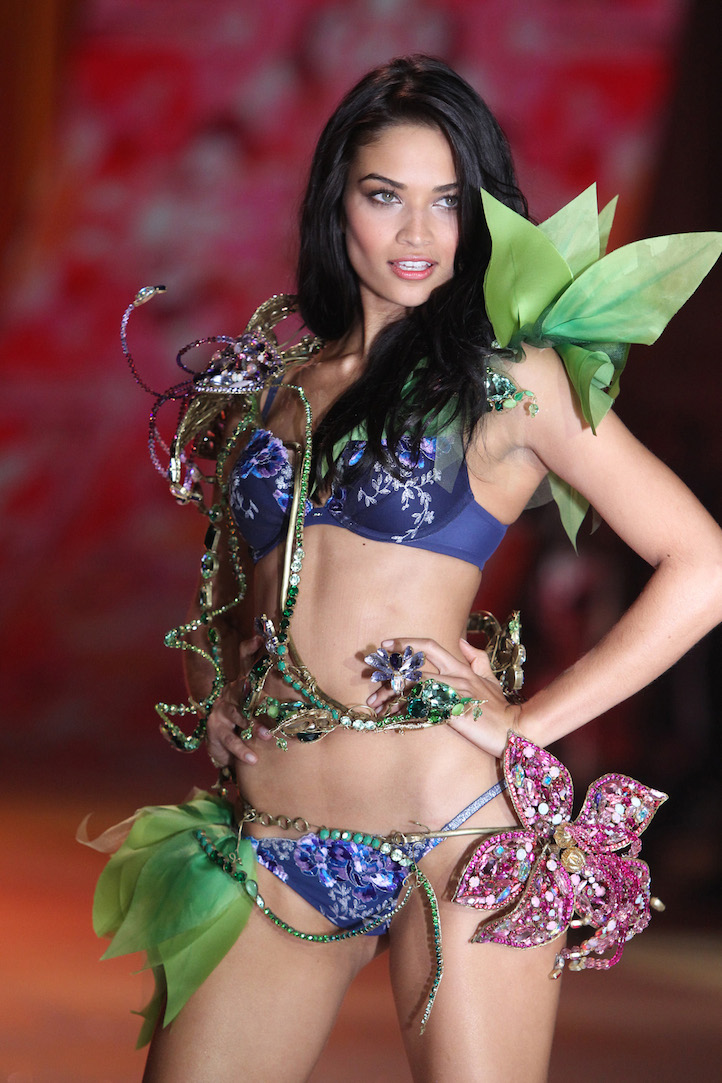 The 5’9” tall beauty found her escape in modeling. “I enjoyed being in front of the camera from the moment my first pictures were taken. When I got my start as a model I was down on myself and completely lacked in confidence, but for some reason I loved it instantly.

“A lot of people ask me in interviews, when did you realize you were beautiful? To me that’s a silly question. It wasn’t my ‘good looks’ that separated me from anyone else. A lot of young girls might look at me and say things like, ‘The pretty girls don’t get picked on.’ But that’s not the case at all. We all get picked on, no matter what. You could be the best looking, talented and smart and still be abused. Bullies come from a place where they confront those who are easy targets, meaning they see any insecurity you might have and drive them home. The fact I was bullied made me a beautiful person. It allows me to share my experiences with young girls who may be going through the same situation.”

“You have to realize you’re unique and important, despite what the people around you may say,” Shaik’s close friend and fellow Victoria’s Secret model Jasmine Tookes, 23, shares. The African-American, white, Brazilian and West Indian stunner, who had Oprah Winfrey cooing “Rub your face against mine!” while describing Tookes’ “buttery smooth skin” after a Ralph Lauren fashion presentation in 2011, is today optimistic despite her own experiences with discrimination. “It can be exhausting sometimes to remain true to yourself in an environment where everyone expects you to be something else. I’ve realized being different is one of the most beautiful things on earth. Believe in your personal power.”

While they share a positive attitude towards their challenges as minorities in the fashion world, models like Shanina and Jasmine continue to face discrimination. According to a study by Jezebel.com, following last year’s New York Fashion Week, there were a combined total of 4,479 opportunities for a model to walk the runway or pose in a presentation during 151 shows. A whopping 82.7% of those opportunities were granted to white models, while Asian models nabbed 9.1 percent, Black models were hired for six percent, non-white Latina models had two percent and models of other races wore 0.2 percent of all looks.

Numbers like these are why fashion activist and former model Bethann Hardison created the Diversity Coalition, a group that sends written petitions to the governing bodies of Fashion Week in New York, Paris, London and Milan to improve the balance of multicultural faces. Their missive reads in part, “Be open-minded to models of color. Make an effort to add diversity to your lineup. Our objective is to make a shift on how the model of color is viewed, so it becomes natural to see them participating each season in a greater number than seasons past.”

Shanina’s rising profile is slowly changing the idea of beauty in her home country, and she’s starting to realize the magnitude of her role. “The fashion industry has always spoken about the need for more diverse models and I’m happy to be part of that conversation in Australia. Things are slowly starting to change, but they need to change a lot more. I’m of Pakistani and Saudi Arabian heritage, which you don’t hear or see about in mainstream media back home, so to be featured on the cover of local fashion magazines like CLEO is huge. Myself and others are changing the perception of what it means to be Australian and I couldn’t be more proud.”