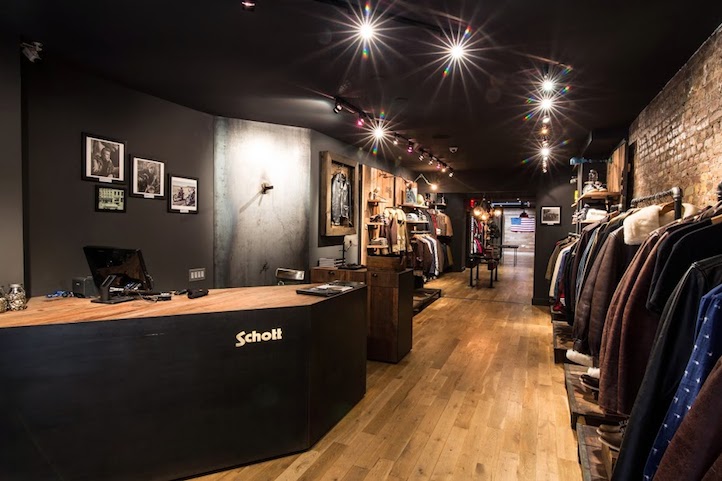 Schott NYC recently opened its first New York store in over sixty years. Located at 236 Elizabeth Street, it’s only blocks away from the original factory’s Lower Eastside location. “We started a hundred years ago less than a mile away from here,” says Jason Schott, the company’s Chief Operating Officer and great-grandson of founder Irving Schott. “For us, it’s really exciting to come back to the neighborhood where it all started.”

Revolutionizing American style for a century now, Schott NYC has come to symbolize rebellion, freedom, and cool. The outerwear maker introduced zippers to jackets, modernized the motorcycle jacket and outfitted American soldiers with bomber jackets during World War II. Almost all Schott NYC products are manufactured here in the US using some of the actual machinery found in that original factory. “There’s a handwriting to what our machines do that you can’t get on stuff made in China.” says Schott. Preserving that heritage and maintaining core values is clearly an integral part of what has kept Schott NYC from going out of style for so long. While checking out the new store, Life+Times spoke with Jason Schott about the recent collaborations with streetwear staples A Bathing Ape and Stussy, longevity and not chasing trends.

L+T: The story of the Schott family epitomizes the American Dream. Through determination, hard work, talent and a vision the sons of immigrants were able to build an empire. Is that one of the reasons why the “Made in America” label is so important to Schott NYC?
JS: Absolutely, but also my great-grandfather had a tie clip that he would always wear with the acronym YCDBSOYA, which stands for “You Can’t Do Business Sitting On Your Ass” and that’s the way we were taught. That was the culture passed down from generation to generation. You get nothing because of your name. It’s like there’s a broom and earn your way. That’s how my grandfather worked. He was coming into the office until the age of 94. He really took a lot of pride in what he did and he taught that to the rest of us. For us, our name goes into everyone of these jackets that we’re producing. We take a lot of pride in that and we want to make sure that’s right. The best way to ensure the quality is to be there in the factory and make sure.

L+T: How has Schott NYC remained successful for 100 years?
JS: I think because our products were built for a function and built for a purpose they just seem to not go out of style. We’re not creating trendy products or following trends. We’re building product the way we built it to be ridden on motorcycles or in airplanes. We built this functional product to last. That’s why it doesn’t go out of style, because it’s not a trend. 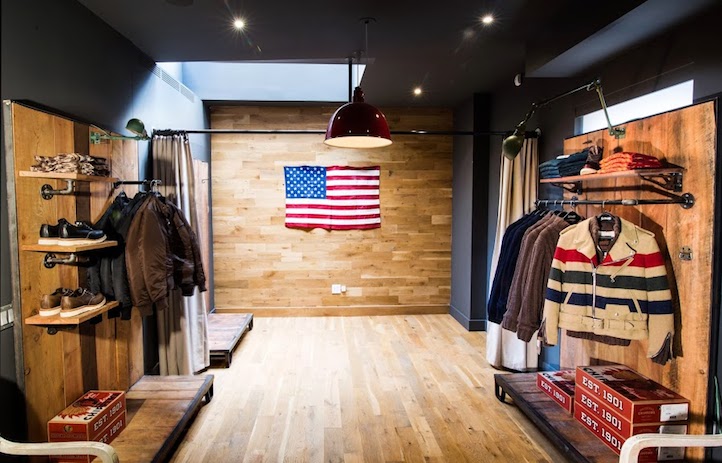 L+T: Why do you think the Perfecto motorcycle jacket is such an icon? Why has it continued to be a staple in Pop culture?
JS: I think that there is a certain simplicity to it. There’s this unmistakable imagery you get from seeing the jacket. I’ve seen people put on the jacket and all of a sudden it transforms them into a badass. They automatically feel like a tough guy or something. That seems to never go out of style. For generations after generations of badasses that’s the iconic go-to piece.

L+T: The bomber jacket is really popular right now. What is it about that jacket that seems to have resonated with people?
JS: I think that streetwear has always appreciated authenticity. The flight jacket stems from work. It’s workwear. I think the original appreciation is a lot of these jackets have come from a function, whether it’s motorcycle riding or flight jackets for the police. I think that all of these brands that have lasted for so many years have lasted, because they built product for a particular purpose. With the flight or bomber jackets there’s quality. There’s a rugged aspect that ties to kids right now. I think it’s just that authenticity that people are taping into. 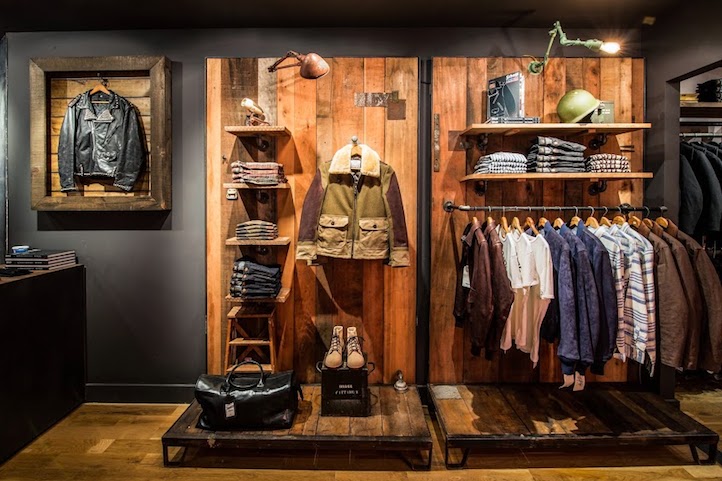 L+T: How has Schott NYC managed to consistently push forward and remain relevant without trying to replicate past successes?
JS: We walk that fine line. We always talk about how our past is our future. There’s this element where we are constantly looking back in our archives and looking to see what my grandfather or my great-grandfather came up with. We try to figure out how to recreate some of those things. We always want to keep a line to the history in what we do, but at the same time we got to continue to reinvent and keep things fresh and so we’re always coming up with new twists to old ideas. One of the things that keeps the brand singular or keeps the continuity of the brand is the fact that there’s Schott family members who have been in the factory the whole time making sure that we’re manufacturing to the right quality. We’re working on the same machines that my great-grandfather used, so there’s a handwriting to the jackets that we’re producing. It’s just finding that line between continuity of the brand and keeping that DNA, but also constantly coming up with something that’s new and fresh.

L+T: Do you think brands like Stussy and A Bathing Ape wanting to collaborate with Schott NYC is a testament to the timelessness of the brand?
JS: It’s certainly an honor to have so many brands that want to collaborate with us. Of course, we feel great that we’re considered interesting to these trendy fashion brands, but our focus is always on how do we continue to remain strong. We want people to want us even after some of these trends go bye-bye [laughs]. We plan to still be around.

L+T: Even though Schott NYC initially set out to create quality, functional workwear, it soon became known for style as much as it was known for quality. Was that ever a problem for your great-grandfather or your great-uncle?
JS: No. They were thrilled to be wanted. They were not in a position to turn away anybody that was interested in buying a jacket. It wasn’t until much, much later that we started to really appreciate Schott as a brand as oppose to just Schott as the factory. At that point is where we started to pay respect back to the brand, but for a long time it was just about running a factory. Nobody sets out to create a 100-year old company, and so they weren’t focusing on the future in terms of saving stuff. I wish they had, but they were trying to run a business, keep a factory going and sell product. I think they were as surprised as anybody that there was a fashion market to what they did, but they embraced it.

L+T: So there was never a fear of being too stylish or possibly even selling out?
JS: I was listening to an interview with Metallica where they talked about how people have been complaining about them selling out for twenty-five years. For us, it’s the same thing. Some people feel like because there is a fashion component that we’ve sold out, but we’ve just focused on building the right product the right way. We are not chasing trends, but at the same time it’s okay if we happen to hit them. It’s okay if they embrace us as well. We aren’t elitist or anything. We’re just focused on building quality product and putting them out into the world. Whatever happens from there happens. 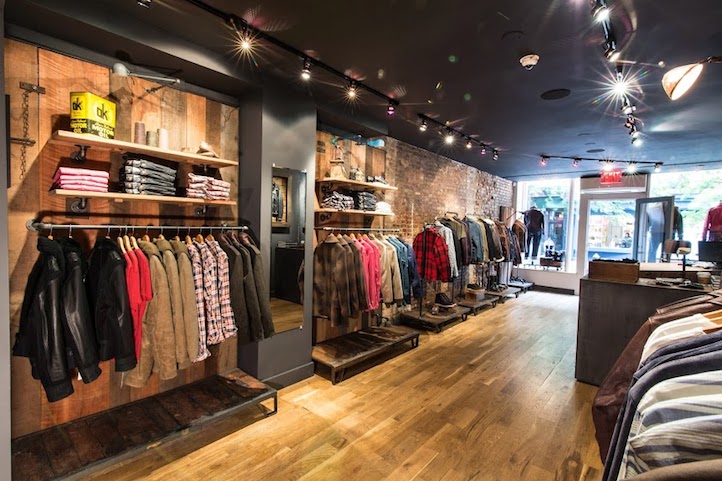 L+T: Schott NYC has had such an impact on American fashion. Do you think the brand gets the recognition it deserves?
JS: I think so. Schott’s asymmetrical motorcycle jacket is the Perfecto. Some people call this style of jacket a Perfecto, but it is only a Perfecto if it is made by Schott. We always have to remind people that it’s a trademarked name. We own it. It’s like Kleenex for tissue of Xerox for a photocopy, so it is there. Maybe it’s more so in Europe and Japan, but there are absolutely circles here that make that connection. Ralph Lauren came in recently to buy a motorcycle jacket. He’s Ralph Lauren. He doesn’t have to come in here, but he wanted an authentic motorcycle jacket and decided to come in here to get it. I think people who know the history, know what it is. I believe we get the respect we deserve, but of course, it’s our job to make sure more people know.

L+T: In your opinion, how would your great-grandfather and great-uncle want Schott NYC to be remembered?
JS: We’re rugged, Americana. I think there’s a quality component, but really it’s all facets of rugged, outdoor, Americana that’s translated in clothing. That’s who we are. It’s more than just a factory. It’s more than just the motorcycle jacket. There’s just this feeling of Americana that translates into the clothing. That’s how they’d want us remembered.