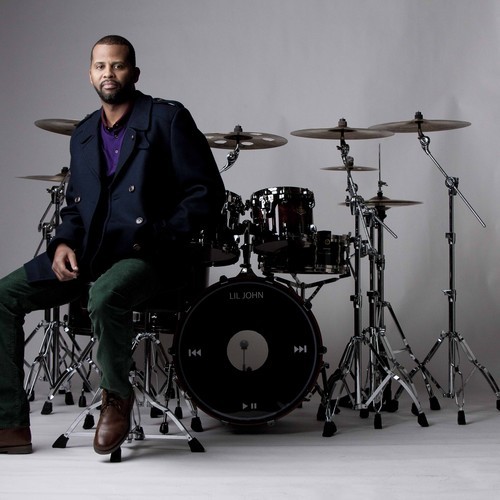 Lil John Roberts has been a top drummer in music for over two decades, recording, playing and working with a who’s who of artists – from Janet Jackson to George Duke – and on many of television’s biggest shows, including The MTV Awards, The Billboard Awards, American Idol and Saturday Night Live.

If you know where he’s from, his soul, funk, hip-hop and jazz musical chops come as no surprise. “Most drummers that come out of Philly are dope, I’m just gonna say it,” he says. “[It’s] just something in the water. Philly just has a certain vibe that doesn’t change. When you hear a Philly musician or a Philly rapper, you get it. It is what it is. That soul music from the ’70s and before that, it just stuck. Gamble and Huff, Grover Washington, all of that, we studied that stuff hard. It was just like a Bible that you had to read. Before you moved on to do something of your own, you had to know the foundation of it.”

Often a collaborator or supporting artist, seldom has he been able to musically express his own vision. His debut record, The Hearbeat (out June 3), has finally afforded him the opportunity, working with many of the cats he’s played and grown up with along the way – Stokley Williams, Musiq Soulchild, Chris Dave, Robert Glasper – to make a strong album plentiful on styles. Here, Life+Times chats with the busy drummer about the creative process behind The Heartbeat.

Life+Times: You worked with a number of different artists on the album, and you’re pretty busy yourself doing tours, recording for television, etc. What was the recording process like for The Heartbeat?
Lil John Roberts: Well, I was actually on the road with Ne-Yo when I started recording the record. It was kind of hard for me because when you go to work on a record, you want to put all of your time into it, and I didn’t have all of my time to be able to do that. So, what I had to do was go piece by piece, from touring to coming home and recording, then going back on the road, sending files to the people that didn’t live in Atlanta where I live. Some of it was cool because I just used a lot of the [musicians] I play with here in Atlanta and I’ve been working with them for years. Musiq is here and Chantae Cann, so the song with the two of them, “It’s Your Time,” we had a chance to record that together. But the other stuff, like with Eric Roberson, Stokley Williams, Anthony David, was really vibed out via emails. A majority of the band stuff was done here in Atlanta; the song “Space” with my boy Chris Dave – a great friend of mine since we were young, he played drums with me on that – and Pino Palladino who plays bass on that, they were in town with D’Angelo and they had a day off. Usually when they come in town, we go hang out or play at a club or something, but that night I told them, “Why don’t we just go in the studio and try and cut some stuff. I’m trying to start working on my record, so maybe we can use that as part of it.” So we went in for a good four hours – that’s all the time we had in the studio – and just started vibing. The first song we came up with was “Space”; really, that song top to bottom was one take, then I went back later and cut some things up. A lot of this stuff came together just because of the relationships that I have with a lot of these guys and we’ve been friends for so long.

L+T: This is your debut album, but you’ve been putting in work for a long time. How long have you wanted to do a solo record, and why was now the best time to do it?
LJR: This actually started February [2013]. 20 years in the game and I hadn’t done my own solo project, and all of my friends were just like, “John, you need to put something out that represents what you do and not what you’ve done for everybody else.” I’ve played on so many other people’s records and been on tour with a lot of them, but I’d never done anything outside of a band in Atlanta that was pretty legendary, I might say, called The Chronicle. Everybody knew about that band, we used to play every Thursday night at a place called the Yin Yang Café which broke a lot of artists that came out of Atlanta, [like] India Arie, Anthony David. We used to be the house band there and recorded a record in ’98 with Jermaine Dupri. That was the only record I had out that was a representation of me and my crew. So when somebody told me last year, “John, you ain’t getting any younger,” – I’m 42 now – I understood. That’s when I went ahead and jumped into the studio. From there everything kind of morphed into the next song and the next song. It really just took the year, but it would have been quicker if I hadn’t been on the road with Ne-Yo at the time.

L+T: You’ve played jazz, R&B, soul, funk, pop, hip-hop throughout your career and the artists you have featured on the album are equally diverse. Describe the sound that is Lil John Roberts and that you’ve crafted on The Heartbeat.
LJR: People know me for funk-jazz style, and that’s always been my thing for a long time. “That cat can play a lot of hip-hop, a lot of jazz fuse all those things together like a pot of jambalaya.” I like to do so many different styles of things that it’s really hard to put me in one box. When you hear the record, I have a rock song on there, a hip-hop song, an R&B-sounding joint, an instrumental song with George Duke. My style is all over the place, so to really break down the record into one genre, I would probably put it as a funk-jazz record but still with some elements of rock in there, too – “Grand Scheme” is like a straight Coldplay kind of song.

L+T: The lead single “Get Right” –  talk about that one.
LJR: Man, Sa-Roc. Oh my god, bro! She’s a freaking beast, man. Sol Messiah has been a friend of mine since I moved to Atlanta in ’94 and reached out to me, like, “John, I hear you’re working on your record, you should holler at my girl Sa-Roc, try to get her on something.” I just happened to go in the studio one day and me and the guys were just tracking some ideas like we had been doing, and one of the songs was “Get Right.” It was a hip-hop vibe, it didn’t have a whole lot to it. I was like, “Alright, let me go ahead and see what she’ll do on this.” She wrote that joint overnight, came in the studio the next day and smashed it, man. She wrote that in one night, she is something else. Her lyrics are so conscious, what she’s talking about is not selling yourself out to make money or for fame, it’s really for the love of what we do. That’s what she was spitting on that song, “Get right or get left.”

L+T: One of my favorite songs is the “It’s Your Time Interlude” with Robert Glasper.
LJR: Oh yeah man, that was a one take situation too. Robert was in town, he had a day off, we’re just hanging out, we all go eat somewhere – there’s a famous place I like to go to called Flying Biscuit, he had never had the food there, so he was just losing his mind. He was like, “What should we do?” I was like, “Man, you wanna go to the studio and track some stuff?” And the studio just happened to be down the street from where we ate; we went straight there and just started vibing. He was like, “Let’s create an interlude for ‘It’s Your Time,’” because he’d already heard that one. We went in, tracked it straight down from the top to the bottom, and then left it alone. I went back and pieced some things together, then Muhsinah was in town, she came in and started coming up with the harmony parts she did on the end. I added some Cuban drummers. Once I finished all of that, I was like, “Man, I’d love for some strings to be on here,” so I reached out to Michael League and Snarky Puppy and sent it to them. He said, “I got it, I’m gonna put the orchestra on top of this and send it back to you.” That’s how the strings and everything came together on that.

L+T: It seems like there’s six degrees of separation between people like yourself, Chris Dave, Robert Glasper and others that have a similar approach to the music. Everybody seems to know everybody.
LJR: Yeah, it’s a family of us and we’ve known each other for a long time. Glasper, Chris, Derrick Hodge – [me and him] basically grew up together in Philly. I knew him when he was just a little dude. Me and Chris met when we were 15 in the church days. We really met and got tight when we were on stage together, and he was playing with Mint Condition, I was playing with Monica, probably around ’93-’94. A lot of us have just been in each other’s circles for so long. I’m from Philly, so that crew – Questlove, James Poyser, Black Thought – me and James Poyser grew up in church together, me and Ahmir [Questlove] used to play in all-city jazz band together, him and Black Thought went to CAPA [Philadelphia High School For the Creative and Performing Arts] together, so all of us were around each other for a long time. The Roots took off, I left Philly and went to Berklee [School of Music], then everybody heard I was out [playing] with Janet Jackson at 23. We all ventured off into our careers, but still were family. Bilal, Jill Scott, Musiq, Kindred The Family Soul, Jazzy Jeff and Will Smith I used to work with a lot, Dre and Vidal, it’s a crew of us, man. There’s a lot of history there, especially in Philly.

The Heartbeat is available here.