Music fans have had plenty of opportunities to hear Derrick Hodge‘s bass in recent years as he’s collaborated with everyone from Maxwell to Common to Robert Glasper. Only now, however, is Hodge getting a chance to speak directly to those listeners. After countless features and guest spots on others’ tours and albums, Hodge’s solo debut, Live Today (out August 6 on Blue Note Records), is a much-anticipated and well-conceived open book, as he invites audiences to take a glimpse into his life via music.

Life+Times caught up with Hodge to discuss Live Today, his previous work as a collaborator and more.

Life+Times: You’ve spent a lot of time working with other artists – Maxwell, Robert Glasper, etc – why was this the time for you to go ahead and make your solo record?
Derrick Hodge: Throughout the years, people have been really showing a lot of love, which I don’t take for granted. In every endeavor whether it was Robert and the Experiment or Maxwell or any other thing I’ve done, people would always ask me, “When are you going to do something on your own?”, and I’ve been kind of filing that away. I’m one of those guys that really gets focused on whatever project I’m working on to the point that I’ll put my own thing on the back-burner. Finally, it just me, like, “Let’s not wait for that golden moment, or for something to fall out of the sky; let’s just go on a leap of faith.” That’s what I did. We literally just hit the studio and started creating music basically on the leap of faith that everything would work out and that’s exactly what happened. All the stars aligned and everything just worked out in a way where here we are. It was more of a decision to finally just make today the day, hence the concept of the album, Live Today.

L+T: How was making Live Today different than making other albums where you’re more of a collaborator? Were there certain things you wanted to accomplish because this was your album?
DH: For me, it started with the [question], “Ok, what is it that I want people to know about myself?” They’ve already heard me document in a lot of other situations and I figured the best way to start my career as a solo artist is to give people something very raw, very honest from myself – give them a snapshot of how I’m feeling at any given moment in time. I wanted to make sure the album and the process fell in line. I’m a producer and writer by nature so I have a tendency to really think things all the way through to try to give a good sounding finished product, but sometimes you have to be willing to just expose yourself and give people how you’re feeling in a very raw way, for better or for worse. I think in this time people need that. They’re so used to hearing a polished product, so I figured let me actually go away from that. Let me write everything in a very short amount of time, hit the studio and no matter what, each song I wanted to have raw elements of something I created just right there in the moment. I kind of turned the producer’s hat off for this. I really try to over-produce or overanalyze or prove a point with solos, I just wanted to give people something very honest to my core. I think people deserve to hear that from me as an artist. That’s the biggest difference putting your own thing out, you’re really an open book at this point. People are supporting and buying into your concepts and what you have to say. It just came down to a decision: “how honest do I want to be with that?” 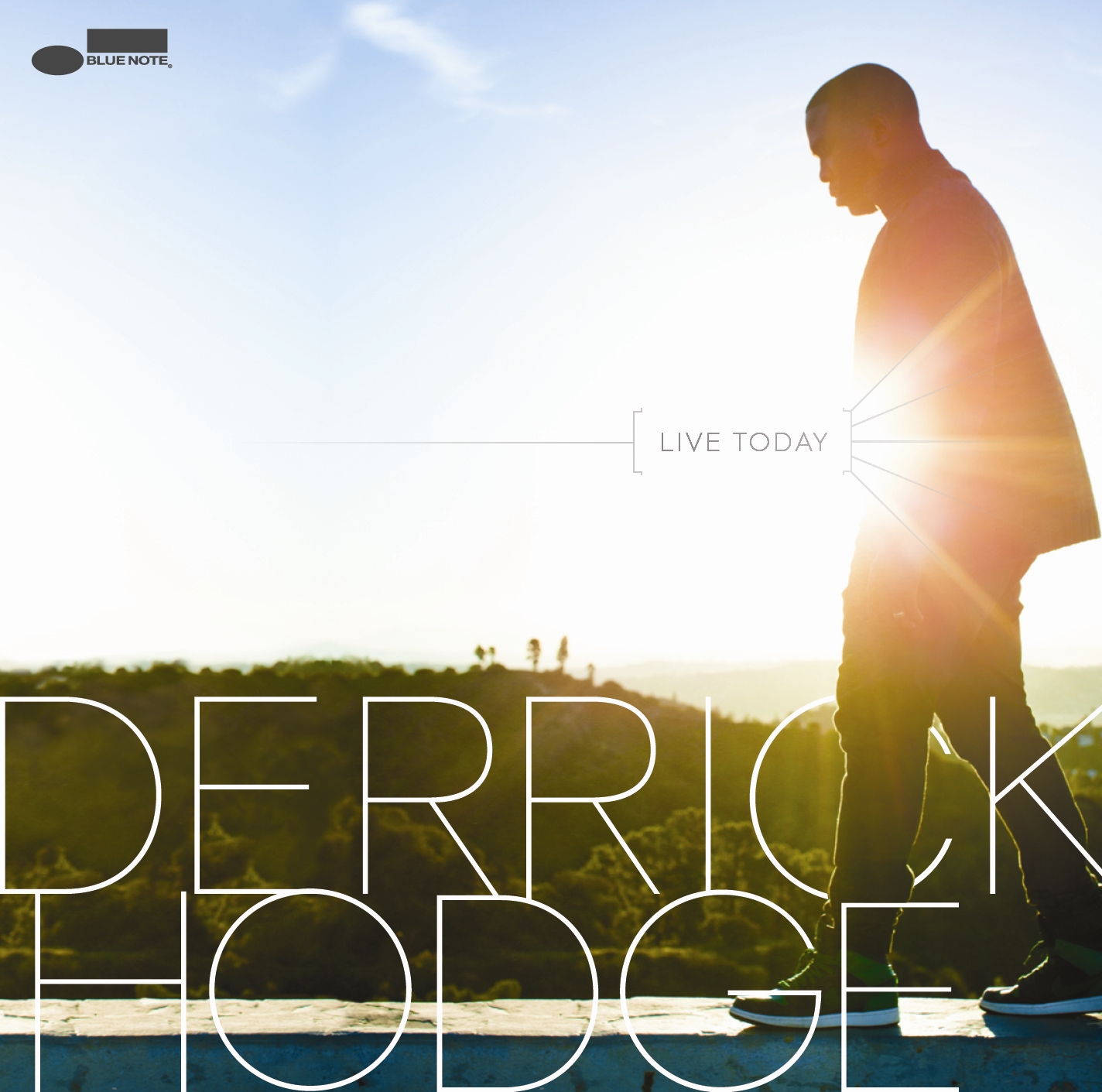 L+T: Talk about the album title, and the place the title track featuring Common has in the grand scheme of the album.
DH: It’s funny you ask that because the title Live Today basically just came from those thoughts. Trying to seize the moment, not worry about gimmicks, not worry about the timing of anything. Trusting that whatever I have to say, whatever I feel is good enough because it’s honest. I thought about it based on being in the moment – Live Today – and I explained that concept to Common when we played that song. What you hear on that song is just him in the moment responding to the concept I explained to him. I had to do whatever I could to have him on there, my respect for him as an artist – and the love and respect he’s shown me in return throughout my career as a bassist and a producer. I had to honor that. I figured if anybody would get the concept, it would be him, so I’m really glad that worked out the way it did.

L+T: Is there a track on the record that stands out to you in particular?
DH: Honestly, every song on that album has a very similar level of honesty and a personal resonance with me because they all came and were birthed out of very honest situations. “Boro March,” for example, has a mix of a marching band type vibe and influences that may not be “jazz” but a lot of that sound, a lot of the bass interludes like “Table Jawn”, that was my introduction to the music just sitting in the practice room working through ideas, letting it be. Some of those tracks on there were things that I played when I was 19. I wanted to give really raw things, then I brought it to the studio and just added drums or a couple elements hear and there, but they’re hearing very raw statements at various points in my life. So when I listen to the album it takes me on a journey of how I felt at a given time when I hear each song.

L+T: Between yourself, Robert Glasper, Chris Dave and others, you all seem to be at the core of this intersection between jazz, hip-hop and R&B. Do you feel that way as well, and what’s put you all in this position?
DH: Well I can only speak for myself but I know in talking with Robert, and Chris too, we feel very fortunate in being in positions where we can just be ourselves and whatever we put out there, I think, is something that we honestly meant to do. We feel very fortunate because throughout all the projects we’ve done, of anything someone may pick up, it was how we honestly felt, we weren’t trying to be something that we weren’t. The fact that the attention is coming now is definitely something that we don’t take for granted. The love and support people are showing we definitely don’t take for granted. It’s kind of crazy, in reality you just can’t get too caught up in that because at some point hype can get to your heard, so what we’ve been trying to do is just keep it very simple. Try to document anything we’re feeling and be honest to ourselves because in reality, there are a lot of talented people out there. We [hope] that while things are working for us, it will also pave the way for others. The way we’re doing it, we’re trying to support each other. My deal with Blue Note came as a result of Don Was coming to a [Robert Glasper] Experiment show and hearing my solo; I showed a lot of love and Robert showed a lot of love to me in the microphone. The deal came out of that, Don approached me after the gig and was like, “I’d like you to be part of the Blue Note family.” It came out of us really supporting each other first and foremost and wishing the best for each other. It’s definitely a movement.

L+T: What role did being in Philadelphia play in your growth as an artist?
DH: I think you’re really a product of your environment, let me first say that. I was very fortunate enough to come up in a very condensed hotbed of talent. I’m from Philly, but I actually grew up in Willingboro, New Jersey, which isn’t that far Philly. It was one of those suburban but very urban schools where everything was based around sports and the music program, and they let us do whatever we wanted to do, practice around the clock. That fostered a creative atmosphere and environment, and Philly being so close, there were a lot producers at the time – they hadn’t even blown up – that were just doing a lot of little clubs, letting the live music happen. I think that opportunity to hear live music done on a level like it was happening in Philly had a big impact on me. And the movements to come out of there later, with the James Poyser’s and the Ahmir’s, The Roots, that whole movement, I feel honored to be a part of that. That doesn’t just speak to what they’ve done personally, it also speaks to all the amazing music that was being fostered at the time out of the studios – Larry Gold’s studio – there was a lot of creative energy happening. I feel like I’m just a product of that.