It’s no secret that Jordan Brand’s continued reign in the basketball shoe market is largely driven by retros. Often overlooked are the current Jordans. They might not have the vintage look of the Jordan III’s or XI’s, or the star power of Kobe Bryant, Kevin Durant or LeBron James’ signature shoes, but from a performance standpoint, these newer J’s are some of the most innovative shoes on the market. Especially starting with the XX8 last season, Rob Bruce, Jordan Brand’s Global Innovation Design Director, has played a key role in pioneering MJ’s latest products.

“I was asked to come back and lead our innovation efforts for Brand Jordan,” says Bruce. “I was happier than anything to do that because it’s such an amazing brand and opportunity. It’s a brand of flight so we had to come up with something really unique and exciting and dynamic [to] get us back to that on-court supremacy when [Michael Jordan] used to play.”

What he came up with was Flight Plate technology. After debuting it on the XX8, a shoe that received high critical praise, this season it will be showcased in the XX8 SE and Super.Fly 2, specifically on the feet of two of the games most explosive, highlight-ready athletes; Russell Westbrook and Black Griffin.

“The XX8 SE is pretty much my first sketch,” Bruce continued. “It’s the XX8 without the shroud, the zipper and all that. We really wanted to take what was going on with [Nike] Fuse and make it ours with this Dynamic Fit as an upper. It’s super-playable, ready to go.”

Westbrook, along college athletes at Georgetown, North Carolina, Marquette and Cal Berkley will be in action in the XX8 SE. Three camouflage color ways hit stores October 11 and a fourth, Westbrook-inspired colorway will be available October 23. The Super.Fly 2 is available now.

Life+Times spoke with Bruce and Jordan Brand Global Communications Director, Brian Fachinni, about the XX8 SE, Flight Plate technology, and what the future holds for Jordan.

Life+Times: How rigorous was the testing and research process for the flight plate technology?
Rob Bruce: Different than anything I’ve ever designed. Footwork is a unique piece, because you’ve got the most amazing, talented, multi-millionaire franchise athletes that we have to protect and keep them healthy. So exhaustive testing is kind of the hallmark of what we do in Jordan innovation. It was really going into the Nike research lab and talking to the smart guys over there, the analysts, physiologists, etc. We kind of came up with this idea around plated Zoom and built a number of prototypes. The Air Jordan XX8 is the lightest game shoe we’ve ever built and it’s probably the most tested. That’s what’s so critical when it comes to athlete confidence. The shoe’s gotta work and it’s gotta work really well. It can’t just look great, it’s gotta work really well. That’s what kids expect, I think, but they don’t know what goes into that. That, to me, is the fun part of this job because I’m paid to fail. We ran 13 rounds of dynamic tests [on the Jordan XX8 and XX8 SE], which is more than almost any other Nike product, and certainly any other Jordan product, has been tested. I think the proof is in the pudding because what you have on the other end is a complete system that works. From the upper to the traction, this thing has been exhausted and works really well, and we’re getting great feedback from our athletes, especially Russell Westbrook and Blake Griffin. They’re saying, “Hey, this thing feels like it’s part of my body, I don’t feel any distraction. It’s make me feel faster and more explosive,” and that’s really what we want our athletes to be talking about. 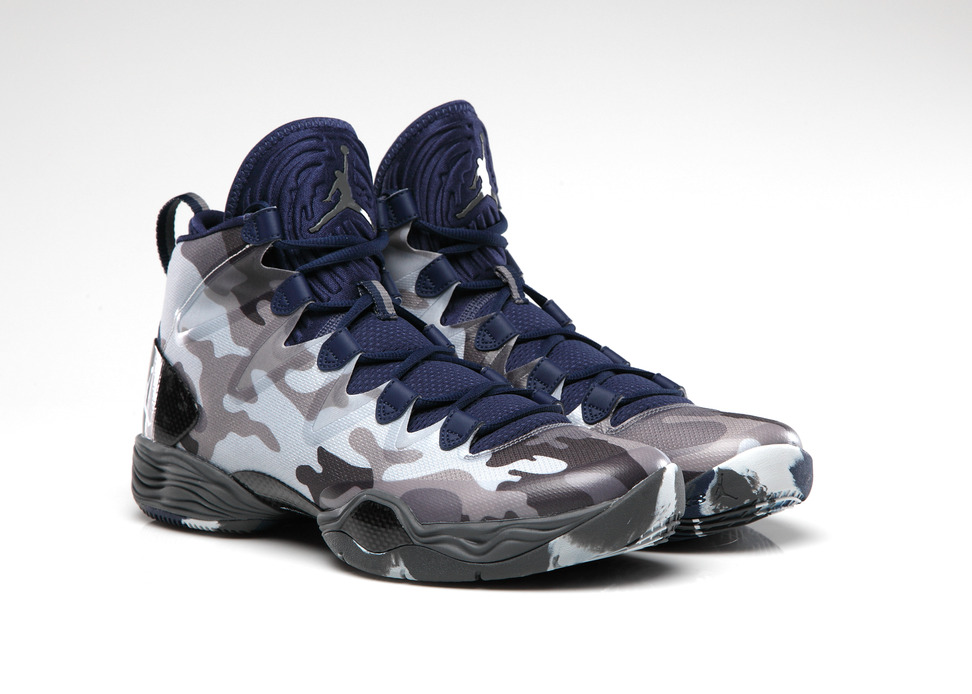 L+T: A lot of people said the XX8 was the best performing basketball shoe, especially last season. With the Flight Plate technology and the Jordan shoes coming out in the future, would you say these are the most advanced shoes on the market?
RB: Absolutely. I fully believe that. We’re probably the most understated. They said a lot of things about the XX8 because of the polarized design that Tinker [Hatfield] and I came up with with the eight-inch boot. Tinker’s gonna go out there and push the envelope. That’s what he does best. What’s really important from an innovation and performance side is that we followed through and met that same caliber of pushing the envelope. Although we didn’t make a lot of pairs of the XX8 – there’s not a lot of kids wearing them because it’s just limited – what we did make blew out. They were gone, vaporized in no time. That’s what you wanna do. You want to create demand and hype, but it can’t be fluff, it’s gotta actually work. You have to feel it, put it on, let it enwrap your foot and stand on that Zoom. What we’ve done here is really unique because the Zoom Air, which is an incredible technology that we’ve had forever is by far the chosen technology for all basketball players, for the most part. The problem is we make shoes where we embed the Zoom and it loses all of that energy and responsiveness by being encapsulated in foam, cemented, etc. I looked at that and said, “We can do better than that.” We realized that if we put a plate on top of it, coming from the Jordan XI, where Tinker put in a carbon plate and helped Mike with his plantar fasciitis – carbon product is just rich as a material, it’s used in auto parts and pieces all over the world – let’s carry on with that. Let’s plate the zoom and isolate it on your foot so that there’s no distraction, no foam in your way. I think we’ve changed the experience of air with this product. This is just the beginning, there’s a long road ahead of us. We’re making a lot of other products like the Super.Fly 2, Blake’s shoe – he loves that shoe. 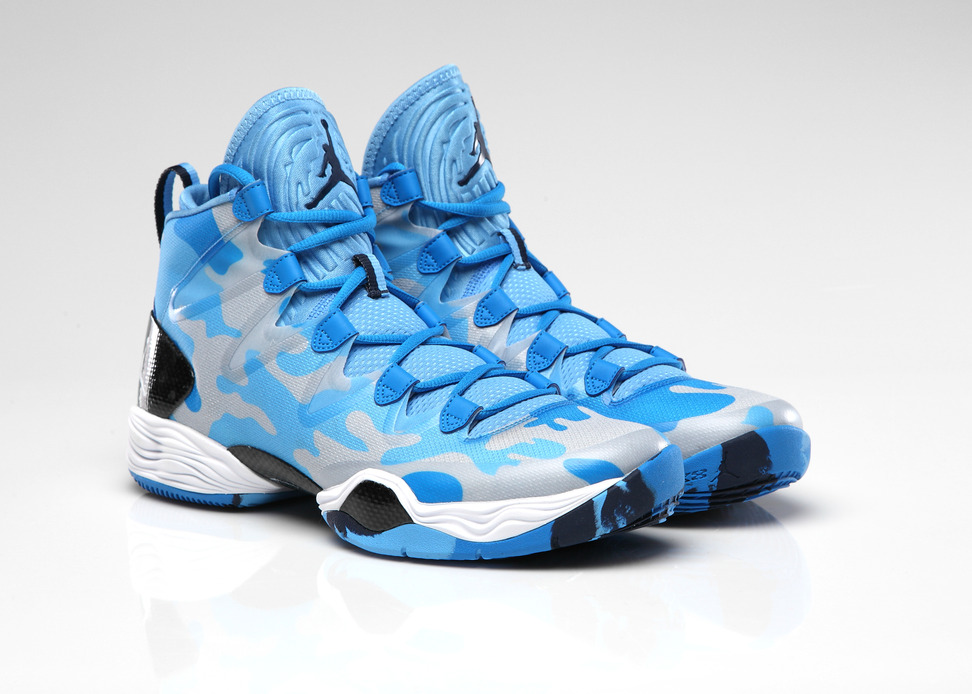 L+T: Is this technology going to be throughout all the Jordan signature shoes, including Chris Paul and Carmelo Anthony’s shoes?
RB: It’s on its way. That’s pretty significant for us as a brand because in the past 10 years, we’ve kind of jumped on something, then jumped off it. From a design purist, technology standpoint, Porsche doesn’t change their design every year. They evolve it because they’re striving toward perfection. That sort of methodology really resonates with me because we feel like once we get on something and it works for our athletes and tests in the lab, I want to make that better and more accessible to more kids globally; to make sure more kids are playing in them rather than just rocking them on the streets. This brand is really about performance. It we’re not dominating on court and having that supremacy like Mike when he was playing with our modern athletes, we want to set that up for the future and own that space. That’s why it’s so critical for us to have that discipline to strive to build the world’s best basketball shoes, period. I don’t want to mess with training shoes, kids shoes, etc. We’ve got to get this one right and I feel like we’re starting to really turn the corner. The 2012’s were really interesting, but this, I think, is a real significant turning point in the brand.

Brian Fachinni: The game has sort of changed a little bit. Us being a part of Nike, we benefit from seeing Nike Running and seeing what these other groups are doing. They started probably four or five years ago with their Lunar [technology], where they got on something and stayed and refined it. There was always this thing in basketball, whether it was Nike, Jordan, or any of our competitors., where it was introduce something, next year something new. This [flight plate technology] is the first foray, this is just the start for us. It was on the XX8, it’s crazy and makes Zoom better, and it came on this crazy shoe. Most guys were like, “No way,” but we’re luck enough that we have Russell Westbrook. On top of being crazy explosive, he’s a little out there in his fashion, too.