Beyond the neon glow of the Las Vegas strip lies a city that has a burgeoning culture that strays from the customary slot machines and card games that Sin City is best known for. Imagine, if you will, a nightclub/sports bar where you can bring your friends for an evening of drinks and fun. But instead of sweaty bodies crowding a dance floor, you grab a VIP table with a hot waitress that caters to your every need. Oh wait, rather than just sit there and look all pretentious with your bottle service, you can fire up a game of Madden or NBA 2K on the large screen HDTV at your table. Not cool enough for bottle service? That’s okay, you can waltz over to arcade cabinets with your drink in hand and go toe-to-toe with a foxy lady in a game of Mortal Kombat (or Ms. Pac Man if you’re old school).

We know, that’s only the stuff that dreams are made of. Right? Wrong. You see, this dream actually exists on 512 Fremont Street in Downtown Las Vegas and is the brainchild of Brooklyn native and Rutgers graduate Christopher LaPorte called InsertCoin(s).

InsertCoins(s) is an 80’s baby’s wet dream. With 60 refurbished arcade cabinets, 40 game consoles on 44 large HDTVs, a stacked bar with drinks named after video game classics (“Punch Out” and  “All Madden”) and a live DJ playing golden era hip-hop, InsertCoin(s) will likely bring a tear to the eye of anyone who has fond memories of squishing Koopa Troopers in Super Mario Bros. with Big Daddy Kane’s “Ain’t No Half Steppin” playing in the background.

It would take a Brooklyn kid to concoct such a clever idea.

“I was in a totally different world,” Laporte says about his previous career in the healthcare industry as a medical device sales representative before relocating to Las Vegas in the early 2000s. “I would have to take clients out to dinner, golfing and things like that. I was always a video gamer but most of the clients I had weren’t. We’d go to a sports bar and I’d think to myself that this is fucking boring.”

Once he settled in Vegas, LaPorte began to frequent a yearly video game tournament called The Evolution Championship Series (or “Evo”) and took notice that the participants of this growing tourney were predominantly over the age of 21. Being a gamer himself, LaPorte began to visualize a place where people like him could go and have a good time. A place where video games and the nightclub scene intertwine. A place where grown men and women can indulge in libations, listen to good music and whoop some ass in Street Fighter II. A place that felt like home.

“There’s a group of people who are old enough to drink and like video games. If you put two and two together it’s a market that is bigger than anything else,” LaPorte explains. Upon further research, he’s right. From 2004 to 2011, the video game industry has gone from a $10.3 billion industry to a whopping $65 billion monster despite a struggling economy. Meanwhile, alcoholic beverage purchases have continued to prove to be somewhat recession proof.

Even though it made perfect sense to marry the two worlds, investors scoffed at the idea of a Videolounge Gamebar.

“Everyone would say nobody would come,” the Brooklynite says about potential investors that initially shot down the idea. “(They said) ‘it’s for losers’ and that stereotype is still out there,” To combat the claims that a Videolounge Gamebar was a flawed idea, Laporte created a Facebook page advertising the concept just to show potential investors that people were interested. The “Likes” came in droves and caught the eye of two surgeons who spotted the unique upside of the establishment. Two years of collecting arcade cabinets ranging from old school classics (1978’s Space Invaders) to newer titles (2000’s Marvel vs. Capcom 2) and gathering Atari 2600s, Sega Genesis consoles, Nintendos, ColecoVisions, Super Nintendos, PS3s and Xbox 360s culminated in the opening of the 7,000-square-foot bar in April 2011. 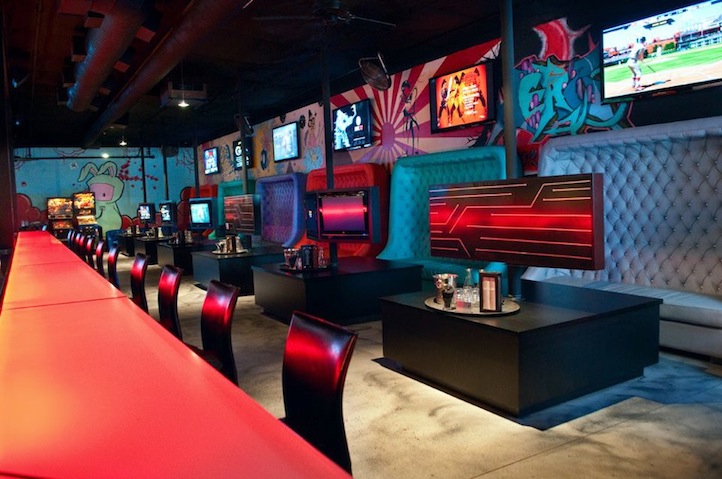 “My fear was that we were going to be typecast as this gamer spot that is only for gamers,” LaPorte says. “It was important that this was going to be something for everyone. I wanted to have people in their 40s come and play asteroids like they were kids and people that just turned 21 him to just play Xbox.”

But the grand opening and subsequent months have seen everyone from your daily gamer to professional athletes and reality TV stars fall through to hang out. And that funk of 80’s and 90’s hip-hop that permeates from the walls is a byproduct of LaPorte’s New York upbringing.

“Being from Brooklyn, when you say downtown you are talking about cultural center and a true urban environment,” LaPorte explains about the overall vibe and the performances by the likes of De La Soul, Talib Kweli and Brand Nubian that have taken place over the past year. “It’s going to have a hip-hop feel and an indie culture vibe to it. The ’80s and ’90s were the golden age of everything video games and hip-hop. It was bringing in East coast culture to Vegas in terms of open-mindedness.”

For LaPorte, it all started with a dream and the notion of bringing something totally unique to a city that is known for its glitzy nightclubs and endless stream of poker tables and roulette. “In New York you knew all of your neighbors and there was a sense of community. Vegas is missing that and InsertCoin(s) makes me feel like I’m back home.”