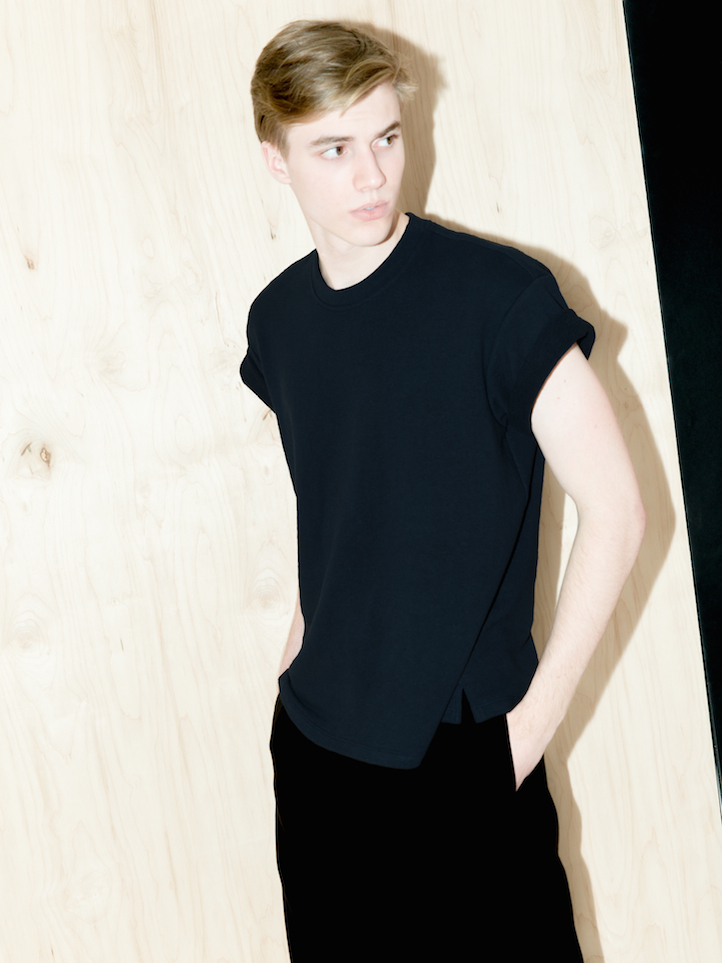 The concept of less is more has seemingly taken much of the fashion industry by storm. In lieu of relying on big logos or eye-catching embroideries to sell their clothing, many designers have redirected their attention to fits and fabrics, opting for a more subtle approach to their designs. This current obsession with subtlety – which has been synonymous with brands like A.P.C. and The Gap for years now – has even inspired a new trend, dubbed “normcore.” One of the new kids on the less is more block is Fanmail, a brand where unmistakably uncomplicated designs and its use of environmentally-friendly materials and techniques are central to its identity. The clothing line launched in June of last year and has already caught the eye of Drake. The multiplatinum-rapper wore custom Fanmail pieces while on the European leg of his “Would You Like A Tour?” outing. Here, Fanmail’s owner and designer, Charlie Morris talks to Life+Times about designing for Drake, being inspired by TLC and wanting to make the perfect T-shirt.

Life + Times: How did you end up designing for Drake?
Charlie Morris: It’s still pretty nuts that it happened. His stylist saw the A/W ’14 lookbook and apparently the cotton-hemp denim jacket and pants looked like a refined version of a really street, ’90s hip-hop outfit she’d seen on eBay. She commissioned a custom suit for Drake’s concert during Paris Fashion Week. When I saw pictures from that show where Rihanna came onstage and sang “Take Care” with him I kind of freaked out.

L+T: What’s the meaning behind the name Fanmail?
CM: I was actually listening to the TLC album of the same name a lot when I began work on the first collection. I could say that the album’s messages of connectedness, communication in a digital age and honesty are important to the label – and they are, sure – but the reality is that Left Eye repeating “Fanmail” over and over in the title track got stuck in my head.

L+T: Why did you want to launch a label that’s based on using organic materials and environmentally-friendly techniques?
CM: Restaurants list their suppliers on their menus and customers are paying more attention to where the things they buy come from and how they are made. Why shouldn’t that also be applicable to clothing? If I think about the Fanmail care label almost like it’s a nutrition label, wouldn’t I want to use the best and safest ingredients? 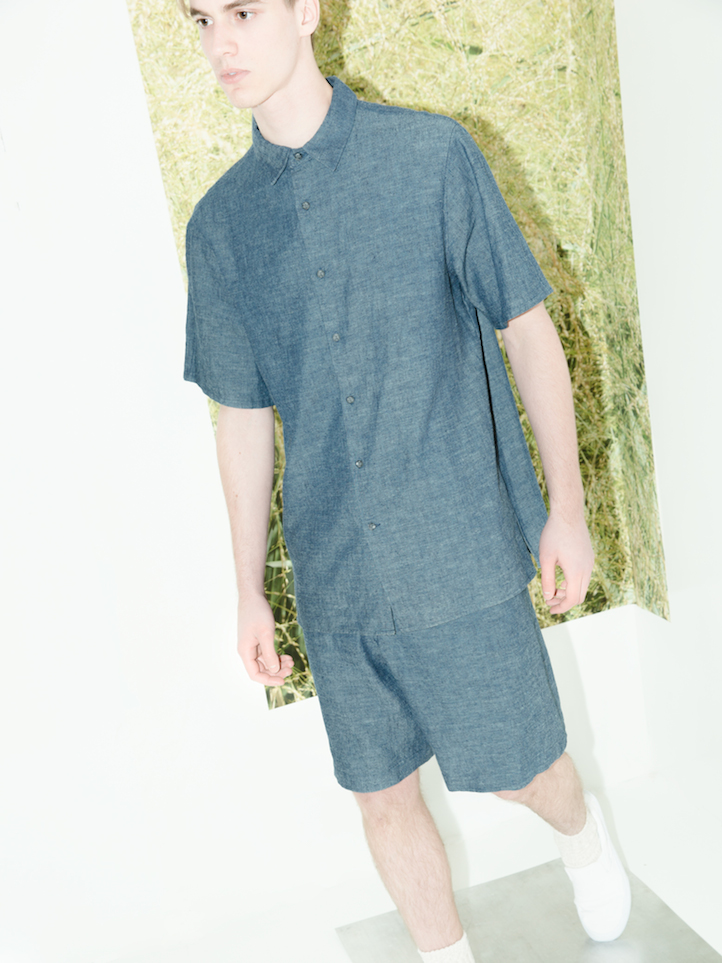 L+T: Could you explain your Transparency From Fiber to Finished Garment concept?
CM: The idea is really about opening up the production process to the customer, sharing with them where their clothes come from and what those clothes are made of. Being open about our fabric suppliers, dye houses, and cut and sew factory allows the customer to better understand what makes our brand sustainable.

L+T: Fanmail has just introduced a line of shorts, button-downs and jackets, but it began with just T-shirts. Why did you want to launch your clothing line with just T-shirts?
CM: The T-shirt is the core of most guys’ wardrobes. There are organic, American-made tees out there, but they are at two extremes. Either you get the mass-produced tee with an “I’m An Organic T-shirt” silkscreen on it or you get a super-specific luxury T-shirt that you have to treat really carefully. I’m not one to wear my politics on my chest and honestly, I might wear a T-shirt more than once before washing. When looking for something to wear I’m just as likely to find it on the floor as in the closet. From a selfish perspective, I wanted Fanmail to start with T-shirts that were actually designed with someone like me in mind. I also knew there was a customer out there willing to pay a bit more for a high-quality, Made in USA T-shirt that was sustainable and luxuriously soft. Basically I wanted Fanmail to make a perfect tee that you don’t have to treat preciously. 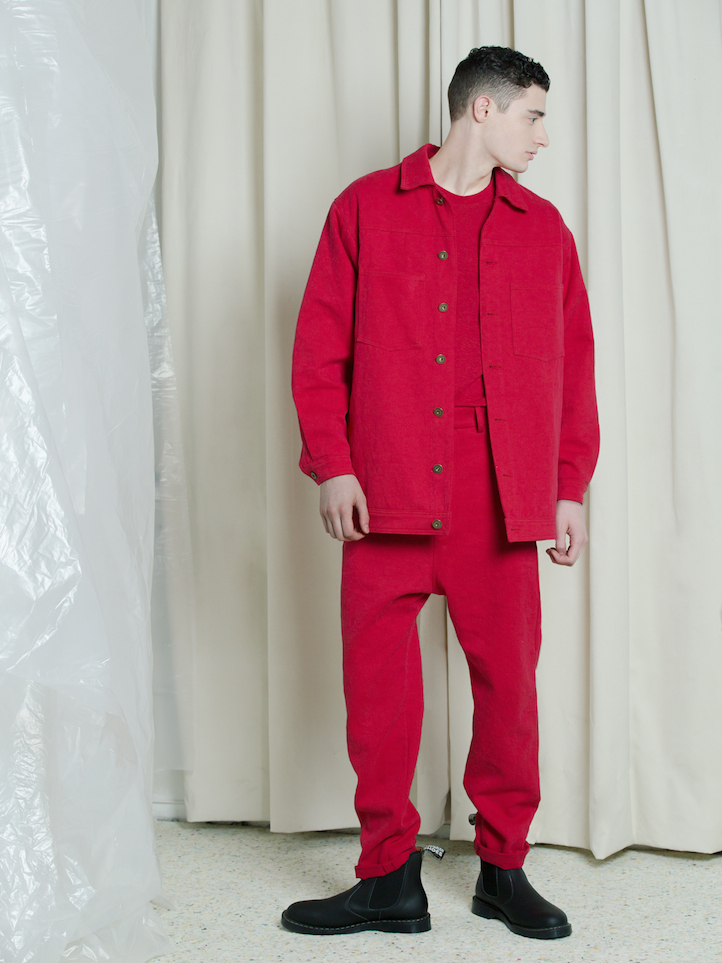 L+T: The appreciation of the minimalist aesthetic, which some have coined “nomcore” is really popular at the moment. What is it about minimal or understated designs that appeals to you?
CM: I don’t know that Fanmail is exactly normcore. I think normcore is more about dressing contextually than a specific style of design. I’m into the normcore idea, in the sense that freedom doesn’t come from dressing to either stand out or to blend in. Have you ever seen a friend wear something that they’ve looked cool in, but on the third or fourth time you see them in it you finally get why it’s so cool? Why it drew you in? I guess that has started to appeal to me more, not the figuring out an item of clothing part, but the paying attention to garments that become more interesting over time because of subtle differences part. But don’t get me wrong, I do still have my own archive of acid green neoprene vintage Comme des Garçons clam diggers.

L+T: With the focus not on flashy or edgy designs, how will Fanmail separate itself from not only other brands that specialize in minimalist designs, but also other brands in general?
CM: I think people seem to get what Fanmail is about as soon as they touch or try on our clothes. We source some really unique fabrics, so keeping our designs uncomplicated brings the focus to texture and tailoring. Fanmail may be a line of fairly straightforward wardrobe essentials, but we don’t want to be mistaken as just another basics line. Our cotton-hemp denim jacket for A/W ’14 is sized up to look more like a barn jacket. We’ve lined it fully with organic cotton flannel, so it can be a three-season jacket depending on how you wear or layer it. Maybe we’re focused on small details that don’t stand out on the runway, but we prefer to make clothes for guys who appreciate how Fanmail’s style and functionality fit into their own closets.