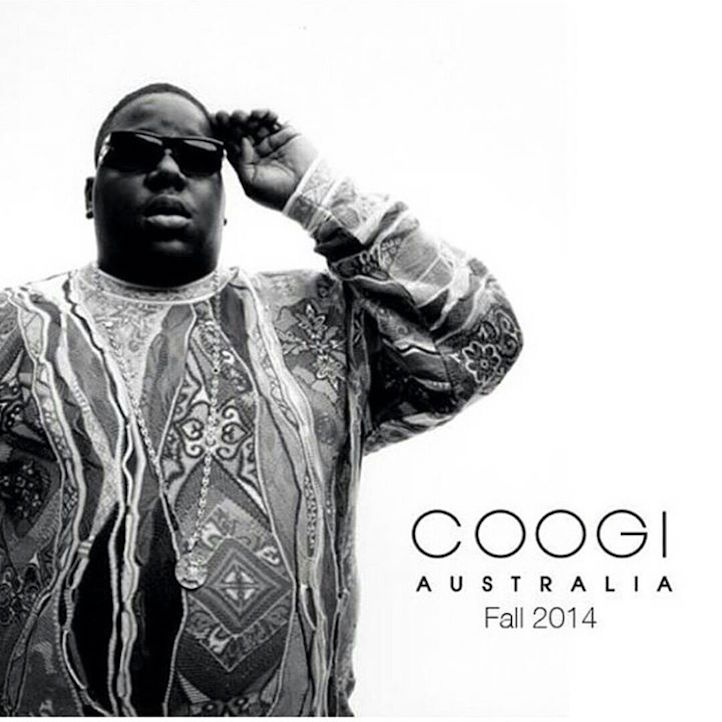 Don’t be surprised if the hashtag #CoogiBack starts popping up all throughout your Twitter feed and Instagram timeline over the next few months. Coogi, the Australian brand founded in the late ’60s that reached its pinnacle in the early ’90s, due in part, to a not-so-subtle cosign from one of the greatest rappers of all time, The Notorious B.I.G., is preparing for a comeback of sorts. Understanding that time is of the essence, the Coogi brand anticipates to capitalize off of the recent resurgence in interest in the colorful knitwear it has long been synonymous with. Along with the assistance of clothing boutique, KITH – who has been announced as the exclusive retail destination for Coogi’s upcoming menswear collection – and fashion label, Rag & Bone – who collaborated with Coogi on a collection consisting of women’s sweaters and skirts – the clothing line with its storied history is ready to embark on its next chapter. “This version, this iteration of Coogi will be designed to sort of stand the test of time, to stick around for a longer period of time and to have an aesthetic that’s sort of going to cater to luxury brands,” says Coogi’s Creative Director, Willie Esco Montanez. “We want to be sitting with Burberry and Missoni and Gucci, and we have game plans set aside for us to accomplish that.”

Here’s a conversation with Coogi’s Willie Esco Montanez, where he discusses why he teamed with KITH and Rag & Bone to reintroduce the brand, why he feels the brand lost its footing in the late 2000s and why Notorious B.I.G.’s support of the brand will forever be their biggest endorsement.

Life + Times: How did the partnership with KITH come into play?
Willie Esco Montanez: The KITH collaboration sort of evolved over a period of time. I’m also Creative Director for the Etonic sneaker brand. I initially met with KITH regarding Etonic. From there I let Ronnie Fieg know my plans for Coogi and how I had liked to reintroduce the brand. My reason for that was that it would probably come off the heels of re-launching the brand on the women’s side of things with Rag & Bone. It was being launched to all of Rag & Bone’s high profile accounts like Bergdorf Goodman, Nordstrom, Neiman Marcus and Barneys. Part of the Coogi’s DNA and aesthetic was that it was a huge menswear brand. We felt that working with KITH was a great compliment to how Coogi’s women’s line was launched in August with Rag & Bone. We understood that KITH was going to do a big part of the heavy lifting for reintroducing the brand as a luxury brand, but that they also understood that Coogi’s street credibility is so enormous that it can’t be ignored – not even at the luxury brand status. And also, KITH is really like a pinnacle street wear boutique and sort of represents what Coogi would be all about in the 21st century.

L+T: Were you surprised that Rag & Bone wanted to revisit the iconic Coogi sweater for their Fall 2014 collection?
WEM: I wasn’t too surprised. I really didn’t know what collaboration would come first and who would come to bat with me on the re-launch of the Coogi though. The buzz started organically via social media with people posting their vintage Coogi pieces. I think both Rag & Bone and ourselves identified that as a great opportunity and as instant credibility with a brand that still had legs. When we came together it was an understanding that Coogi is still iconic. We said: “Let’s work together and put our best foot forward.” Rag & Bone did a spectacular job, because they reintroduced it in a very simple way from a women’s perspective and brought down the colorfulness of the knits to sort of fit their brand, which allowed us to counter that with reintroducing the men’s side with the traditional colorful side of the knits through KITH and Ronnie Fieg. It was a perfect balance to me. You just have to let those types of things happen organically in order for them to work correctly.

L+T: Every brand has a, “Wow, we’ve arrived!” moment. So far, during this new chapter for Coogi, what do you think has been that moment?
WEM: Well, I knew the moment was going to come just from knowing that the social media barometer was through the roof and that you could see a lot of hashtags on Coogi happening. It was anticipated. But the moment officially came when I saw Coogi on the runway with Rag & Bone. Back in the day, you had to normally wait a few months to see stuff back in print, but this went viral within seconds. We got instant gratification from seeing it covered by Vogue and some other high end reviewers that gave us ultimate praise. Even the bloggers in the street wear market were surprised to see it. No one saw that coming, so that moment when you click on that link and you see Vogue or GQ cover the product and give it rave reviews you know that you have done the biggest part in reintroducing the brand visually and aesthetically and it lets people know that we have a game plan. 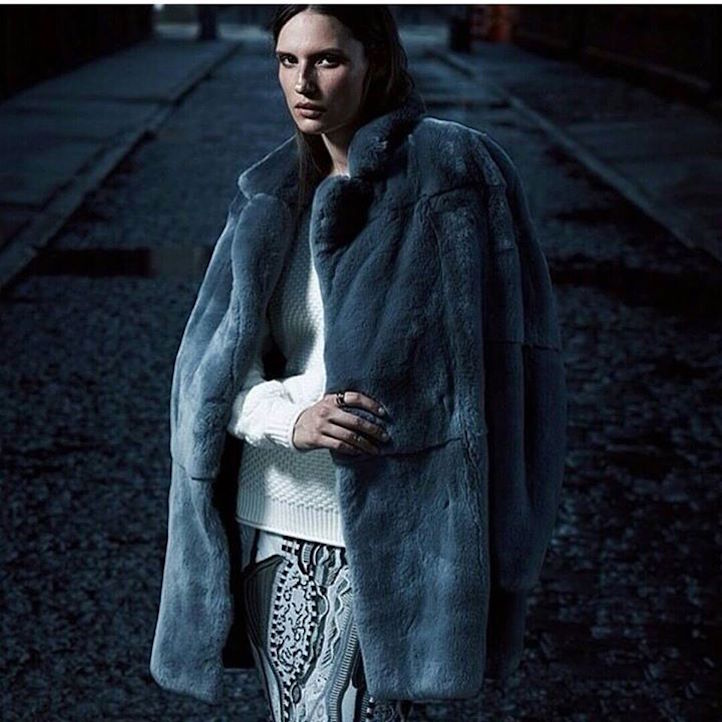 L+T: In your opinion, why did Coogi lose its lure in the late 2000s?
WEM: Initially, the game plan was always to stay luxury. Unfortunately, it sort of lost its way in the later years through 2006 through 2011. It still generated income, but it just was not viewed as a luxury brand. It was a situation where you have consumers who have a heavy appetite at a price point and where you sort of compromise the brand’s integrity, because of status quo and what’s happening in the marketplace. Now the challenge would be gradually introducing some cut-and-sew, some ready-to-wear and some traditional apparel that represents a knitwear company very well and allows us to explore fashion at a luxury level outside of knits.

L+T: Recently, there has been an increased interest in and excitement surrounding the iconic Coogi sweater. What do you think is behind this current trend?
WEM: When something is iconic it sort of never goes away. It just gets put aside for a little while. Anything with value always comes back. When you have an absence in the marketplace it creates a desire and thirst to see the brand again. Combine that with what Instagram does – which gives you instant visibility of what you’re doing and what you’re thinking – and it allows people to appreciate the visual and also connect with that person or brand in that moment in time. People remember Coogi. Retailers and consumers share a similar story;  “I used to buy this when I was young.” To connect that thread of commonality in the ‘90s is a huge thing right now that’s being revisited by a number of retailers that are reviving brands like Etonic and Coogi.

L+T: Coogi first became popular amongst the hip hop crowd during a more flashy time period. Being that this current era is a little more understated, fashion wise, was it a challenge designing the latest Coogi collection?
WEM: I love fashion, so I’m pretty much in tune with all of the trends and themes in the fashion industry right now, like this whole all black look and so many other looks that are currently happening. We’re counterintuitive to that. You have to stay true to what the brand was, right? We have two old retro patters and two new patterns. We introduced two retro patterns, which is the “Biggie Smalls Sweater” pattern and then we introduced a fashion pattern that was well liked. The new patterns are a camouflage take, which had never been done by Coogi before. We felt that was a no-brainer, because camo is sort of a fashion staple now in many people’s wardrobes. There is also a technique we decided to implement, which is a gradual fade from a solid color to a more colorful portion of the sweater. It was an experiment that worked. With both the camo and the fade, we made something interesting with a story behind every pattern.

L+T: Are there any artists currently out there that you feel could embody the Coogi brand in a way similar to how Biggie did in the ‘90s?
WEM: Rappers today, if there’s any indirect connection to Biggie, they want it. It’s a universal love you experience when you mention Biggie. Everyone wants to be associated with him. We just plan to grow the brand where we keep that in tact. That’s our pinnacle guy that’ll be hard to topple. Everyone may want to be associated with the brand, but Biggie is probably the biggest and best endorsement we’ll ever get on the street wear side. While it hasn’t manifested itself just yet, I do think we’re getting love from a lot of people across the board. One thing that we realize is that we have the opportunity to start with a clean slate. When we sat with Rag & Bone the funny thing is that they actually suggested that we put Coogi on some rappers, because it would’ve been interesting for them. We chuckled, because they didn’t know exactly how powerful the brand was twenty years ago in the urban market.

L+T: Why do you think the Coogi sweater became such a fashion staple in hip hop culture?
WEM: One word – aspirational. The key thing back in the ‘90s was to evolve and grow. Hip hop culture has always been about to evolving and growing. Also, Coogi is viewed as one of the first to embrace hip hop and its culture and one of the first to accept the culture for what it was and not get too rattled up about it. I think the hip hop community will never forget that.