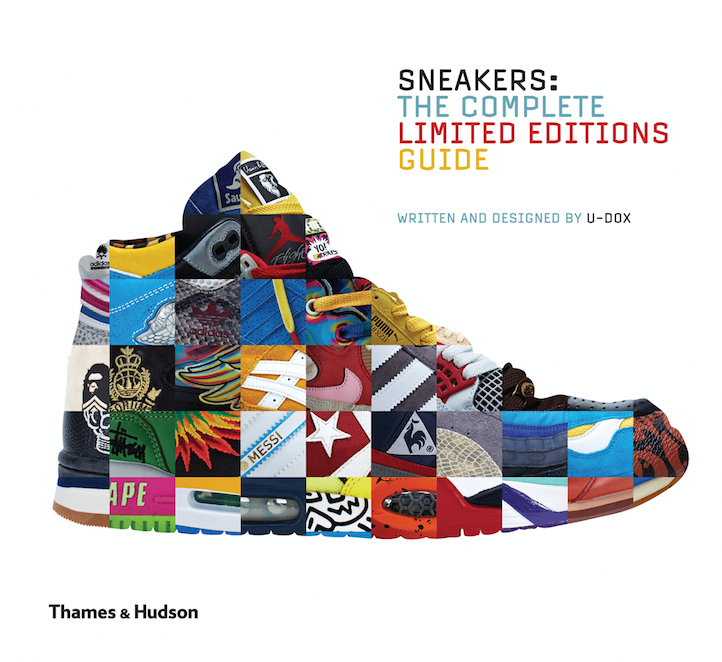 One of the most coveted and sought-after items for a sneaker collector is a limited-edition pair of sneakers. Models that are extremely rare or simply hard to find and that are often collaborations between a sneaker powerhouse like Nike or adidas and tastemasters, trendsetters and cultural icons throughout the worlds of fashion, music and art can have collectors, sneakerheads and (especially) Hypebeasts camping out for days and shelling out hundreds, if not thousands of dollars in hopes of getting a pair. For those wanting to guarantee that their sneaker collection isn’t missing the necessary limited-editions or those who are just obsessed with all things sneaker culture, there’s a new book for you. From the London-based creative agency, U-Dox – who brought us Sneakers: The Complete Collectors’ Guide – comes Sneakers: The Complete Limited Editions Guide. This definitive guide, which features over 300 exclusive designs from brands that include Nike, adidas, A Bathing Ape, Converse, Vans and more, offers an in-depth look into what separates these special editions from their standard counterparts.

Ahead of Sneakers: The Complete Limited Editions Guide‘s April 1st release, Life+Times caught up with Niranjela Karunatilake, who served as Head of Production and curator for the Sneakers sequel to talk limited-editions, sneakerheads and the future of the series.

Life + Times: Where did the idea for Sneakers: The Complete Limited Edition Guide originate?
Niranjela Karunatilake: The success and popularity of Sneakers The Complete Collectors’ Guide led to [publisher] Thames & Hudson reaching out to propose a sequel. After a few discussions, we decided the right way to continue the series would be to focus on limited editions. It felt like a natural progression, because the subject had been touched on in the first book, which featured strong, iconic collaborations such as the adidas Superstars x A Bathing Ape and Nike Dunk Hi x Supreme. After that first book released, it’s safe to say the industry exploded with limited editions, making sneakers more globally relevant and desired by many.

L+T: This is a sequel to Sneakers: The Complete Collectors’ Guide. How do the two differ?
NK: Sneakers: The Complete Collectors’ Guide is a guide to the most iconic and influential silhouettes of all time, up until when the book was published, which was in 2005. It explains what makes these models so important in sneaker culture and how they have impacted other industries such as music and fashion. Sneakers: The Complete Limited Editions Guide follows by showcasing a wide variety of editions that were only ever released in limited numbers and covers a range of brands, materials, hype, etc. To help us keep things consistent with the first book, we included as many models that were featured in the first book as possible. By doing this, it not only helped us decide what to feature, but also elaborated on the story of sneakers in general, showcasing which models took off and which failed to get successfully retroed. We also had to touch on new technologies and models that have made a huge impact on the industry within the last ten years such as adidas Primeknit and Nike Flyknit.

L+T: What kinds of research went into finding and learning about all of these hard-to-find models?
NK: We researched through various books, blogs, magazines, forums, sneaker historians, press releases, brand representatives, collaborators and used our own knowledge of sneaker releases, which we have experienced and lived through.

L+T: What was your favorite part of putting this book together?
NK: Creating the concept photography. It was great to be able to tell the story of each sneaker through visual set-ups. Finding the appropriate locations and props, while working with a strict budget was not easy, but highly rewarding once seeing it all come to life.

L+T: So far, you’ve explored the impact of sneaker culture and the history of limited-edition models. What do you think will be the next aspect of the sneaker world you’ll investigate?
NK: It would have to be something along the lines of “Future Classics.”

L+T: What’s your favorite limited-edition pair of sneakers? What is it about that pair that makes them dope?
NK: There are way too many to choose from, but in terms of limited editions featured in the book, it would have to be the Nike Air Mag. We were lucky to be able to get hold of a pair to feature in the first place, but then the magic of being able to shoot them on an actual hoverboard and have them hovering through East London was definitely a memorable part of making this book. Also, the release itself brought a fictional sneaker created for the film Back To The Future II to life and raised an amazing amount of money for the Michael J. Fox Foundation.

L+T: U-Dox is a creative agency that specializes in marketing campaigns, among other things, so what qualifies the team to curate books on sneaker culture?
NK: It all started in 1999, when a group of unorthodox creatives and developers, who shared a love of culture and technology, set out to establish a disruptive, multi-disciplinary creative agency with digital at its core. Using their extensive knowledge in sneakers they founded a highly valued online sneaker resource called Crooked Tongues, which ran alongside creative agency U-Dox. Crooked Tongues was admired for its straight spoken and insightful views on the industry shared through an online forum that created a united global sneaker community. Throughout the years since, U-Dox has continued to have a strong connection with the sneaker industry and have consequently employed people who also have the knowledge and the passion.

L+T: In your opinion, what does it mean to be a sneakerhead?
NK: I believe different people may have different perceptions of a sneakerhead, but to me, a sneakerhead is someone who has grown up with sneakers in their lives. From a young age they would have had an affiliation with sneakers and that relationship has continued to influence their own personal style. They will always reminisce on times when they first saw a particular model and have memories of the brand campaigns, innovative technology or colorways that never got retroed. They are not only interested in the sneaker’s aesthetics. They also like to know about sneaker’s back story and they will never be fooled by hype.