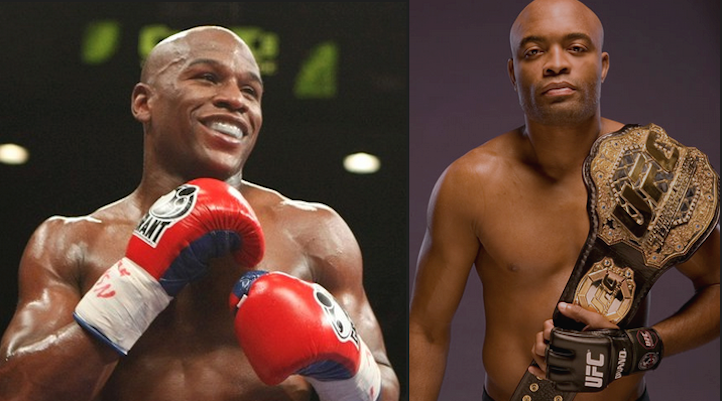 Who is the best fighter on the planet?

It’s truly an apples and oranges question when you try and compare a boxer to a mixed martial artist, but people will do it anyway. The 2012 ESPY Awards asks that question with their “Best Fighter” category that finds nominees Floyd Mayweather, Jon Jones, Anderson Silva and Andre Ward squaring off against one another. But let’s take it a step further.  Let’s not ask who the best fighter of the past year is. How about who is the best fighter of the past decade?

The two current kings of the mountain are UFC middleweight champion Anderson Silva (32-4, 19 knockouts, 6 decisions) and boxing’s current pound-for-pound king Floyd Mayweather (43-0, 26 KOs). These two are not only at the top of their game right now, but they are arguably two of the greatest fighters of all time.

But who is the best?

Floyd Mayweather’s illustrious boxing career started in 1996 with a victory over Roberto Apodaca and he never, ever looked back. He captured his first title in 1998 when he became the lineal & WBC super featherweight champion against the late Genaro Hernandez. He would go on to claim titles at lightweight, light welterweight, welterweight and light middleweight while putting a beating on the likes of future hall-of-famers Oscar De La Hoya, Juan Manuel Marquez, Arturo Gatti and Shane Mosley. His recent war with Miguel Cotto saw Mayweather depart from his defensive style and trade punches with the Puerto Rican in one of the few toe-to-toe all-action bouts you will ever see from the man known as “Money.” And with Manny Pacquiao’s difficulty with Juan Manuel Marquez and controversial loss to Timothy Bradley, Mayweather has planted his flag on the mountaintop as king.

Anderson Silva’s mixed martial arts career began shortly after Floyd Mayweather’s in 1997. But unlike Mayweather, Silva took his lumps early on. Silva lost his third fight, 13th fight and 17th fight before becoming the dominant force he is today. The latter loss was to Ryo Chonan’s astounding flying scissor heel hook that sounds as insane as it is rare to see executed. But after those losses, Silva has gone on a remarkable run (with the exception of a disqualification loss to Yushin Okami in 2006) that has seen him annihilate a vast majority of his opponents. The longest reigning champion in UFC history holds the record for most consecutive title defenses with ten. He has also taken home four “Knockout of the Night” bonuses and two “Submission of the Night” bonuses. Simply put, he’s a bad man.

You can argue that Mayweather has never lost a fight and that should automatically vault him over Silva. However, mixed martial arts is a far different beast in both the way fights are put together and how professional records are viewed. The probability that a fighter ends his professional career undefeated is slim to none. With the much smaller gloves and the numerous ways to be defeated, expecting a fighter to string together 10 or more victories in a row is beyond comprehension. Not to mention that in boxing promoters carefully select the opponents for their fighters as they groom them for the big stage. This is why you’ll see a number of boxers with bloated and unblemished records but their portfolio lacks a single recognizable name. In MMA there is no grooming session. Fighters are immediately thrown to the sharks and it’s either sink or swim. The concept of a “tune up fight” is non-existent and the level of competition is hiked up with every fight so the possibility of taking a loss is greater than that of a boxer who faces lesser opposition until he’s “ready” for a title fight. Suffice to say that it is more difficult to go undefeated in MMA than it is to boxing.

But with that being said, how can you discredit Mayweather and penalize him in this “Best Fighter” showdown for not losing a fight? Easy, because people do not like him. But let’s eliminate the polarizing public persona known as “Money” for a moment and focus on the fighter. What Floyd Mayweather has done, and continues to do, is nothing short of remarkable in the sport of boxing. For sixteen years, Floyd Mayweather has dominated the game. Every opponent put in front of him  – aside from Jose Luis Castillo, who he fought with an injured shoulder — has been vanquished with relative ease. The manner in which he fights is considered art. His remarkable hand speed, impeccable defense and ability to take away his opponent’s weapons have made him a master of his craft. Good luck naming an opponent who badly damaged Mayweather. The hardest punch he took, courtesy of Shane Mosley, was handled with great poise. Outside of that, Mayweather has played chess while his opponents continue to play checkers.

The lone knock on Mayweather is that he has long been criticized for not facing the best fighters in his division while in their respective primes and not having an archrival for a career defining fight. Fighters like Antonio Margarito and Miguel Cotto were both turned down by Mayweather when they were at the top of their games. The closest thing Mayweather had to a classic back and forth bout was his recent battle with Miguel Cotto. But this was a Cotto that had been stopped by Manny Pacquiao and Antonio Margarito so the mystique was gone. He has also yet to face his archrival, the aforementioned Manny Pacquiao. The Filipino is arguably 1B to Mayweather’s 1A on boxing’s pound-for-pound lists and in any other athletic competition these two would have already collided.

As for Anderson Silva, he doesn’t have the option to pick and choose his opponents. UFC President Dana White and his matchmaker Joe Silva set up all of Silva’s fights. Whoever is the number one contender gets a shot at Silva. It’s really that simple. And all Anderson Silva has done is decimate those put in front of him. Since entering the UFC in 2006, Silva has steamrolled the competition in middleweight while also stepping up to light heavyweight and taking out heavier opponents. It’s not the fact that he’s winning, it’s how he’s winning. Go back and watch tape of “The Spider” vanquishing middleweight champion Rich Franklin. Check out how he handed former PRIDE FC champion Dan Henderson. Witness the Muhammad Ali-like destruction of Forrest Griffin. The front kick that he fed Vitor Belfort was nothing short of marvelous and his tantalizing execution of Chael Sonnen in their highly anticipated rematch at UFC 148 was simply breathtaking.

Who do you give the edge to? The man who is undefeated but has yet to face the number one challenger to his throne or the fighter who has blemishes on his record but has destroyed each and every number one contender put in front of him?