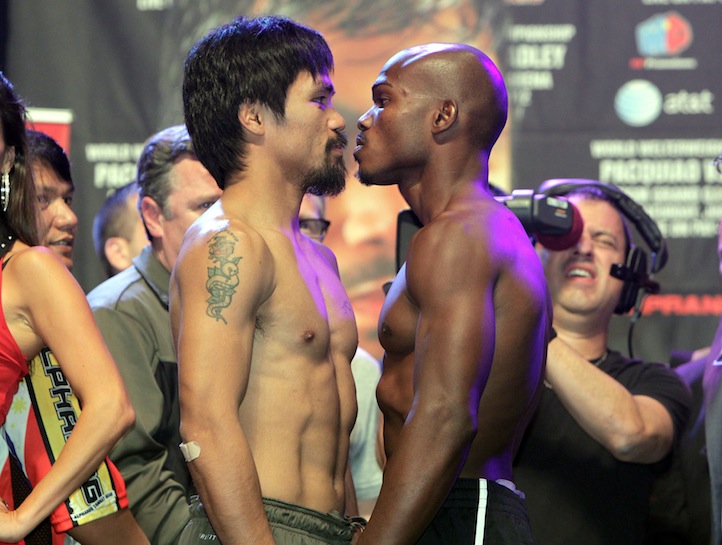 June 9th, 2012 will go down in history as the night where, despite what you have heard, nobody won. Not the sport of boxing, not Manny Pacquiao, not Bob Arum, not the fans and not even Timothy Bradley.

It’s the night where the dream match between Floyd Mayweather and Manny Pacquiao went up in smoke amidst a storm of controversy. It’s the night where Juan Manuel Marquez shook his head in disbelief wondering just how Timothy Bradley was granted in one fight, what many felt Marquez earned in at least one of his three fights with Pacquiao. It’s the night where boxing aficionados were unable to deflect the stones of disgust cast their way by naysayers on social media and instead shrugged indifferently and conceded that perhaps the skeptics are right: the sport of boxing is dying.

It was supposed to be just another night at the office for Manny Pacquiao. After barely escaping with a controversial victory over Juan Manuel Marquez last November, the Filipino set out to prove to that his best days were not yet behind him. In order to do that, he had to take on a high risk, low reward opponent in undefeated Timothy Bradley. Although Bradley was a virtual unknown to the casual fan, boxing pundits knew better and figured that Bradley’s youth, toughness and speed could be the undoing of an aging Pacquiao who has had his attention spread thin between marital issues, politics and religion.

But after twelve rounds, Pacquiao silenced the naysayers with what appeared to be a dominant performance against a game fighter in his boxing prime that did everything he could to knock Pac Man from the lofty perch. When the final bell rang, Pacquiao smiled and strolled to his corner while Bradley hung his head in resignation. Scanning the audience from press row, not a single look of concern was in anyone’s eyes. Some ticketholders made their way towards the exits to avoid the rush since a Pacquiao victory was a foregone conclusion in their minds. Boxing scribes shared their scores in a competition to see who was the most generous towards Bradley. A couple of journalists adjacent to me mused as to who was going to ask the first question about Mayweather at the press conference.“I dare you to ask Pacquiao if he’s going to visit to Mayweather while he’s in jail,” one joked.

We were used to this. After every Pacquiao or Mayweather fight, the inevitable question regarding when the two will fight is brought up and it is up to us journalists to find creative ways to ask the same damn question over and over again – even if most of us already know the answers. But our conversation was interrupted when ring announcer Michael Buffer announced the first judge’s scorecard as 115-113 for Bradley.

The MGM Grand Garden fell eerily silent for a few seconds as disbelief swept through the arena. Fans stopped heading towards the exit and everyone began to look around trying to make sure they heard correctly. The next score was read: “115-113, Pacquiao.”

The arena was still in a state of shock. Just about anybody with the gift of vision knew the fight wasn’t this close. Something was wrong. The final 115-113 score was read and Buffer’s voice nearly cracked in his own disbelief.

Nothing else from Buffer could be heard as a cascade of boos and expletives filled up the arena. Social media exploded with shock and awe as the mindboggling result stampeded through timelines. Even those who could care less about boxing were stumped at what had took place. Timothy Bradley’s controversial (read: tragic) split decision victory over Manny Pacquiao to hand the Filipino his first defeat in seven years damaged the sport of boxing beyond recognition. It wasn’t that Pacquiao lost, it’s the way he lost. If Bradley was the better fighter, we could live with the decision. But when three blind judges inexplicably award the decision to the man who himself conceded defeat to Bob Arum moments before the results were read, everything that has ever been wrong about boxing is brought to the forefront for everyone to criticize.

As the scene shifted to the conference room, Top Rank promoter Bob Arum took to the podium and addressed the travesty in an atmosphere that resembled a funeral. Perhaps it was fitting because, for many, boxing died on June 9th. “I’ve never been as ashamed of the sport of boxing as I am tonight,” he uttered. If he can say that after 47 years in the sport, something is certainly wrong and the aftermath of the Pacquiao-Bradley controversy casts a dark cloud around the future of the sport.

The foolishness and naivety that has permeated from those that know little to nothing about the sport has been extraordinary. Voices shouting that this is why the UFC is better are throwing stones in a glass house because their sport suffers from heinous judging as well. However, boxing’s loss is the UFC’s gain, as fans are switching over to world of mixed martial arts rather than deal with the heartbreak of today’s current boxing model. Others suggesting that the fight was fixed to make more money off the rematch certainly must not be aware that this fight wasn’t a sellout nor will it be a pay-per-view success and it benefits nobody to do it again. There are bigger fish to fry for Bob Arum and a Bradley-Pacquiao rematch wasn’t one of them.

That Mayweather-Pacquiao dream bout that everyone fawned over was dealt a mighty blow. The biggest fight that could possibly be made since Ali-Frazier and the extraordinary amount of money it was set to draw was built on the mystique that neither fighter could be beat. But when one of the marquee names is beat by an unknown, the excitement is taken down several notches. Mayweather-Pacquiao has gone from “The Fight” to just “a fight.”

Instead of Mayweather-Pacquiao, are we supposed to look forward to Mayweather-Bradley? Absolutely not. Rest assured that Floyd Mayweather is weighing his options from inside a jail cell. His legacy has been tied so closely to that of Manny Pacquiao’s that it is unfathomable to continue this hype train without his nemesis matching him step for step. Every great fighter has an arch rival that defines his career and Mayweather just lost his to some guy named Timothy Bradley that nobody thinks won the fight. How bizarre is that?

Manny Pacquiao is now stuck having to redeem himself in a rematch of a fight nobody thought he lost. To make matters worse, there wasn’t much excitement surrounding this contest so how much public interest could there be heading into a rematch that nobody wants to see? Even if he wins the rematch, time has just been wasted righting the wrongs of the judges. Meanwhile, soon to be 39-year-old Juan Manuel Marquez sits as the odd man out. He pushed Pacquiao to the brink on three separate occasions as many felt that he won at least one of his fights with Pacquiao. He earned it, Bradley didn’t. Maybe this was the Boxing Gods sick and demented way to extract its revenge. It was supposed to be Pacquiao-Marquez IV on November 10, 2012. Now it’s Pacquiao-Bradley II.

And finally, poor Timothy Bradley. Even though he had his hand raised in victory, how satisfying can it be when nobody thinks you won, perhaps not even yourself. “It’s tough for Tim to win this title and get all of the boos and negative responses,” Bradley’s trainer, Joel Diaz said. “He didn’t get any respect before this fight and he isn’t getting any respect now.” He’s gone from publicly unknown to public enemy number one overnight through no fault of his own. His best bet is to assume the role of the villain in an attempt to try and get people to care about a rematch.

The only bright spot to come out of this is that boxing is being talked about on a mainstream level once again. Everyone has something to say about the sport of boxing. Unfortunately, it’s for all the wrong reasons.