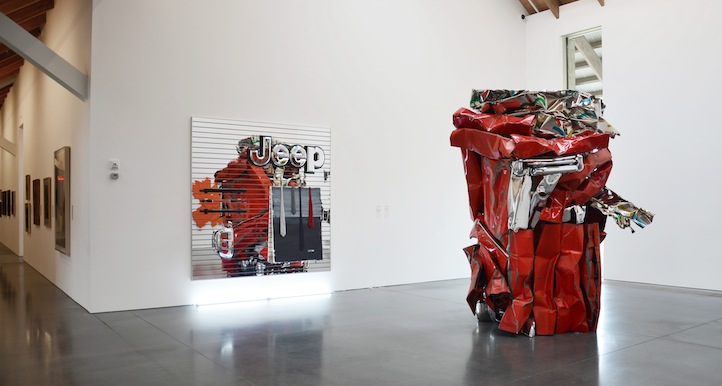 The artist Josephine Meckseper investigates car culture, capitalism, and the architecture of Ludwig Mies van der Rohe in her current exhibition at the Parrish Art Museum in Water Mill, New York. The German-born artist who lives and works in New York induces spectators to consider their surrounding environment and the way consumer goods and presentation alter perceptions. Her work references automotive advertorial materials such as her 2009 film, 0 % Down, which is effectively a mashup of automotive advertising and the 2011 mixed media work entitled “Crow” in which a taillight, a Jeep logo and men’s ties are displayed on reflective panels typically found in car dealerships. Meckseper’s solo exhibition at Andrea Rosen opens in November, in which she will turn her attention to focus on exploring the impact of Weimar Germany as a predecessor to the Nazis and World War II.

L+T: What were some of your thoughts when you were beginning the installation at the Parrish Art Museum?
Josephine Meckseper: The first thing that jumped to my attention was the building itself. It was finished last year and it was built by Herzog & de Meuron, the Swiss architects. It’s a very striking building. It’s mainly concrete and wood, and it relates to the local architecture of the east end. It almost looks like a really large barn. At the same time I’m interested in how modernism, in particular Mies van der Rohe, has influenced that contemporary generation of architects like Herzog & de Meuron. A lot of my works involves platforms or vitrines. I thought it would be interesting to expand or play with the architecture of the museum. I ended up building two large outdoor vitrines to mirror the architecture, but also to function conceptually and similarly to Mies van der Rohe’s buildings. His houses were often made for art collections. They were built specifically to have particular lines in a way that would work best for the particular art collection for the person that he was building it for. There are these two steel and glass vitrines in front of the museum. A lot of people believe they are part of the building and it has exactly what I wanted — the dual function of architecture and art. 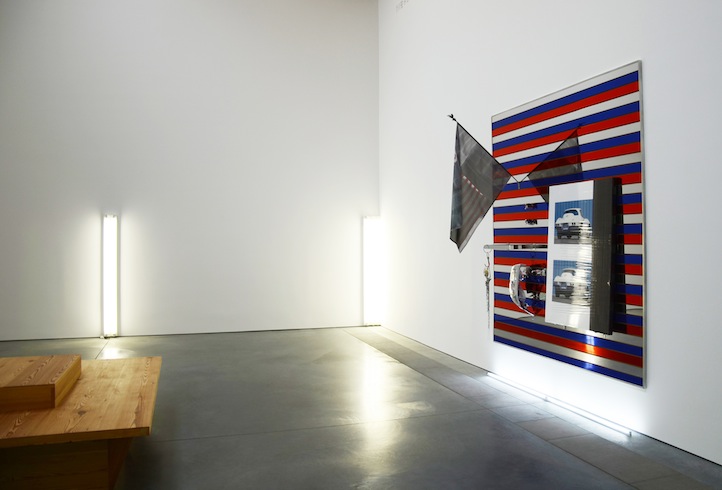 L+T Where is the soul in a space or a structure, using this work as an example?
JM: It was more like looking at the museum as an overall vitrine for artworks, to even interact with other works in the collection. Instead of having one large defined space for my show, there are also works spread throughout the museum creating a much more open approach.

L+T: How is your interest in the automobile incorporated into this exhibition?
JM: The interesting thing is the location of the museum, which is right on Interstate 27. You literally have large windows facing the 27. When I visited the museum for the first time I was completely mesmerized at the traffic going by. Everyone who is out there in summer knows that the traffic is hellacious. People are upset about being stuck in the traffic for hours. It reminded me of Jean Luc Godard’s “Weekend,” not weekend being families stuck in cars, but that it’s the endpoint or instability of capitalism. A destination like the Hamptons can easily turn into a more dangerous place. It sort of happened during the recession, but not in a dramatic way like Detroit. Literally at the museum the car traffic is mirrored in this installation. The piece is actually called “Sabotage on An Auto Assembly Line.” This refers to when unions used to slow down the production line. Instead of striking, workers were still compensated but they were actually sabotaging the production to get higher wages. The piece is about how capitalism has a grip on society, but there are still ways to rebel against it. 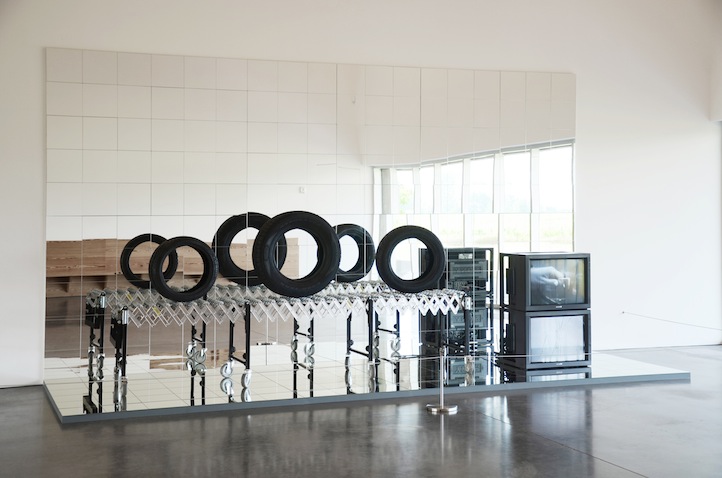 L+T: Do the passing cars then function as moving sculptures?
JM: The traffic is mirrored in the sculpture, but the sculpture itself is a section of the assembly line with car tires on top. There are also two stacks of shattered video screens so it looks like it was smashed in during the riot. The video 0 % Down is a collage of car commercials that I did in 2008 when the car industry was faltering.

L+T: This is part of a larger conversation in your work about the economy and industry. Do you think the changes over time impact how the work is framed?
JM: In a weird way actually the present is more related to the past in my work. The core of what I realized while I was working on my next show, which is going to be in the Fall, is that it actually revolves around World War II and Germany. When I grew up it’s very hard not to see things in the relationship to the atrocities of Nazi Germany. I only realized in the last decade or so that everything I do is actually in reflection of having that knowledge. Even though I was born 25 years after the war ended it was something I literally could feel in the air and see on people’s faces and how they were affected. The interest I have in modernism and Mies van der Rohe questioned what was before that atrocity and how could it have been different. I was reading this book about (Mies van der Rohe’s German Pavilion for the 1929 International Exposition in Barcelona.) There was something about the alienation or the lack of human presence work in Mies van der Rohe’s work and the silence that was actually already a predecessor for the conditions for Nazi Germany. 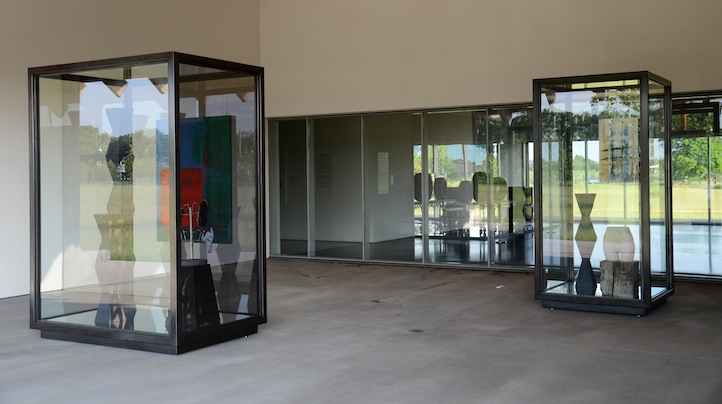 At the same time, I was referencing the current demise of the car culture. Innovation have been purposely slowed down, like the electric car and other ways to build cars. It’s more about manipulation. The possibilities are probably are already there. All these things kind of play into my work. I don’t think people would necessarily notice it, but those are the things I was thinking about when I was making the work. Then are those subliminal parallels — thinking about what happened in World War II and the depression in Germany. What people do notice are the relationship is that are more directly incorporating logos like car dealerships. Literally if you leave the museum and go around the corner there’s the strip where all the car dealerships are. It’s one after another. It’s a comment on that.

L+T: The show you’re doing in November. What is the work going to be?
JM: Right now it’s going to be more specifically about Weimar Germany. I’m making sculptures and new vitrines. I have these photographs of the World War I monument in my hometown. It’s this big eagle and it looks very unusual and menacing. It’s sixty feet tall. I’m going to make black and white prints of that, which also have this function as a monument to the Romanian soldiers in Brancusi’s Column of Infintie. There is a more historical aspect to the show.

L+T: Your work is conceptual but very physical. How you build these massive hug things? How do you approach the specific technical aspects?
JM: I’m very drawn to technical processes and it’s what I really like doing. It’s hard to do it in New York, especially in Manhattan. My studio is not at all big enough but a lot of it is in different places with fabricators. I make the rounds and look at things in production. They always come together in the exhibition space, but not in my studio.
It’s a bit complicated, but it’s why I’m fascinated by Detroit. I would love to have a massive space where I can see things, rather than to imagine what it would look like. 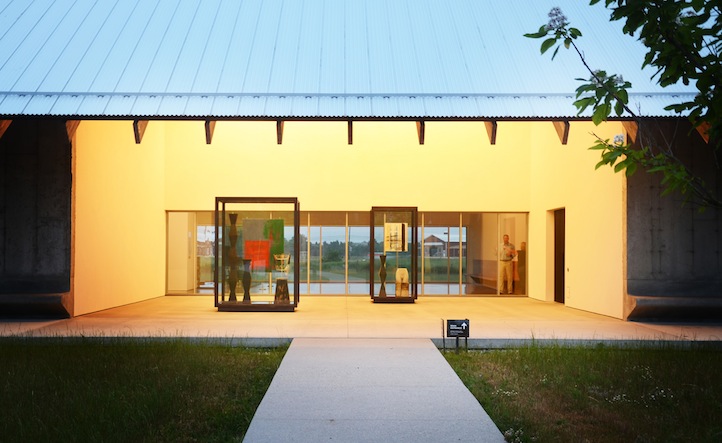