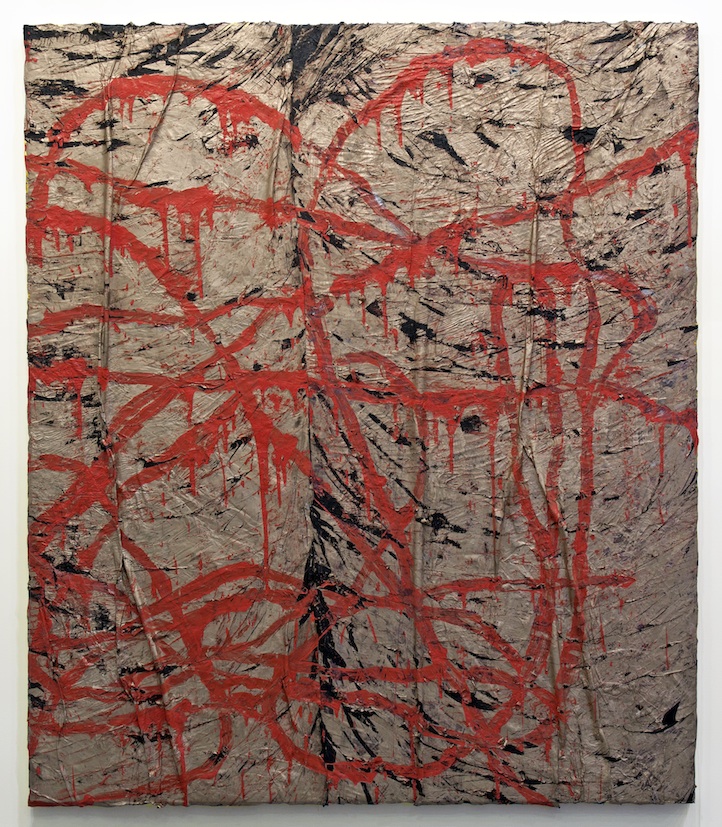 When Angel Otero was growing up in Bayamón, Puerto Rico he dreamed of moving to New York to live as an artist. “I wanted to some day be in a studio in an old factory with my paintings around and see the city of New York from my window. That was a major dream for me,” he says, with an easy grin on his face. “Now I’m pretty much living it; it’s awesome.” At age 24, Otero left the island to pursue both a BFA and an MFA at the School of the Art Institute of Chicago. When he graduated, he was the recipient of the prestigious Leonore Annenberg Fellowship in the Visual Arts, a prize that helped him to establish a studio in Bushwick, Brooklyn. Now 32-years-old, he has had considerable success since realizing his New York dream. He is represented by Lehmann Maupin in New York and Kavi Gupta in Chicago. His work is currently on view in his first solo museum exhibition “Material Discovery” at the SCAD Museum of Art in Savannah, Georgia. He will have his second exhibition at Lehmann Maupin in the fall. In March, he returns to Puerto Rico for his first show on his native island at the Walter Otero Gallery in San Juan. Otero’s painting and sculptures are arresting — each piece is dense, textured, and substantive. Otero spoke to Life + Times in Savannah where he participated in a panel discussion at the SCAD Museum of Art for the annual showcase Define Art.

L+T: Tell me about where you grew up.
AO: I grew up in Puerto Rico. I was born in a town called Santurce and moved to Bayamón and grew up around that area. I always wanted to be in New York. My mother is Nuyorican. She went to Puerto Rico to study and eventually stayed there when she met my dad. The house had a lot of music, a lot of soul. Since I was a kid, I developed an interest in music, old soul and hip-hop. New York was an interest to me since I was a kid, reading about de Kooning and Pollack. The New York School fascinated me.

L+T: What are the ideas behind your work?
AO: I’ve always been passionate about painting specifically. That’s what drives me — painting and all the drama that goes with it. Painting has been called a dead medium for so long and that we should move to technology in art. I didn’t want to fall into that. I accepted that painting goes through certain moments of questioning. I wanted to keep going with it and researching and exploring it. I was trying to explore with the medium of oil painting. In school, professors criticized my work harshly. That was frustrating. I converted that into a hunger, trying to put out there what painting is. One day, I started making this painting that I didn’t like. I scraped the paint off the canvas to reuse the canvas and the material, that muddy oil painting. I kept it in my studio, which a lot of painters do. I remember that moment the pure impulse in a moment of exploration: I grabbed a big bunch of dry oil paint and collaged it on wet paint. I thought it was interesting to construct a painting based on a collage made of dry oil paint. These pieces works were really appealing and I finally started having some good critiques at school. 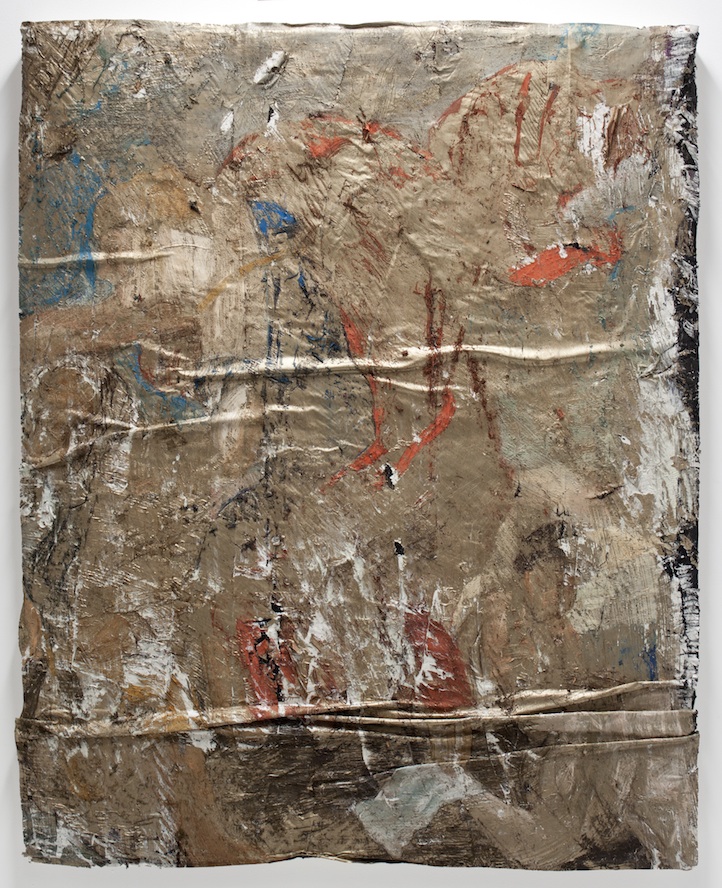 L+T: It sounds like you were developing a voice.
AO: Yes, that voice is so important. When I ran out of the dry paint, I started to painting on glass to make the paint dry as soon as possible and then I’d scrape it off the glass and then collage it. By this I found out that I was creating some sort of print. I noticed that the stains that were in the glass were getting printed out of the new color I was scraping. I started embracing the idea of making paintings over a surface of glass so that I could eventually scrape off so that the painting will be distorted. The work created a conventional painting over the glass and eventually I covered it with thick layers. One month later I scraped it off of the glass, which revealed the painting I did. Eventually it reveals itself in a way that you don’t have control of. It’s exciting. It’s a surprise to see a painting that you’re not sure how it’s going to come out, that is going to make you question if you like it or not. 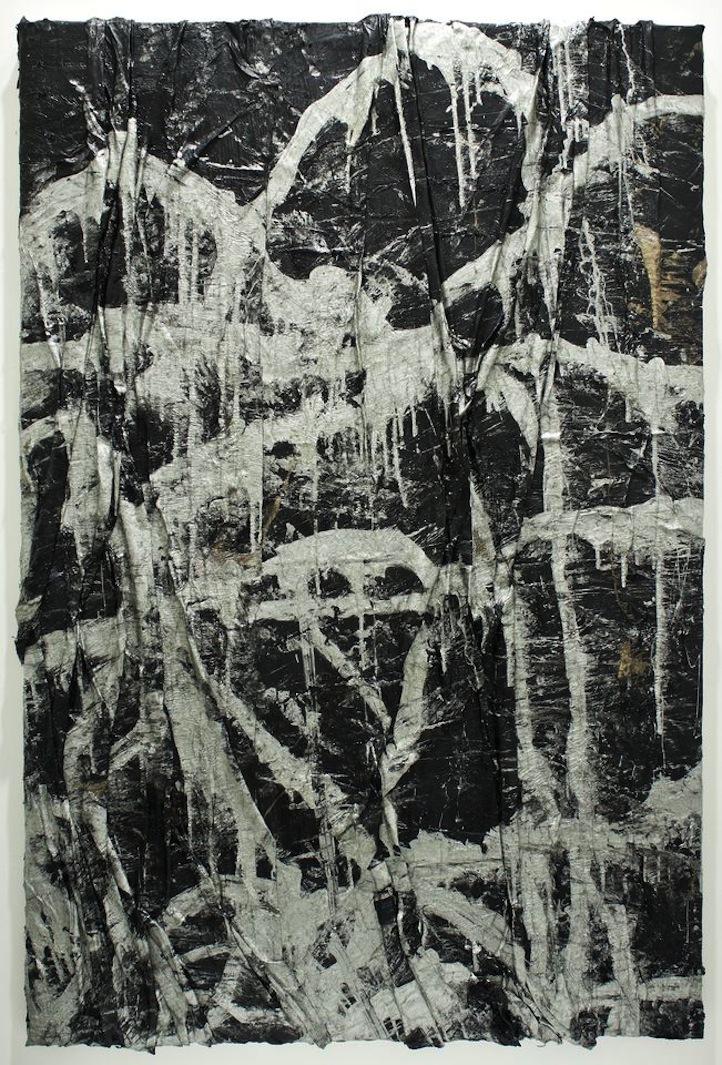 L+T: It’s like peeling an onion to find out more about yourself.
AO: The process created this shield to protect myself from any connection with sentimentality. Sentimentality, from what I have sensed seems to be a sort of double edge in the art world. Sometimes we feel like painting things but we’re not sure because of that intimidation of being judged in some sort of way. The process became a protective vehicle to paint my interest, but also to hide it. You go into different interests over time. Lately my interest has been Nicolas Poussin. I have been investigating this French classical painter and reproducing his work. Some other times it’s purely gestural.

L+T: How do the splashes of color play into your work?
AO: Pure impulse. Sometimes I want to work toward something very white and I get into white. Other times may be for some reason I’m into silver or aluminum. It comes and goes. Since the history of painting, one kind of work predicts what’s coming next. Nothing is brought out of scratch and I follow that rhythm with my work. It could be a moment of chance that predicts the idea for something else.

L+T: What are you working toward now?
AO: My sculptures are connected to my painting. I do sculptures where I combine porcelain and steel. I take fences or other kind of metals and domestic materials and I combine them with the porcelain and I fire them together and they create a tension between two materials. We are very sensitive to our perspective on materials. I wanted to create a combination of the senses with these two materials. Sometimes they look dark and weird. The studio is a constant exploration for me. Sometimes I feel I might fall into a systematic moment and I don’t want that. You come into an uncomfortable ground and look at things differently. In the studio I’m always putting things together and seeing how they appeal to me. They take me somewhere. I trust my ignorance a lot.