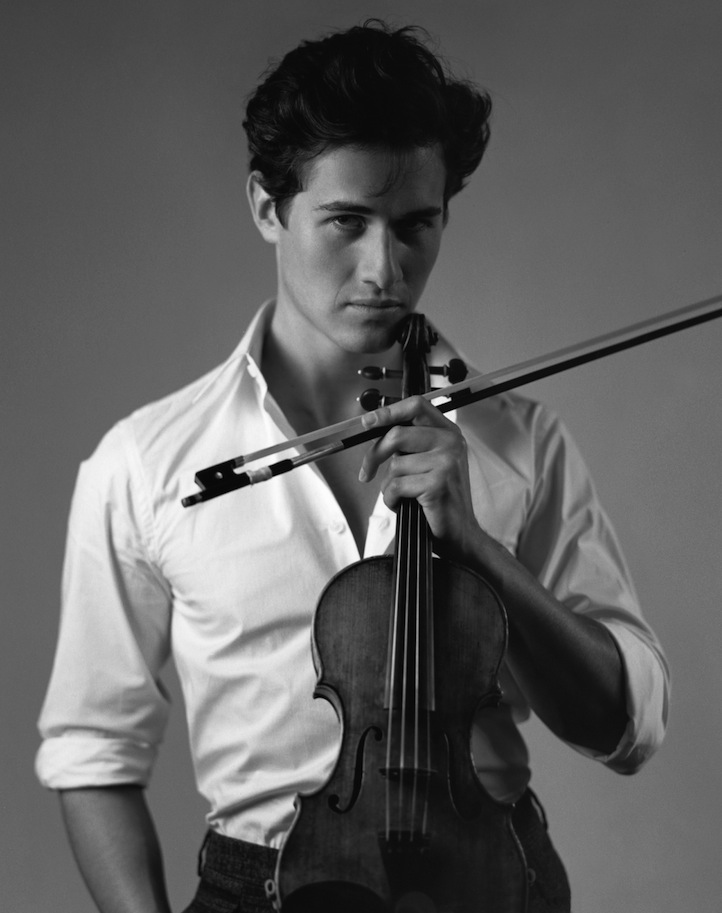 Violinist Charlie Siem has performed on concert stages from The Royal Albert Hall to Carnegie Hall, has toured with the Moscow Symphony Orchestra withYuri Simonov and the Czech National Symphony with Libor Pesek and has played his instrument of choice with the London Symphony Orchestra, the Royal Philharmonic, the English Chamber Orchestra, and the Bergen Philharmonic. But there’s something about his infectious yet soothing sound that has captured fans like Vivienne Westwood, Lady Gaga, and most prominently, Dunhill, the fashion brand in which he acted as a global face of their 2011 “Voices” campaign. Mario Testino has said “Charlie Siem brings a freshness into the world of classical music” and we certainly agree. Here, we caught up with the young talent and realized, beyond his artistic integrity, he’s one of the most eloquent young men we’ve encountered.

Life+Times: You picked up the violin for the first time at the age of three. When did you realize you were gifted in this field? Was there a pivotal moment when you had this realization?
Charlie Siem: I felt comfortable physically with the violin when I first started playing and that natural inclination is what drove me to keep working at it. It has been a long journey since then and I continue to be challenged by it. I don’t know that there was a specific moment that made me aware of my direction. There are always ups and downs and it is that meandering course that keeps me on my toes.

L+T: Where did you study? Were there any mentors along the way who you feel had a profound impact on your role as a violinist?
CS: I have had a number of great violin teachers. While I was at school I studied with Itzhak Rashkovsky who has become a close friend of mine. He is an inspiring teacher and a wonderful man and I continue to learn from him in many ways. I then went to study with Shlomo Mintz who was one of my favorite violinists as a child. I first met him when I was 11 years old and it was a great privilege to have regular lessons with him after I left school. He is a phenomenal violinist and musician and merely observing him transformed my own playing. I suppose my violin studies were somewhat extra-curricular as I went to Eton and then Cambridge at the suggestion of my parents. I am so glad now that I managed to do both as it has enhanced my life immeasurably.

L+T: You’ve also penetrated the fashion world – you’ve serenaded Lady Gaga and performed during a Vivienne Westwood fashion show. Why do you think this industry has taken such a keen interest in your talent?
CS: I think that perhaps the fashion industry hasn’t been exposed to many classical musicians, as it is not an obvious connection. I came to that world in a very organic and unintentional way. I am so flattered and grateful for its enthusiasm and support as it has enabled me to play in some very unusual places to people that might not otherwise have ever known how dynamic and fun the violin can be!

L+T: You also have a unique relationship with fashion brand Dunhill. What exactly is your role with them? How did this come about?
CS: Dunhill used me as part of their “Voices” campaign over a year ago now along with other personalities from various fields. It was beautifully shot and included quotes from each individual illuminating what it is they do and why it is challenging. It appealed to me as it was done in quite a raw and real way that made it rather striking and unusual.

L+T: I know you’re influenced by the hip-hop world. How so? And, have any songs or albums influenced any of your performances?
CS: I have always enjoyed hip-hop, and from an artistic perspective it has intrigued me how powerful and creative the method of sampling is in relation to the rap that covers it. It is almost a sound equivalent to a visual artists’ collage effect. Many hip-hop tracks have sampled classical music and it works so well as one is torn between the dislocation and unity that it produces. It is something I would love to work with.