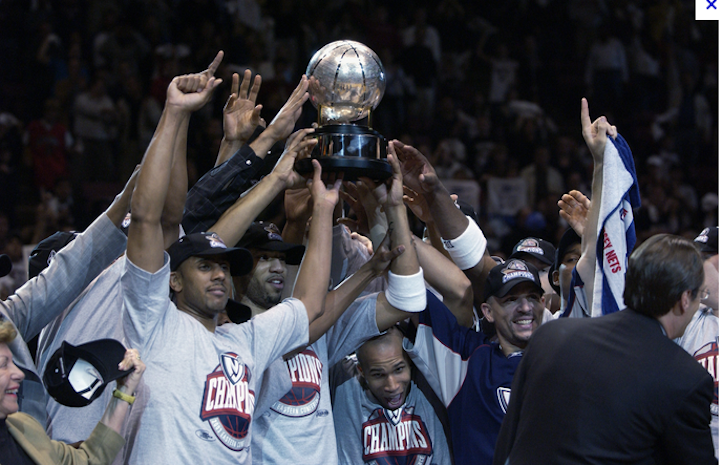 They no longer call New Jersey home. After 35 years of balling in the Garden State, the Nets’ future now resides in Brooklyn.

The Nets played their final game in New Jersey on Monday night, and the occasion was enough to bring out a sellout crowd to the Prudential Center. It was an emotional night for the 18,711 fans in attendance, who were treated to a firework-and-flash ceremony that featured several former Nets’ stars and players of years past and present. Honored players included Derrick Coleman, Kenny Anderson, Kerry Kittles, Todd MacCullough, Otis Birdsong, Darwin Cook, Michael Ray Richardson, Albert King and a pink suited Darryl Dawkins. Even the late-great Drazen Petrovic’s –the talented guard who was killed in an automobile accident in Germany in 1993– mother was there to honor her son and the franchise that made him a star.

Video messages were played from former players who were unable to attend the farewell, such as Buck Williams, Vince Carter, Kenyon Martin, fan favorite Brian Scalabrine and the all-time greatest Net of them all– Jason Kidd. Kidd –who led the Nets to back-to-back NBA Finals appearances in ’02 and ’03– wanted to be present but he’s busy in title defense with the Dallas Mavericks. “Being a Net was a great time of my career and a great honor,” Kidd said in the video. “So I hope you guys enjoy tonight and hopefully I’ll see you guys soon. Take care.”

Unfortunately, the Nets finished their final season in New Jersey with a home record of 9-24, having lost their last five games at the Rock, including dropping their final contest on Monday, in a 105-87 loss to the Philadelphia 76ers– who clinched the eighth and final playoff seed in the Eastern Conference with the win.

During the majority of their 35 seasons in New Jersey, the Nets were rarely dull despite the many losses –1,635 defeats, to be exact– accumulated. New Jersey die-hards were treated to some of the best moments in the sport during the Nets’ “Golden Era” and witnessed some of the best players the sport has produced. Fittingly, the home crowd bid farewell to the franchise the best way they knew how– with echoing chants of “Let’s Go Nets”. After three decades of round ball in New Jersey, Life + Times takes a trip down memory lane to uncover the most memorable moments –and players– in Nets history.