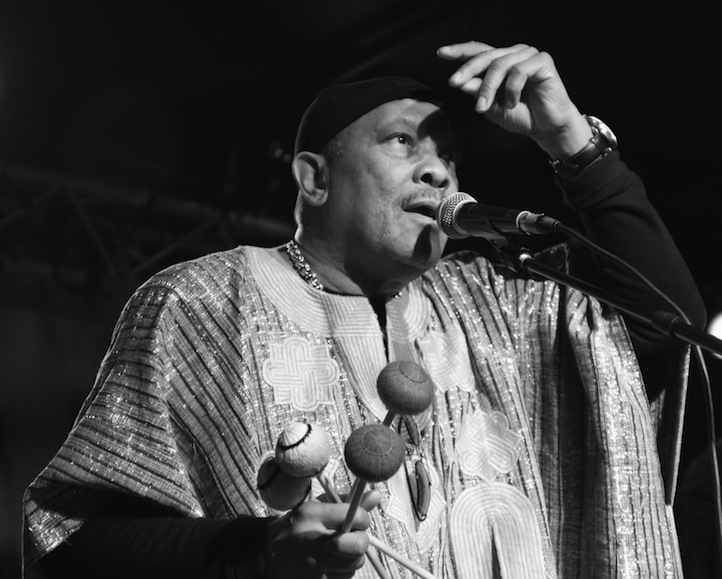 Along with James Brown and George Clinton, Roy Ayers is one of the premier artists sampled throughout the hip-hop canon, and one of the major influences on the evolution of soul and R&B over the past 20-plus years. His music, including hit records like “Everybody Loves The Sunshine,” “Running Away,” “Searching.” and “We Live In Brooklyn, Baby,” have proven timeless, and he’s since collaborated with Guru, Pete Rock, Robert Glasper, and The Roots, amongst others. Now 72-years-old, five decades after his first album, the jazz-funk vibraphonist, singer, bandleader and songwriter is still going strong, performing throughout the U.S., and fully aware of the affect his music has had on his successors.

“I’m just glad that I’m still able to play music and still travel and still be accepted by the young people,” Ayers told Life+Times. “Especially the rappers, it’s incredible the things that my music has done to them. I try to keep my youth, I try to keep my strength and I’m very positive about it, I have a good outlook. But I’m just interested in what the young people are doing, because I know that things that happened to me and other artists will happen to them.”

Life+Times: You started off in jazz, moved to funk, R&B and into hip-hop. How have you remained so open-minded, moving fluidly through these different kinds of music, when other “purists” insist on one kind of music?
Roy Ayers: I’ve been open-minded because when I grew up, I was [into] all the doo-wop groups, The Flamingos, Little Richard, Chuck Berry, James Brown, etc. In fact, I sang in a group called The Poets. Not The Last Poets, but The Poets, we did a record on Flash Records, an independent label at that time in Los Angeles, California. So I came up playing R&B, then I went to high school and I started playing jazz and got really influenced, listening to the MJQ [Modern Jazz Quartet], and of course Lionel Hampton, my idol. I was playing the vibes all this time, but didn’t get my set until my last year in high school. My point is that I’ve been influenced by all these musicians and different style entertainers, so Erykah Badu said, “You’re the king of neo-soul.” She told me this in a recording session. I said, “I am? What is neo-soul?”, she said, “neo-soul is a combination of your music. I pattern my music after your music,” that’s what she told me. “Myself, The Roots, Jill Scott and other people out of Philadelphia,” she said. I said, “Wow. Neo-soul, that’s a good idea, because neo-soul is a combination of jazz, R&B, pop, soul, Latin, you name it. I played everything.” So that’s what I’ve been doing. I used to tell people that I was a jazz-funk artist. And jazz-funk is a combination of many different styles, many different forms of music, so it’s a very natural thing for me to be as versatile as I’ve been.

L+T: What’s the best flip you’ve heard of one of your records?
RA: I like what Mary J. Blige did. She sampled “Everybody Loves The Sunshine” and she called it “My Life.” It was great. I received a couple platinum records from her for that, and I had never gotten a platinum record from anybody, so it was really a great reward to get that and also get paid. It’s always nice to get paid.

L+T: How has Black music changed?
RA: It’s changed considerably. With the emergence of hip-hop, it’s kind of cancelled a lot of things that were jazz-oriented. It seems as though jazz and jazz musicians – Lionel Hampton, Louis Armstrong, Miles Davis, John Coltrane – jazz has been one of our greatest ambassadors to good will with other countries. It’s created a relationship for America which is untouchable. It seems as though the record companies have stopped recording a lot of jazz artists, the radio stations are dropping jazz formats. Jazz has never been a bad word because it’s always been a happy music and a music that makes people feel our spirit from America. Jazz has made America great. Leonard Feather, the author of the Encyclopedia of Jazz – he was an Englishman – told me that the first real American he met was Louie Armstrong. This is what people have thought over the years about jazz and the spirit of the music.

L+T: Legend has it that there was a time you were performing in New York and it started raining; then you as soon as you started “Everybody Loves The Sunshine,” it stopped raining and the sun came out.
RA: It was cloudy, man, it was a mess [laughs]. We couldn’t believe it, it was like a miracle. It was wonderful. That happened twice, it happened in Brooklyn and it also happened in Florida at a college campus. It was a wonderful feeling, it was like God was there, for sure.

L+T: Tell me about the record “We Live In Brooklyn, Baby.”
RA: “We Live In Brooklyn, Baby” is a composition written by Harry Whitaker, he was a musician that played with me that died not too long ago. He wrote it and I put it on the album. That’s a great composition. It’s a very special song and I usually play it at all my shows. Sometimes I incorporate the name of the city, I’m in.

L+T: Talk about The Roy Ayers Project?
RA: The Roy Ayers Project is the project of a young man [DJ Haylow], he’s in Oakland, California. He and a group of guys have got together, and it’s a project of many different conversations that he’s taped on video, with people like The Roots and other people that know me and know of me to talk about my music and the influence of my music. That’s what it is, he’s gonna come out with it next year. He’s been working on it and he’s pretty heavy.

L+T: Anything on your bucket list?
RA: The only I’m doing is trying to survive like everybody else. I’ve never really said that before, but it becomes a situation where you find yourself trying to survive. Even though you’ve had a lot of good times, ups and downs, you just have to continue to persevere. No matter what happens, you gotta keep playing. That’s the thing that really keeps me in a new light all the time. I play my instrument, that’s the key to the whole thing, just staying consistent.