African-Americans have come a long way in animation from the early 20th century minstrel-type figures personified by crows and singing crabs that were once so heavily marketed in mainstream TV and film. Although we have had Fat Albert, The Jackson 5, The Proud Family and most recently, The Boondocks,  you’ll be hard pressed to find an action cartoon with an all African-American cast, producers and animators chock full of adult humor that is a candid photo of our society.

After creating 2009’s cult classic film that spoofed 1970s blaxploitation films, the team of Michael Jai White, Scott Sanders, Adrian Younge and Byron Minns joined forces with The Boondocks animator and co-executive producer Carl Jones to turn the film into an adult anime that premiered on Cartoon Network’s Adult Swim on July 15th. If the debut episode was any indication, Black Dynamite has all the makings of a hit show and is a defining moment for African-Americans in animation.

“When I saw the movie I thought it was the perfect idea for an animated series,” says Carl Jones. Jones began working on the show just as The Boondocks wrapped up its thought to be last third season. However, with The Boondocks coming out of its hibernation for a fourth season, Jones had to make the decision to step away in order to focus on this new venture. “It takes so much to produce an animated series so it was impossible to continue to do both,” he says. “This was the obvious next step for me. The Boondocks was [creator] Aaron McGruder’s brainchild, while this is a more collaborative effort.”

Michael Jai White, who played the Jim Kelly/Shaft/Dolemite hybrid in the feature film, agrees that taking the blaxploitation superhero to the small screen for an animated series was a “no brainer.” White initially met Jones while lending his voice talents to The Boondocks and figured that Jones was the right man to make his vision come to fruition. “The great thing about this animated world is that there is the fantastical element now,” White says. “We can take Black Dynamite back in time, he can even go to the future, we can take him to the moon, he can fight Elvis, Amazon moon bitches, giant gorillas- whatever. It’s all open.”

Co-producer and creator Byron Minns, who reprises his role as the jive poet sidekick Bullhorn, agrees that there are infinite possibilities with the narrative that could only be achieved by turning the film into a cartoon. “The film was only able to serve one plot,” Minns explains. “Now that we have an animated series, we are able to explore their lives. Instead of dealing with ‘The Man’ we are now dealing with ‘The Mans.’”

What makes Black Dynamite unique is that an all African-American cast and crew are crafting the creative vision of the show. Rather than outsiders explaining how black comedy on African-American society should be told by black comedians, everything is all in-house and molded by those that live and breathe the black experience. “Television has become similar to what the old negro leagues used to be; it’s their network on their cable and they had to decide whether or not to let us play,” veteran actor and comedian Tommy Davidson says. The last time Davidson worked with a majority black cast headed up by a black producer was back in the ’90s on In Living Color. Davidson has since worked on numerous shows and films but admits that it is refreshing to join the Black Dynamite team. “Adult Swim picking it up means we get to see our work come to life. We’ve worked so hard in Hollywood, that broadcast really makes a difference because now we have a chance to have a show for us and by us that will be broadcast into millions of homes.”

With a number of controversial themes that can only be done by African-Americans, Davidson says that he expects that the show will get some unflattering letters suggesting that they crossed the line. But the crew anticipates that the good responses will far outweigh the bad. Just as long as they can do it their way and keep it authentic, everything will be kosher. “There’s always been a governor (on blacks in television),” comedian and actor Orlando Jones says. “There’s no freedom of speech, they pay you for what they want you to say. There’s never been a situation where someone said ‘make that character your own.’ We’ve heard that before, but Carl really lets us do our thing. We can go as far as we want.”

And go far is exactly what “Black Dynamite” does, as evidenced in the series premiere episode where the show controversially tackles the King of Pop as an abusive alien. “We thought there was no way they were going to show that episode,” Jones says as the rest of the cast break into laughter. With subsequent episodes featuring a coked out Elvis, an albino gorilla named Honky Kong, Mr. T, The Black Panters and other controversial themes including the porn industry as well as Black Dynamite staples like the “whorephanage,” one has to wonder how far the envelope will be pushed.

“I don’t mean any disrespect, but this is going to go a lot farther than anything anyone has seen before,” Jones replies when asked if Black Dynamite will go further some of the other popular and polarizing shows Adult Swim airs. Not on Family Guy, not on The Simpsons, not even on The Boondocks– not anywhere. You begin to question whether or not you should even read certain lines because there’s no way they were going to make it to air.”

As much as the show is about a Black hero facing off against the “The Man,” Orlando Jones suggests that animated series can be universally appreciated by all races, colors and creeds. “I feel good when I see a white man get his ass whooped, but it’s not a racial thing. Everyone has a boss and most of our bosses just happen to be white. So we can all share in cheering for our boss to get his ass whooped. It’s exciting!” 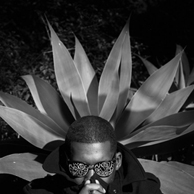 A Conversation With: Flying Lotus and Thundercat 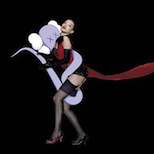 A Conversation With: KAWS and José Parlá