“Young Black relationships go through three phases: we’re friends, we’re lovers, and then we’re enemies,” Terrace Martin says while discussing his newest album, 3 Chord Fold. “But I’ve learned throughout making this record, that other cultures – white, Hispanic, Asian – go through the same things. I didn’t know that because I’ve only dated a certain type of girl. So that’s why I made the sound a bit more universal than I was originally doing. Everybody loves and everybody hurts. Not just Black, White – everybody.”

As a rapper, producer, and saxophone player, Terrace Martin has spent years collaborating with artists and bringing folks together. On 3 Chord Fold, he works his magic to tell stories of relationships past, maximizing his ability as a liaison between jazz, hip-hop, and R&B, bringing James Fauntleroy, Kendrick Lamar, Snoop Dogg, Robert Glasper, Wiz Khalifa and others together via his saxophone.

“I’m all about unity, and I feel where music is at right now is a strong place,” he continued. “I feel that Black music has never been out of style and is on it’s way to a higher plateau than it’s been in the past 10 years. Hip-hop is worldwide, just like jazz. But it’s African-American classical music.”

Here, Life+Times talks with Martin about 3 Chord Fold and his work as a collaborator. 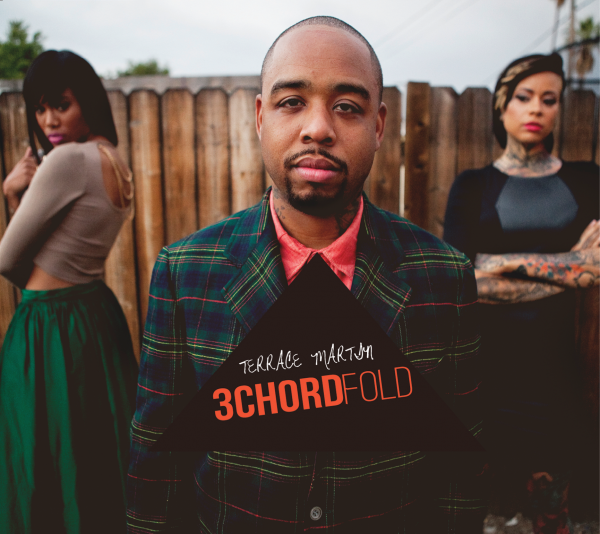 Life+Times: In everything about 3 Chord Fold, you’ve mentioned the songs coming together out of organic processes. Talk about the energy on this record and how all of the records came about so naturally.
Terrace Martin: Well, I’ve always battled with relationships throughout my whole life to start off the concept for the album. For the most part, the concept comes from in life when people talk about a three chord fold being uneasily broken. A three chord fold is a unison between God, male and female, basically saying if you have that third chord, which is God, it’s unbreakable. Then I put my own twist on it and started figuring out these different characteristics in relationships: there’s the freeloader, somebody that comes in your life and takes and takes and takes, takes your spirit; the renter, somebody who seems great at the time, but they’re also looking for somebody else to move on to; and then there’s the buyer – somebody in life with true, unconditional, agape love. And I realized that we all have been these things to somebody in life, and we’ve all encountered these things. At first, I was going to do the whole record with no words. But then, once I brought the concept to a few of my friends – Wiz, Problem, Kendrick – they all said, “Wow, that’s crazy, because I’ve been that person or had that person in my life, too.” That’s pretty much how the whole process worked, basically just conversations. It just happened one by one. I wanted to do a record that’s crossing Quincy Jones’ classic record Back On The Block and Dr. Dre’s Chronic 2001. What I mean by that is the Quincy Jones record is hip-hop, jazz and R&B all together and he produced the whole record; the Dr. Dre concept comes from him producing and rapping, too. He may not be the best rapper, I’m not the best rapper, but Dr. Dre has great songs and I feel I have great songs, too. That was the process of starting the music. Doing the music was easy because we’ve all known each other for years. For a minute, I had got off track doing a bunch of different songs. But then Punch – the President of Top Dawg Entertainment and also my manager – said, “Let’s get it back structured.” I was going through all this shit, but he really named the album. With him involved, he put all the pieces together and just let me stay creative.

L+T: 9th Wonder is credited on a lot of tracks, as well. What was the influence that he brought?
TM: 9th has been a blessing in my life. I’m a fan of Pete Rock and DJ Premier. Music comes in cycles and repeats itself, and I feel like 9th carries on the sound that we grew up on with Premier and Pete Rock. He’s such a soulful cat. He’s my big brother. I got him involved because I’m a fan of that element and 9th is a fan of soul music and ’90s music. And anybody that knows me, my favorite producer – other than Quincy Jones and Dr. Dre – is Teddy Riley. 9th is a fan of Teddy, too. Even the samples he chopped up are from that era: Jon B. “Don’t Listen,” Guy “Let’s Chill”; Tevin Campbell, “Break It Down.” So, 9th really took the time to help me with that. We fused live music and samples together just to give it a whole different thing, letting the music breath.

L+T: The single “No Right, No Wrong” with Robert Glasper and James Fauntleroy has gotten a lot of love. Talk about that record and working with Glasper. Both of you come from a similar lane.< TM: I met Robert when I was 15 years old. We met at a jazz camp in Colorado. The camp was all handpicked, who they thought were the best young jazz musicians in the United States. I was fortunate to meet Robert there and we were in the same group. He’s one of my dear friends, even without music. He was in town and we were working Black Radio 2. We were at the same studio: I was in one room working on my record, he was in another room working on Black Radio 2 and he was working on Chaka Khan’s album. I had “No Right, No Wrong” and I had the drums and some chords, but I don’t play piano nearly as good as Robert Glasper. He came over and he said, “Man, I love that record,” and I asked him if he would play on it. I told him what I was going through, the way he played on that record spoke to my spirit. What he was playing was what I was trying to tell this woman through conversation.

L+T: You have Kendrick Lamar on the record, as well, and you worked a lot on Good Kid, M.A.A.D City, which has gotten immense praise. What made him and that album so special?
TM: Working with Kendrick is an honor and a pleasure. Good Kid, M.A.A.D City was special because, one: the love that was in the room, it was a family thing. The whole TDE camp, we’re all very close. It’s rare to see an outsider come in. We don’t even go out to eat with somebody we don’t know, we don’t even talk around people we don’t know. We grew up in the LA gang element, so if we don’t know you, we’re looking at you strange. The thing that made that special was we were all on one accord. The one accord was, “We have to make sure this record touches hearts.” We weren’t caring about people hearing it, we wanted people to feel it. We all had that in common, nobody had an ulterior motive. Everybody came to the table with their best songs and best ideas, whether it was Schoolboy Q, Jay Rock, Ab-Soul, me, Sounwave. Everybody came with their best to make sure Kendrick flew. We all knew if the one flies, we all fly. A lot of cats don’t have real teams. They have entourages and crews but they don’t have real teams. We are all real friends. The only one we were getting used to was Dr. Dre. Then you got Top, Punch and Dave running the whole thing. Dave Free, President Punch and Top Dawg. Those three dudes kept it all in line. They were the bosses and they just let us focus on the music. When you have that solid crew around, can’t nobody fuck with us. The biggest thing in the room was the record. A lot of my friends have records that can’t nobody hear because you can tell then energy in the room, the disorganization. But with Hov’s new record [Magna Carta… Holy Grail], you can see Timberlake in the room, you can see food was good, top shelf liquor, you can feel that shit, you can see Pharrell. And the main goal was to make sure JAY Z flies.

L+T: How has coming from jazz helped shaped your mindset as a collaborator?
TM: Well way before I was a jazz head, I was eight, nine, ten-years-old deep into hip-hop: Marley Marl, Biz Markie, KRS-One, etc. My father and mother played jazz, and I heard it around the house, but I didn’t get turned out on jazz until I bought my first Tribe Called Quest record, The Low End Theory. There was a song on there with a Freddy Hubbard “Red Clay” sample. Those songs really influenced me. Then I went to Harlem with my father and saw him play drums, and everything just clicked. I fell in love with the saxophone and started studying it. One thing I liked, Dizzy Gillespie said it years ago when people were dissing hip-hop, “Hip-hop is the new bebop.” Cats like Dr. Dre are the Quincy Jones of hip-hop; Kendrick Lamar is the John Coltrane of hip-hop right now. I never looked at it as jazz and hip-hop – there’s either good music or bad music. If I feel we have music in common, I’m gonna collab with you. It’s what we’re supposed to do. It’s God’s gift to Earth.