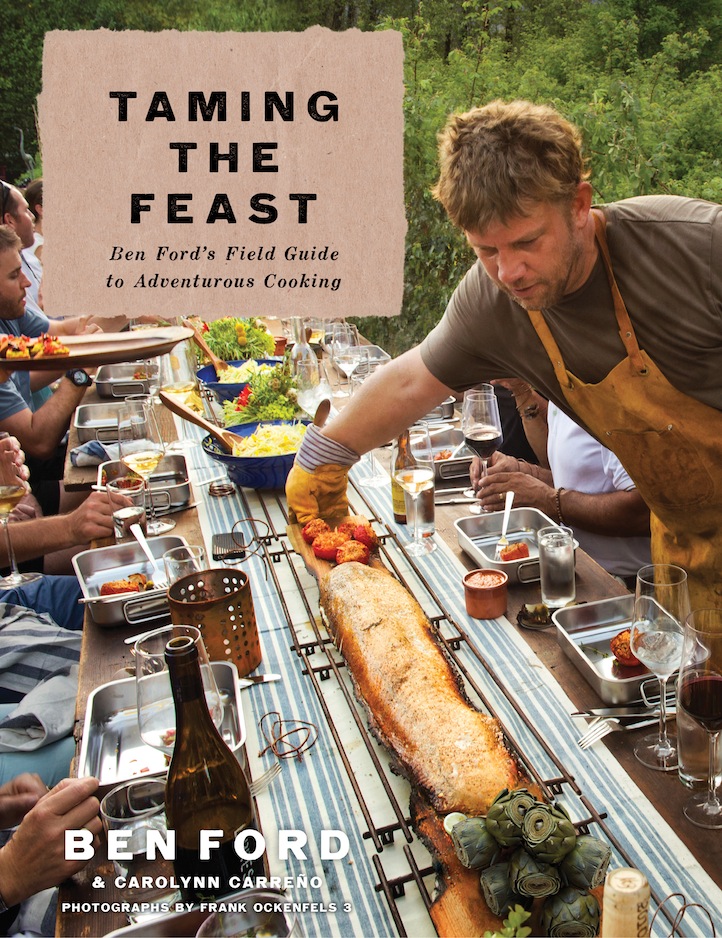 Renowned chef and restaurateur Ben Ford is the executive chef and owner of Ford’s Filling Station in Culver City,  California and an outpost at Los Angeles International Airport. His mission is centrally focused: wowing his crowds with culinary feasts of massive proportions – something that he’s mastered along the way. Fresh on the heels of his new book, aptly titled Taming The Feast, Ford gives us his field guide to adventurous cooking.

Life+Times: You’re known for wowing crowds with your handcrafted feasts of enormous proportions—a whole pig roast, paella for 80, burgers for the block. How did you get into the culinary world?
Ben Ford: I always loved cooking. My mother and her friends always involved me in their cooking projects. We also always had a garden and I think those two things were the catalyst for my passion for cooking. It’s still cooking great food with friends or a day in the garden that brings me the most pleasure. As far as the professional kitchen, when I turned twenty I headed to San Francisco in search of something I felt passionate about. I loved my hometown of Los Angeles but we had maybe five or six serious restaurants at the time and were still developing that culture. San Francisco had it, so I packed up the car with some of my mother’s knives and a couple Jacques Pepin video tapes and headed north. I basically did it the old fashioned way. I knocked on back doors. My very first job was at a place in North Beach called RAF. It didn’t last long, maybe a year, before the opportunity at Chez Panisse presented itself.

L+T: When did you know that your “passion” was a “skill” – one that you could transition into a profession?
BF: I don’t think it worked that way for me. I had a passion for cooking and later the lifestyle that went along with working in restaurants. I was young and having fun. When I was learning to cook you only had three culinary school options in the country. Cooking school and the Food Network weren’t a kid’s introduction to the profession. It was mysterious and also a craft that for the most part was being passed down by word of mouth and through apprentice of some sort. So my point is it took me years, maybe six or seven years before I thought I had a serious future in it. The prior years were just spent with my head down in learning mode. I think once I gave in to my craft and had enough foundations that I could cook successfully, I was unbridled and free to create responsibly. I think once I started to create my own food, the responses to my cooking were extremely positive. I think that was the moment when I became a real chef, when my name was on it and the people reacted positively. At that point, being a chef was my career profession. 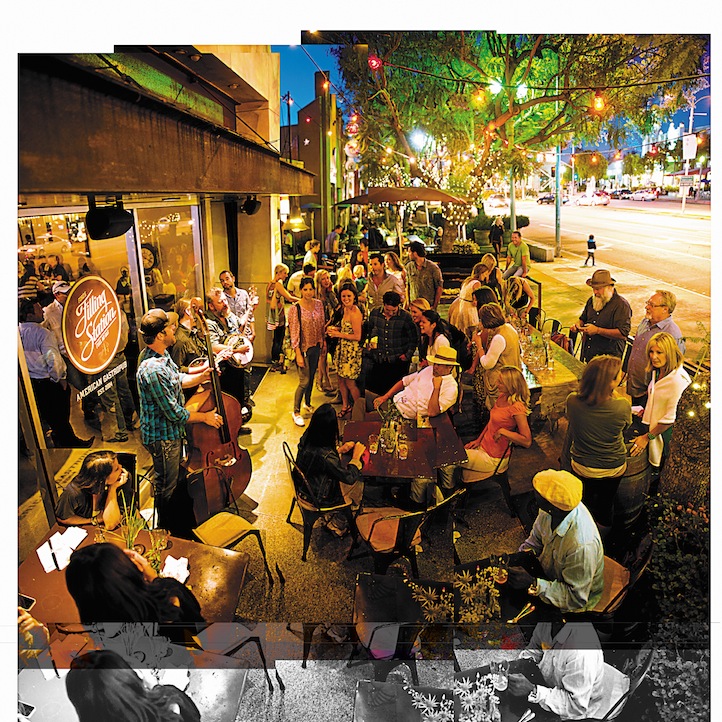 L+T: It’s perfectly timed that your new book TAMING THE FEAST showcases your secrets for nine jaw-dropping feasts for the adventurous home cook and DIY enthusiast. What is it about large-scale cooking that you’re so drawn to?
BF: I love a feast and the loss of inhibition that comes with it. It’s kind of magical when friends get together and have a little too much wine and food. It’s that trifecta – friends, food and wine – that have been responsible for the majority of my favorite experiences. Not only at the table, but also in life. I also like the mechanics of cooking for a large group. You can either have fun with it or not. Some of these techniques involve some preparation. They also involve a little time leading up to the feast itself, but the efforts vs the amount of happy people that you can feed off something like a cinder block pit is very rewarding and the truth is, once you have all this food cooked you can join the party, if you haven’t already. 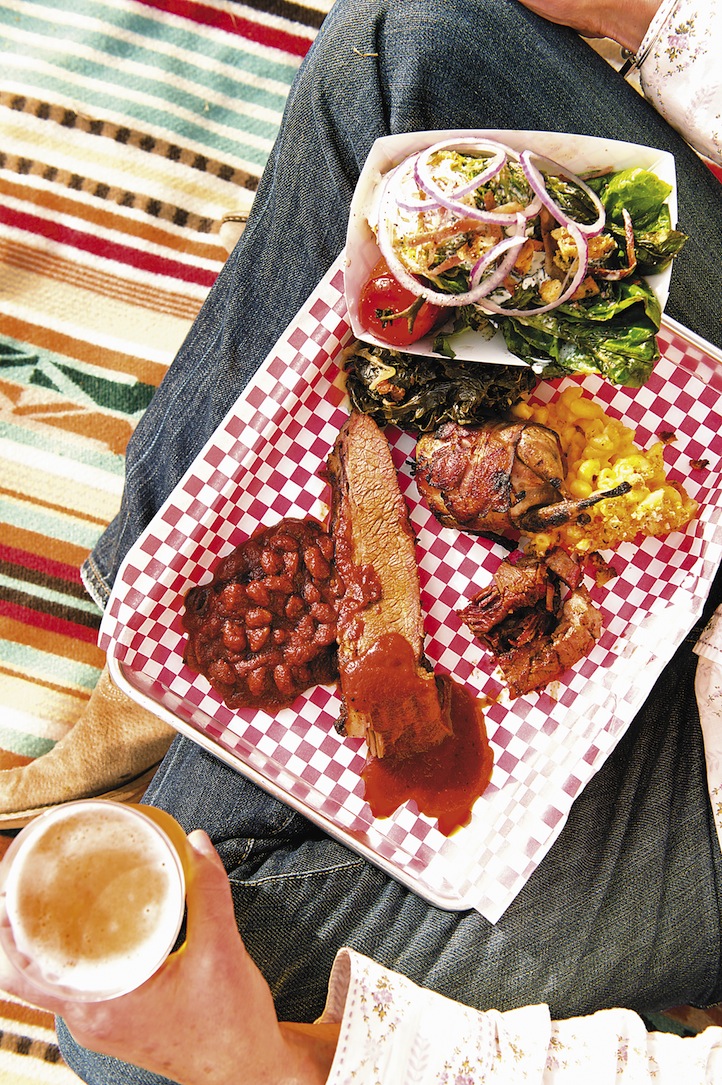 L+T: What are some of the recipes that we can find in this book? What was the editing process like?
BF: For those looking for a challenge, each chapter has a big recipe a timeline—and in some cases a DYI cooking contraption to help pull off the job – to help guide the user step-by-step through the process of throwing a big feast. The Clambake feast for example has a feast recipe that utilizes an oak barrel as a cooking vessel. It’s large enough to make a seafood feast for 40-50 people. It sounds grand, but each feast is quickly tamed and made more approachable and scaled to a comfortable eight portions, the minimum I feel is required for a feast. In the case of the Clambake I offer a recipe alternative to recreate the same meal using a kettle grill. It’s simple, approachable, a whole lot of fun to cook and has delicious results. I think some of my favorite recipes are some of the creative leftover recipes that help turn yesterday’s the excess of a feast into something new and wonderful. These opportunistic recipes, like the Jambalaya created with the leftover Paella feast, are playful and delicious. The editing process was a learning experience and a confirmation of my vision. There aren’t a lot of books like this out there and so we were creating cooking concepts for the first time. There are things in this book that have never been done before and it was very important that people could work with this book in a variety of ways. The idea of it being a manual encapsulates it all.

L+T: You’re the executive chef and owner of Ford’s Filling Station in Culver City, and an outpost at Los Angeles International Airport. For those who are unfamiliar, can you tell us a little bit about your restaurant?
BF: It’s a very crafty and connected restaurant. It’s community-centric and focuses on exciting, seasonal, regional American comfort food. The pub-like atmosphere is designed to be casual, open and familiar. The room is full of artifacts from my family’s life; personal artifacts and books are on the shelves, family photos and nostalgic poster art dot the walls and my wife Emily’s music plays on the stereo. It’s a soulful space. As for the LAX location we came with the intent of changing the traveler’s perception of “airport food”. This location was built with the savvy traveler community in mind and is fast paced restaurant fuses my expertise, passion and love of great food. The Ford’s Filling Station-LAX experience features fresh, seasonal ingredients with a strong value in cooking skills that promote the idea that simple food done well is best. The commitment and creativity that comes from an authentic brand like Ford’s Filling Station has led to an experience like no other found beyond the security gates of Americas airports and we are very proud of it. We will have a third location opening this summer in JW Marriott at LA Live. This location will take a modern approach to creating locally influenced dishes that embrace the foods of Southern California and the people who grow it. A community restaurant, the downtown location appeals to a broad range of travelers as well as the surrounding community. 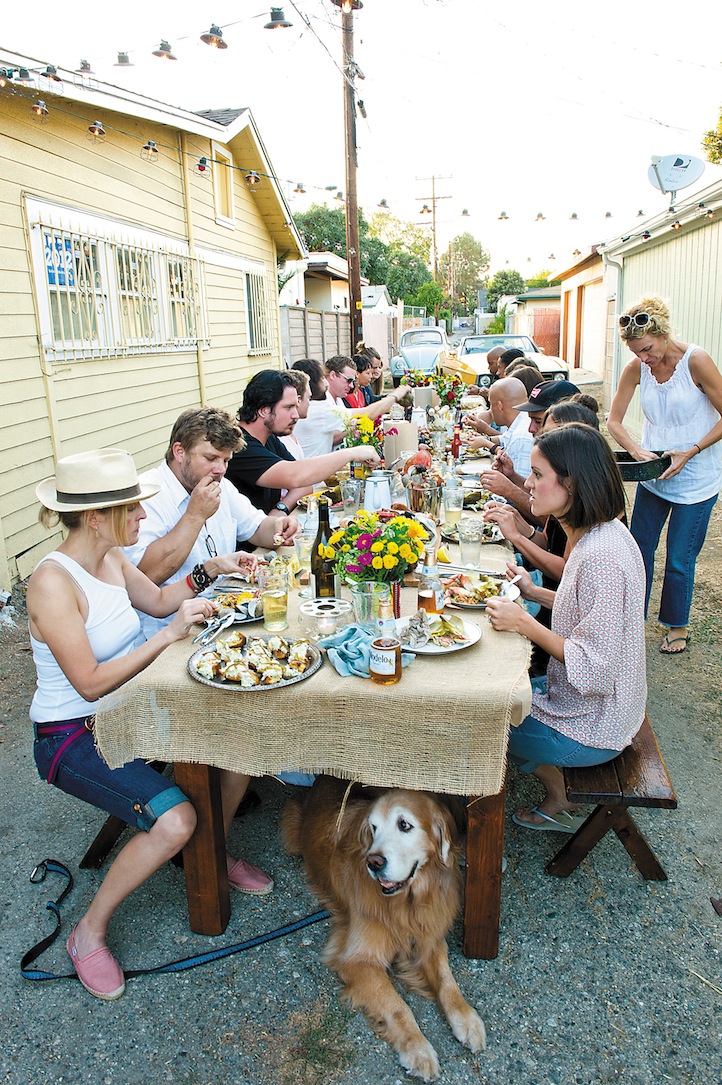 L+T: Before you launched your own venture, you worked at Chez Panisse, Berkeley, and Campanile, Los Angeles. What did you learn from these experiences?
BF: I learned what you would expect. Both restaurants were operated at the highest level of integrity. The ingredients required great care and respect. Both kitchens had wonderful relationships with the farmers and there was always a connection to the food. Of course I learned a lot about food and production work, but I did a lot of growing up in those kitchens and it was their culture that I try to reproduce in my own kitchens.

L+T: What do you want people to take away from this book?
BF: Hopefully, a renewed sense of adventure and the seeds that feed passionate cooking. I want people to feel the excitement of planning a feast and the reward that comes with it. I want to stir the imagination in a way cookbooks haven’t in the past, by evoking the more primal instincts of cooking a whole beast, building something with your own hands with a big payoff that will keep everyone talking about it for years by creating an experience.