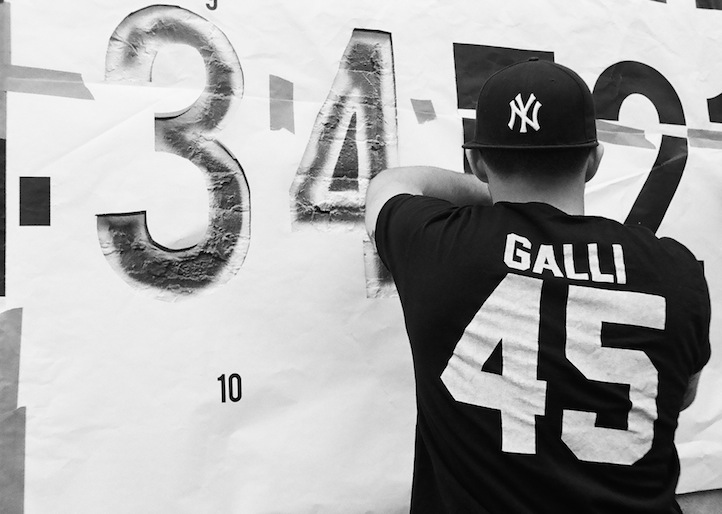 Roman Grandinetti, a native New Yorker, is the Founder and Creative Director of CNNCTD+, a development group at the nexus of street and popular culture. His first major project with CNNCTD+, an installation dubbed CNNCTD+100, was exhibited at the New Museum and received critical acclaim. CNNCTD+ has continued to innovate and grow, expanding its creative prowess to include audio and visual projects with artists like Pharrell Williams, Spike Lee and Mario Sorrenti, geo-tagging art murals for the likes of Bob Dylan and Big Sean; installations at SCOPE Art Show (Miami and New York) in partnership with Google and Casio; and teaming up with global fashion brands including Kitsuné and WeSC. Now, he’s collaborated with GAP and Vice on two painted murals throughout the city.

Life+Times: You’re known for your street art. What were you like as a child? Were you an artistic kid?
Roman Grandinetti: Interesting to be called a “street artist,” but I guess it fits. I think like anything else a name is earned. A lot of people put labels on themselves because they want or need to be someone or something. I’m just doing what I know how to do and hope for the best. As a kid, I drew here and there starting with my favorite cartoons and built a ton of shit with Lego. Best part of it all was I started getting pulled out of class in first or second grade for art projects. I went to P.S. 101 in Brooklyn – a teacher there started my art career right before graduation and gave me a pretty dope design set. I got myself into Art and Design High School, but it ultimately turned me off to traditional art.

Life+Times: You’ve recently been commissioned by Gap to create two “walls”in downtown NYC as part of Gap’s global “Art of Blue” campaign. How did this project come about?
RG: I’d been in discussions with Vice about collaborating and “Art Of Blue,” a partnership between Gap and Vice, seemed like a perfect launching point. Fast forward a few weeks and the designs were life size.

Life+Times: You chose two locations – one on Kenmare Street and the other on Ludlow Street to help execute your vision. What is it about these two locations that appealed to you? Why did these locations make sense?
RG: The mural locations are local stops downtown and also part of the CNNCTD+ wheelhouse. I curate those walls every so often in collaboration with artists and brands including Bob Dylan, Big Sean, WeSC, A$AP Fergm and FreeArts NYC over this past year. The Ludlow location has such tangible connection to the street that it feels alive in a weird way. The Kenmare wall is so different from the Ludlow space, it’s massive – almost a full block wide – and it feels ingrained in the cityscape. 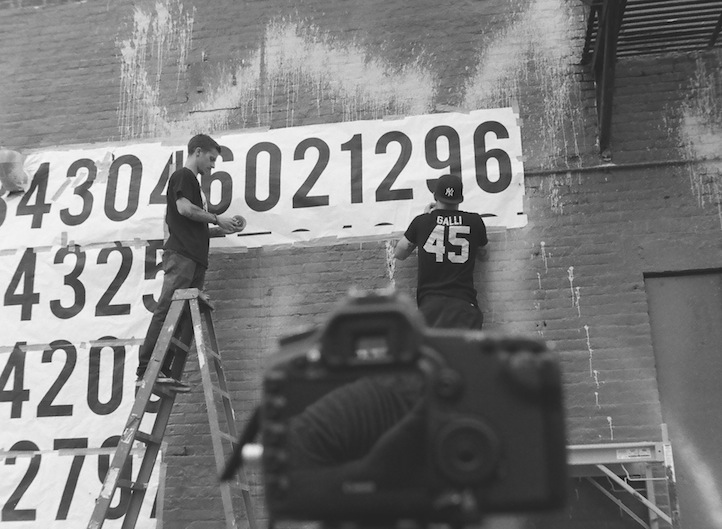 Life+Times: You’ve said that both murals depict this story of simultaneous order and disorder. Can you tell me a little bit more about this? What it means to you?
RG: My concept for the project was organized confusion in some sense. For artists, the SoHo streets have always been a canvas to express our thoughts, feelings, and desires. From Keith Haring to KAWS to every other kid posting stickers, everything that goes up is expression, something we throw out to the streets without expecting anything back in return. I decided to convey that sporadic but meaningful expression by throwing and spraying paint via fire extinguisher. Atop that I overlaid a series of phone numbers that correspond with NYC institutions that support the underground scene, knowingly or unknowingly. The numbers include the New Museum, Galli Restaurant (which allows artists to re-design its entrance) and the local Kinko’s that prints stencils. I tried to tell the story of what it’s really like to be a street-level creative in this city.

Life+Times: You’re born and raised in Brooklyn. Over the years, how have you seen New York change over the years – from a creative perspective. How has this change influenced your art?
RG: Brooklyn, Brooklyn, Brooklyn. As close as Brooklyn is to Manhattan, to some it’s still very far. New York has changed in the last 10 years. The downtown community used to be a sub-culture, and now we’re becoming face front. To this day I sit on Prince and Broadway outside of Armani Exchange – years ago I did it to show off my clothes or stand outside of Bombing the System to see who was going to hit the phone booth. I still linger around both locations to witness the interesting cross-section of high and low. I think our generation is molded differently. We’re offspring of the originators, we re-imagine, re-invent and re-mix. We pull influence from a number of different directions, art, food, fashion, music, the street and tie it into something new. But that’s complicated by today’s digital focus. Instagram is a huge, huge influence on our culture. It’s all in your face flash with no build up and a life span of seconds. Technology is powerful, our generation’s magic wand – we use it to print legends overnight, to fake it until we make it. Substance is still the goal though, if we can create it. 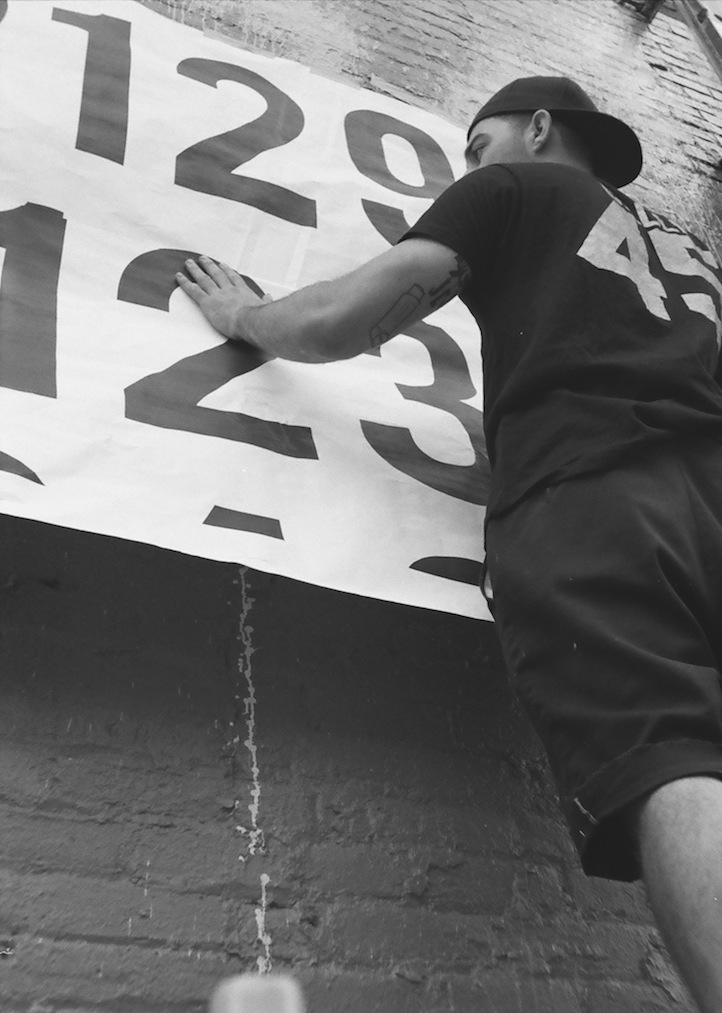 Life+Times: What other projects are you working on? What’s coming down the pipe?
RG: I’ve learned a lot in the past year. Starting as an unorganized magazine to designing a campaign that circled the globe has opened my eyes a great deal. We are getting a bit more organized, learning how to say “no,” and growing the CNNCTD+ family. That’s the most important thing right now. Aside from that DJ’ing regularly keeps me up late but likewise on my toes, in touch with the music community and it’s audience. In the near future, CNNCTD+ will be refining its miniature publication called The Circular, looking ahead to our Art Basel Integration, collaborating with recording artists and fashion labels that we can’t name yet creating content that drives art into the street and tells a story. 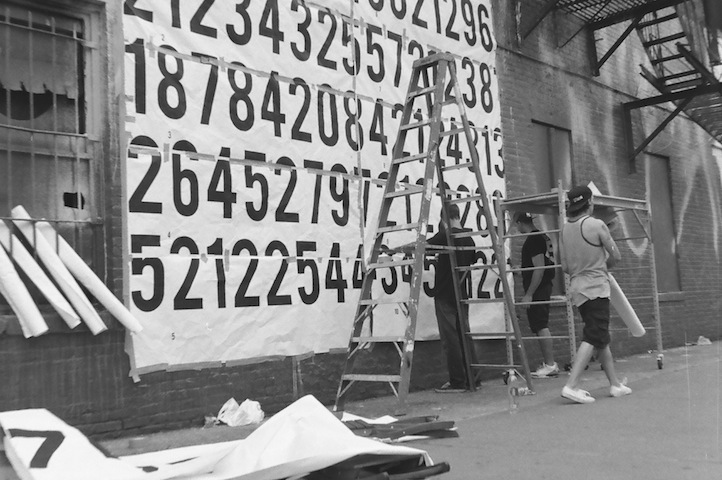