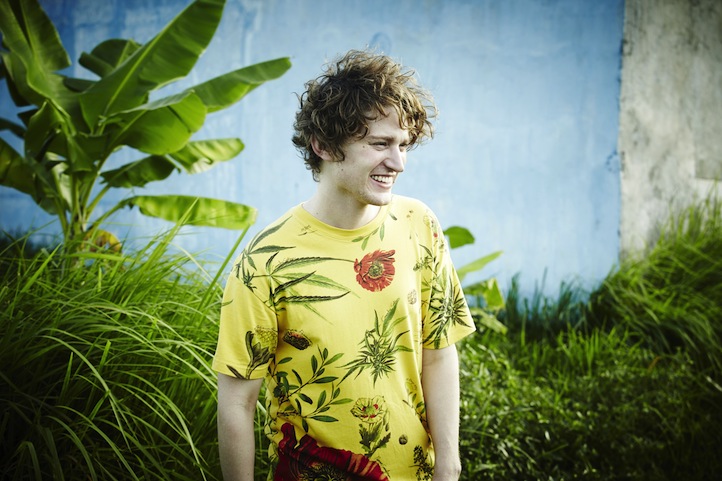 Build ups to drops, 150 BPM trap tempos, and retro ‘90s house rhythms – these are the trends that inundate the current electronic dance music scene. The redundancy in sounds is comparable to eating the same dish for lunch everyday – the taste is there, but the excitement is gone. A small group of producers are contributing their distinct creativity to help bring zest back into electronic music. Included in this cluster of artists is Australian DJ-producer Sam Poggioli (Sampology). His performances are comprised of alluring visuals and live productions – a buzzworthy experience versus your ordinary live DJ set. Sam’s mixed media act highlights his chameleon-like ability to blend hip hop with EDM through turntablism and DAW equipment. Here, Sam gives us a glimpse into the methodology behind his live sets and gives us an in-depth synopsis of the definition of a DJ.

Life + Times: Based off of some of the videos I’ve seen of your live sets in Australia and in the States – I’ve come to the conclusion that there really aren’t any limits for a DJ-producer. Would you not agree?
Sampology: I agree, yeah. For sure! I’m drawn to stuff where there are no rules – to make up your own stuff.

L+T: What initially intrigued you the most about the DJ lifestyle?
S: To me, it was a few things at the time. There was an Australian act called The Avalanches that released an album called Since I Left You. It was kind of one of those things that a lot of people could relate to where they get an album in high school and bump it all summer and listen to it about fifty times. It was so many levels to the album. Also, it kind of gave me a push and a desire to write and do my own thing like that. That album represented to me hip hop in a way. The thing that I love about hip hop – not so much from a genre point of view, just from a sensibility point of view in terms of taking a whole bunch of concepts and content and reapplying it, juxtaposing it and reworking it – is something completely new. Whether that be hip hop directly with you DJing with a whole bunch of different music and flipping it or completely other genres. At that time I couldn’t explain it how I’m explaining it now. I didn’t really know exactly what it was. I was drawn to basically taking things that interested me from all different kinds of areas in music professionally and then flipping it my own way. That’s still what draws me to it and interests me.

L+T: That’s actually one of my favorite albums. I love The Avalanches. The visual aspect of your set is always so cohesive with the tracks you actually play. How do you come up with what the visual component of what will be in junction with the track that you play?
S: The best thing about it like I said before – there are no rules. Sometimes I’ll hear pieces of music and for no reason whatsoever some visual will pop into my head that I’ve seen recently in a movie or on a TV show, the Internet, or even just a scene that I don’t know exists and I’ll try to find it. Other times I’ll be watching something on my laptop or on TV or just see a picture or something in a magazine and think, ‘It would be rad to juxtapose that image or that movie image with this piece of music.’ There’s no rules of it. My favorite bits of the show are found when I’m sleep deprived really late at night with music. It’s kind of like I’m almost tripping on my own lack of sleep or something. I enjoy coming out with cool combinations like that.

L+T: So when you’re playing live, what if the crowd isn’t feeling a track? How are you able to transition it in a way that still makes sense and won’t disrupt what you already had in mind for the visual part of it?
S: I don’t know. I’m a super chill person socially. If there’s a group of people, I’m not the dominate one that’s like, ‘Hey guys! Let’s do this kind of thing.’ That’s really not me. I like to take the aggressive – not the sound that I’m using – more in terms of before people can get bored or think about stuff, especially if I’m presenting them with new stuff, new music that they might not have heard before. I feel like before they’ve got a chance to overly dissect it or maybe get bored I’ve kind of hit them with something new and kind of moved them onto something else. Hip hop DJs inspired me when I was getting into it in terms of playing the first chorus and moving on to the next track. I’m not saying that’s what I specifically do, but that kind of attitude – hitting people with something new before they get bored. I’m not sure if that answers your question, but I find that that helps combat that and keep the party moving.

L+T: No, that’s exactly what I was wondering about. That’s also what I admire about what you do. You tie in old school DJ technique, turntablism, with some of the new age technology. What helps prevent you from caving in to some of the trends that’s currently occurring within dance music and even hip hop to a certain extent? There is a trend to stick to safety versus stepping out and doing your own thing. What helps you to be Sam?
S: I tend to combat it by not thinking about anything in terms of trends. To me, I am such a fan of the history of it. I worked in a record store for four years and that was such an invaluable experience to kind of learn about genres that I wasn’t immersed in so I could sell it to people coming into the store – whether that be a new record coming out or the secondhand stuff. I think it’s super important to stay open. To me, that’s not even about being trendy or anything like that. I guess to combat the trendiness issue is to not really think about it. This isn’t, like, super related to the question, but I think a lot of times lately I’ve been pondering that if new music pops into your mind of ‘Is this just a trendy thing?’ – look at examples in the past, you know? When Wu-Tang first came out, what were the people at that time saying about them? When De La Soul were first coming out…what were people saying at that time? Were they basically like, “Fuck this trendy shit. I’m not down with that?” Obviously in 20 years’ time, time has reflected well on that. I like thinking about all those things, but I guess the short answer is I don’t really get hung up on conversations about trendiness that people may have in terms of judgment. I do think it’s important to stay open.

L+T: That’s a valid point – particularly about what people were potentially saying about different predecessors of hip hop. Even though we’re in 2013, a lot of the inspiration that you as a producer and other artists have are inspired by a lot of the things that have been created before. You recently did a track with DJ Butcher and Beenie Man. How was that?
S: Really good. It was an unexpected pleasure because it was just a track that we had a sample floating around from a 1997 Beenie Man record and we reworked it. Towards the end of the process when I was kind of mixing it, I was talking to Butcher and saying, ‘This is a really cool track. I want to get it mastered properly, so it sonically can be as great as it can be when people hear it in the club or in their headphones.’ My manager actually reached out to Beenie Man’s management and sent them the track. They ended up liking it so much. At the end of the day, they said let’s clear the sample and you guys can put it out if you want. The initial plan wasn’t for it to come out officially, but it did. The response has been really cool.

L+T: Last year you released your debut album. What’s next?
S: I’ve got a stack of music and it’s just in that process of compiling it all together – like, what format it will come out in. It’s quite a lot of music, yeah.

L+T: For my last question, I ask every DJ and producer the following: Do you think a DJ is a musician?
S: Well, it depends on if they’re a DJ or producer I guess. I’m a massive fan of just DJs. When I first just started going into the clubs and venues where DJs were playing a selection and had their own voice, the things they were using were other people’s music. I’m a huge fan of that. I don’t see it around as much as I used to when I first started being exposed to that kind of thing, but I will always be a huge fan of DJs that speak for other people’s records with their own voice. At the same time, producers obviously play such a huge part in representing their own sound and don’t place any barriers sonically in pushing things forward. I don’t know. It’s both to me. I think at the end of the day I’m just a fan of people who when you listen to them DJ or listen to the music that they make whether they’re a DJ or producer that they have their own voice…and I’m drawn to it kind of thing. What do you usually get?

L+T: Some artists flat out say “no.” Other artists get insulted and think I’m trying to call them out on a specific issue. It’s just food for thought! I’ve received some “I don’t know” and “yes” responses too. Then, I’ve had some state a response similar to yours. I’ve been asking this final question for almost a year and I never get the same explanation.
S: To me – adding on to your question – like I said before I’m a huge fan of DJs. I feel like the perception of what the DJ does has changed so much. I’m not specifically mad at that because it’s cool that things change. At the end of the day, I think that to be a DJ you have to focus on being as great a DJ that you can. It’s more refreshing nowadays to be a DJ – you need to be a producer as well. I think you’ll get way further in the industry if you do become a producer and make your own music.