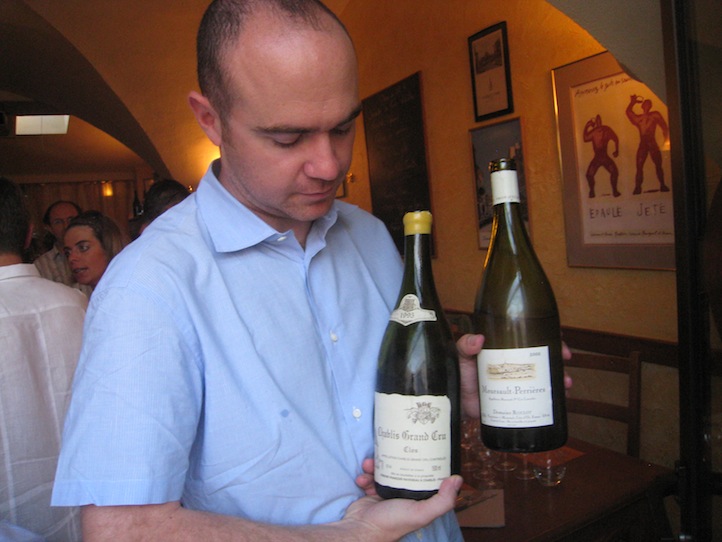 Robert Bohr, is a partner in Grand Cru Wine Consulting, where he helps his clients build personal private collections. He travels to France and Italy a dozen times a year, buying from centuries old vineyards and cultivating his own. His client list includes moguls and superstars but is private as his method of building a collection with them is utterly personal. As a private sommelier, he takes his new clients on a few test drives at home dinner parties, getting to know their palette and lifestyle. Here, he shares some secrets of his intimidating trade, and a few bottles for any budget.

Life+Times: When you start working with a new client how do you begin? Do you interview them about their tastes? Or are there staples in every collection?
Robert Bohr: That’s an excellent question because a lot of people don’t realize how personal a relationship it will become at the beginning. Yes there are some staples, there are some benchmark definitive great wines that anyone would love and appreciate if they love wine. But not every one has the same palette. With a recent client we began with me bringing six different types of wine in two different styles of each of the wines. I’d brought the same wine in opposite styles. It’s not a question of quality, because they’re both from the top producers. From there I began to ask questions about what he responded to; the earthier, leaner, more powerful side, or the richer, fruitier, riper, more voluptuous side of this little hill in the Rhone Valley in France. There are no wrong answers, it just gives me a diagnostic on how to gauge my client’s taste. You can’t just do it in one night, over the course of a few dinners a pattern develops and that provides me a template of his taste.

L+T: Give me examples of the kinds of wines you’d present at that first serving.
RB: Burgundy, both white and red. If it’s white it’s Chardonnay, if it’s red it’s Pinot Noir. Which makes it really simple, but within this very complex region there are a lot of different styles of producers. For a white I’d serve a wine that’s mineral and clean and aromatic and lively and serve that same quality level with a white that’s richer, oakier, more intense and serve them side by side and say which do you prefer. I’d do the same with a Nebbiolo from the Piedmont region. I’d also give a choice between a new-style producer and a more traditional style producer. I don’t make comments, or editorialize when I present the wines, I just put them in front of the client and ask, “Which do you like the best between these two wines?” I’d do the same with Syrah which is from Northern Rhone. If I get a sense my client likes white, I’d present a Riesling because it’s such a universally loved food wine and there are a myriad styles of it. And finally I’d do something Cabernet based, there’s the great Cabernet dominated Bordeaux and there’s the monster Cabernets from Napa Valley, California.

L+T: How much do you need to know about geology? Or the “terra” of a region? Were you an earth science kid?
RB: I was definitely a science kid. I loved  chemistry and physics when I was a kid. That’s kind of a post-graduate level of knowledge. Most collectors don’t need to know that. It helps to have a basic knowledge of a region. For example, Chablis is a great white burgundy, a chardonnay, but it’s a separate region whose subsoil is oyster shells and that subsoil creates a totally different aromatic than other white Burgundys.

L+T: Do you travel to Europe often?
RB: I’m there a lot. I’m in France and Italy at least every six weeks. I just helped buy a wine estate in Burgundy and my business partner has a wine estate in Italy, so I’m there quite frequently.

L+T: What was your relationship to wine before you became a professional?
RB: It’s hard to say. I’ve been in the restaurant business all of my adolescent and adult life.

L+T: Did you have the kind of liberal parents who let you drink wine with dinner when you were a teenager?
RB: Ironically, my parents don’t drink wine, but my grandparents did, yes, they drank wine at every meal. So when I was young, I’d have the three ounce, half-full glass at Thanksgiving and Easter and in high school I’d sneak with my friends and drink bad, cheap jug wine.

L+T: If someone came to you with $50 and they really wanted to impress their in-laws and they’ve no idea what they like; red, white…what would you recommend?
RB: It’s hard for me not to show my prejudice and say Burgundy’s the greatest wine in the world, because it is, but the reason I’m going to say Burgundy is because it’s a hedge; people who like high tone, light bodied white wine, will like Burgundy. Likewise, people who like Pinot Noir will like it. It’s the most versatile, friendly wine, whether you’re having ham or turkey, it just goes. Specifically if you can find Chambolle-Musigny Domaine Roumier, it’ll certainly impress.

L+T: Conversely, if someone came to you with an almost limitless budget, wanting to build their collection, to send you to auction, tell me three front of the vault show off wines you’d select for them.
RB: Barolo Riserva ‘Monfortino’ Giacomo Conterno which I believe is the greatest wine in Italy, Hermitage Domaine Jean-Louis Chave, he’s been making wine since the 15th century, it’s history and earth and personality and finally I’d add a great burgundy, it’s cliche to say it, but if you have the resources La Tache Domaine de la Romanee-Conti.

L+T: What’s the most romantic wine, the one you suggest to nervous men with an engagement ring in their pocket?
RB: Champagne is always the way to go for a proposal, I recommend Dom Perignon Rose, ideally 1996.