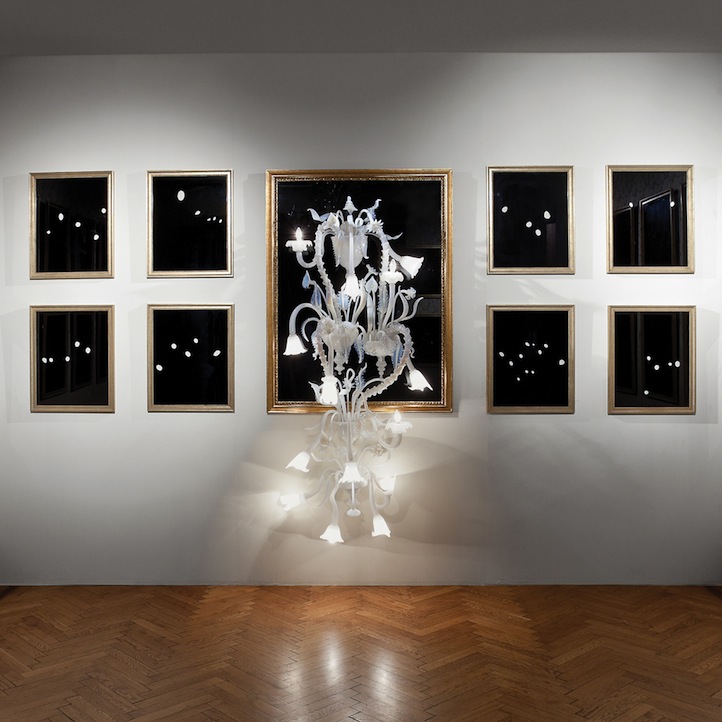 Fred Wilson describes his process as tabula rasa — he makes timely works of art based on his and perceptions and experiences. Born in the Bronx in 1954, Wilson has devoted much of his career to reimagining how audiences experience art in museums and cultural institutions around the world. Among his many accolades, Wilson won the John D. and Catherine T. MacArthur Foundation “Genius” Grant in 1999. Environment is everything to Wilson, who created the powerful narrative “Mining the Museum: An Installation By Fred Wilson” in 1992 in which he transformed the Maryland Historical Society’s collection into a provocative commentary on the history of slavery in America. Representing the U.S. at the 2003 Venice Biennale, he began his exploration of race and the nuances of African identity in Venice, a city known for its glass making tradition. As part of the exhibition, Wilson made a series of Murano glass chandeliers. He has continued to make work about Venice including the 2011 installation “Sala Longhi.” The work is coming to New York for display in “Venice Suite: Sala Longhi and Related Works,” a solo exhibition at the Pace Gallery that opens on March 17. Wilson is the 2012 honoree for the Savannah College of Art and Design (SCAD)’s deFINE ART series. He spoke to Life + Times about his new installation at the SCAD Museum of Art entitled “Life’s Link,” culled from the Walter O. Evans Collections of African American Art, on view through June 3. His work is also on display in an exhibition at Rena Bransten Gallery in San Francisco through March 31.

Life+Times: What were your intentions for “Life’s Link?”
Fred Wilson: I always come to a project tabula rasa. I don’t start with preconceived notions about what I’m going to do. It’s not a comfortable place to be in. I don’t want to come to a new place with all my New York ideas. I try to be a sponge for the place I’m in and I try talking to people and see what I can see in the places and the people and hopefully what comes out is not about me, but my view of the situation, but also something that makes sense to people who are actually going to see the exhibition, rather than the people in New York City. It’s about the place I’m in to some degree. In Savannah, this was an enticing project. This was the first time I’ve actually worked with a private collection. He had a huge collection of documents. [Walter O. Evans] has the largest collection of Frederick Douglass papers in private hands, a huge amount of letters by James Baldwin and other luminaries; Malcolm X and others. It was just amazing. I took a couple weeks at his home. At the end he said I’d seen one percent of his collection. My project is not to see everything. Sometimes it can be the case that I can’t see the entire collection, because it’s just too huge. It’s a bit of a meandering process when I’m working with a collection. What I see is what I see. Everything that I do is about that moment at that time. From all of his documents and art works I created this exhibition. It’s called “Life’s Link” a title from a drawing from Robert Duncanson, the famous landscape painter in the 1870s. I was really taken by this drawing that’s very uncharacteristic of his work, but also because that phrase really summed up what the project has turned out to be — the linking between art and literature and art and biography, the link between various people throughout history. It’s about the dialogue between people, and how life’s link is a link between ourselves and history. Someone said to me, it’s kind of like when you overhear a conversation, and you get a bit of it and then you mix and match the rest of it. I try to do that in all my projects. The works are not about answers. They are about questions, and making you want to know more. Sometimes looking at documents in different way is like looking at art and how does that affect you? Not specifically necessarily understanding the topic, but what leads you to more thoughts. 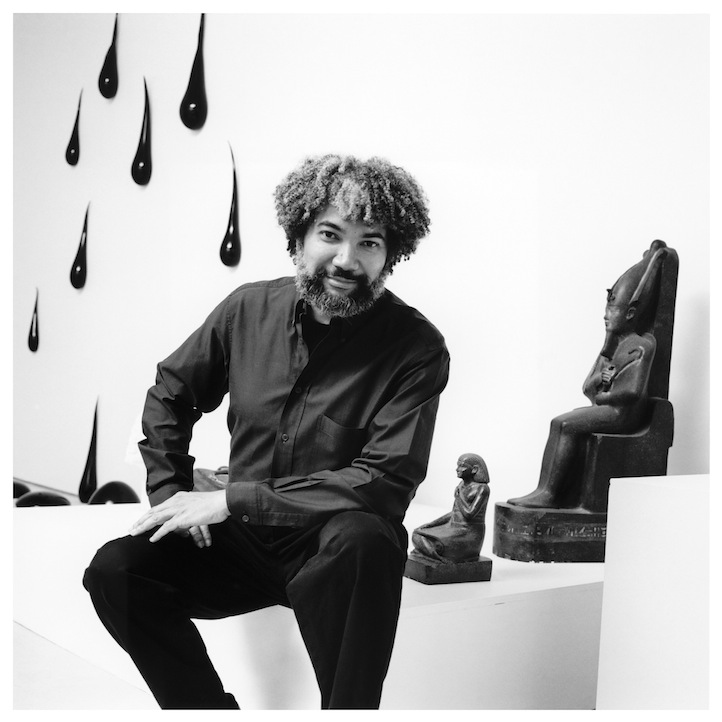 Life+Times: Do you feel your curatorial background feeds your process in your work?
FW: No. What I do isn’t really curated. I curated years ago. I’m meta curating. I’m mimicking curating. Curating has particular systems and ways of doing things and I don’t necessarily follow those formulas anymore. With an institution I have to work with a large number of people. They have certain ways of working with a museum display; I can’t break something. It keeps my inspiration to do things. In my studio, I don’t have those kinds of restraints. In the studio I’m not responding to a given situation. I’m perhaps thinking about a particular moment in time or particular objects, but I’m not bound to that. It’s whatever I feel at that moment. I get satiated from doing both. Having both is great.

L+T: How do you think about the future?
FW: Planning my projects is a whole other thing. Museums plan several years in advance. Sometimes when it comes around, when it gets closer, sometime it happens, sometimes they don’t. I do have certain ideas. Museum projects are not tied to a particular thing I’m thinking about. They’re new, right at the moment. There have been a couple situations where they were stopped because of the recession. I’m working on a previous experience in another country, and see the opportunity to explore it further in an American museum. But also in my personal practice I have so many ideas, my ideas and projects stretch into my future. I just have to get to them. Sometimes the ideas fall by the way side because they are no longer interesting to me by the time I have the time do to them, but generally speaking, my interests vary hugely. I think now I probably think of things more complexly. Most artists realize if they look at their career, they come back to the same themes. It’s all based on very deep experiences and emotions that are always with you. They just get produced and created in different ways as you mature and get older. People are sometime surprised how I can have fully formed ideas. But if you seen me around, I’ve spent a long time waiting before I decide to do them. Such is the case with the Smithsonian or the Museum of African American Arts. I have some ideas that relate to what I did at a museum in Sweden that I would like to explore further. I’m looking forward to getting to that.

L+T: What do you think about the accessibility of art to new audiences?
FW: I’m a big proponent of that idea. I’ve come from a family of teachers. My grandmother is a teacher. My mother is a teacher. I lean towards passing on information in my own way. What I’m thinking about is complex and idiosyncratic to me. They are things that come and go in what I do that people can connect to. I’m working with subjects that are often familiar, be it race, culture, or popular culture. There’s also an element of what I do that relates to the emotional side of things that —alienation, isolation, denial, or loneliness, and there’s also humor in the work. Combining these things is perfectly natural to me. I think people sometimes connect to a subject matter. I’m not trying to educate anybody. It is not for an audience. I believe that art as a vehicle is the best way to communicate to the world. I’m particularly interested in not necessarily making simplistic illustration of an idea, that whatever I’m feeling or thinking is as clear as I can make it without knowing who is going to see it. If it makes me happy and I can have an emotional connection to it, I trust that perhaps others will. I’m interested in notions of beauty, which I think connect with the museum project. There is this aspect of beauty within the display, so I try to use that to create meaning. Some of the work that comes out of my studio uses beauty to talk about other things. Beauty can be really seductive and people can relate to that. I try to infuse it with other kind of meanings, so if you want to you see the richer, beautiful side. These two things enhance each other in the works.