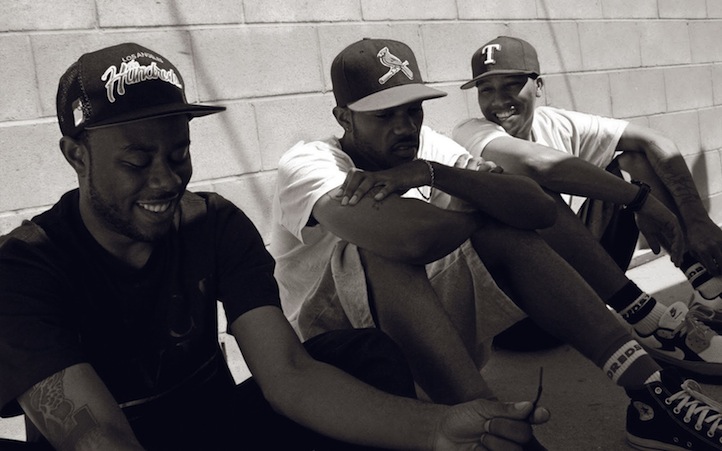 Pac Div have been through pretty much every situation in the music industry ranging from struggling to being heard to finally inking with a major to dealing with the roller coaster ride of being on a major and parting ways for indie endeavors. Through it all, the trio feel that general public may be familiar with Like, Mibbs and BeYoung but still doesn’t know exactly who Gabe, Mike and Bryan are. With that comes the recent release of their new album GMB that gives insight on the individuals and their lives while setting the stage for the group to branch out with solo projects. Mibbs and BeYoung speak to Life+Times about their past, present and future.

Life+Times: Going back to the Universal situation, what went wrong?
Mibbs: When we signed with Universal, we were the first of the new generation of viral west coast artists. We had our own formula of doing things. I guess they thought our following was bigger than it was. We always stuck to our formula for making music but they wanted us to crack the top 40. We were fighting the uphill battle while other internet artists like Drake and Kid Cudi were establishing themselves online. We didn’t have the radio push we thought we deserved either.

L+T: It sounds like you were the guinea pigs of major labels signing artists that have established followings on the internet. Now that the labels have mastered how to market the internet artist, do you think you guys would have fared better if you signed later?
Mibbs: There’s no doubt that if we signed two or three years later we would have fared better. Our base was still growing back then. Wale didn’t have the following when his first album dropped. But then he did the song with Waka Flocka (“No Hands”) and things took off for him. Waka was a southern artist and Wale was from DC so people down South got familiar. We never had that situation where we landed on another artists song that was huge and popped.

L+T: Why the title GMB?
Mibbs: We called the album GMB this is the beginning of us all branching out and doing solo projects. We wanted to hit them hard with a title that had all of our government names so people could become familiar with who we are as individuals. We are a crew but we all have different things. Like did more producing on this album, I’m stretching the boundaries of being a songwriting and BeYoung is doing his thing. We’re putting our stamp saying that Pac Div is the crew but this is Gabe, Mike and Bryan and if you listen you’ll be taken on a ride. We the album start with reassurance but “Bank” is the song where we are venting our frustrations. People can relate with the economy being real fucked up. Everyone has contemplated robbing a bank before. We go from being regular dudes getting frustrated with the trials and tribulations of life, then we rob a bank and the rest of the album is what we do after we rob the bank.

L+T: “Bank” is easily the most talked about song on the album. Was that all about venting?
BeYoung: Yeah. You might be with your boys one day where money is tight and you look at each other and say “I’m tired of this shit, it’s time to hit that lick.” I’m fed up with this shit, too many corny niggas getting in the way, I’m just at the brink so let’s go get the Brinks truck.
Mibbs: That is probably the most aggressive song we put out. We have a wide range of sounds but we came into that song like N.W.A. I felt like Ice Cube; he’s a fly ass dude but he was mad. Part of being one of the coolest niggas in the world is that there’s a mean streak to you.

L+T: A more personal question, how are you guys doing financially? Have you felt like you needed to rob a bank even though Mibbs says on “Fuck Yall” that you haven’t had to work a real job in six years?
BeYoung: A lot of people want to show the glamorous side of things but the reality is that life and bills never stop. Neither does bullshit. You never really feel too comfortable. Even if you are JAY Z you are looking for that next level. With it being hip hop it’s often overly glamorized. Nobody has it that good, I don’t think.

L+T: On “Fuck Ya’ll” you worked with Kurupt and the song was produced by Battlecat, how did that happen?
BeYoung: It was long overdue, when we first started taking this seriously in 2004 we were going from studio to studio and back then Kurupt was one of the first people that helped us get our stage show together. He told us what to do and what not to do. Now that we have some acclaim this collab is long overdue. We had to do it out of the respect and we got Battlecat too. We’re so influenced by his music. We don’t do anything to get over, it’s all because we want to do it.
Mibbs: Kurupt’s like a big brother character. For him to be looking at us when we were so young in the game, he just looked out for us. We didn’t even ask. He just knew in his heart that we were going to be successful. That’s why he can do no wrong in my book. When I was 20-years-old he gave me a bottle of Hennessy and got me fucked up! I still remember that day. I was throwing up all on the floor.

L+T: [Producer] Like landed a placement [Kendrick Lamar’s “I’m Dying Of Thirst”) on what is easily one of the biggest albums of the year. Did you always know he had it in him?
BeYoung: He’s been doing that since high school.
Mibbs: It was always in his soul. He’s a beat professor. His music catalog is huge. Me and beyoung are more on the lyrical side but this was his hobby when he was younger. I knew he’d be successful. It’s good to see him finally coming full circle because that’s where his true love is.

L+T: 15 years ago, did you have any idea that this is where you would be?
Mibbs: When I was 13 I was rapping. I always knew that I could make music. I had a feeling that we would be here and making music as a career.
BeYoung: We knew we had the talent back then but honestly we thought we’d be putting up 30-40 points in the NBA somewhere.

L+T: You guys are big hoops fans, so if Pac Div were a college team, who would they be?
Mibbs: I’ve always been a UCONN fan. The way they ran their offense with Jim Calhoun they let players play their game like Rip Hamilton, Rudy Gay, Kemba Walker, Ben Gordon and Jeremy Lamb. They were all guards with game. Them and the AZ squad of the ’90s; the one that had Gilbert Arenas, Jason Gardner and Loren Woods.
BeYoung: You gotta throw in the Fab 5 and that 1990’s UNLV squad with Larry Johnson, Stacey Augmon and Greg Anthony. Everybody got buckets and locking down on defense.

L+T: Do you want a spot in the next NBA 2K game?
BeYoung: They are slipping if they don’t put us in the game. We actually have jump shots.
Mibbs: We’re going out there getting those buckets.

L+T: What’s next?
Mibbs: I know Like is working on a album with his production while I’ve been working with Scoop Deville on a nine song EP dropping in January. We’ll do Pac Div stuff in between and get it from all angles. We’re going to flood the market for sure.
BeYoung: I have a project tentatively titled Daily Bread dropping and March. Just like when Rae and Ghost drop albums it still feels like a Wu-Tang album that’s how it will be with Pac Div.