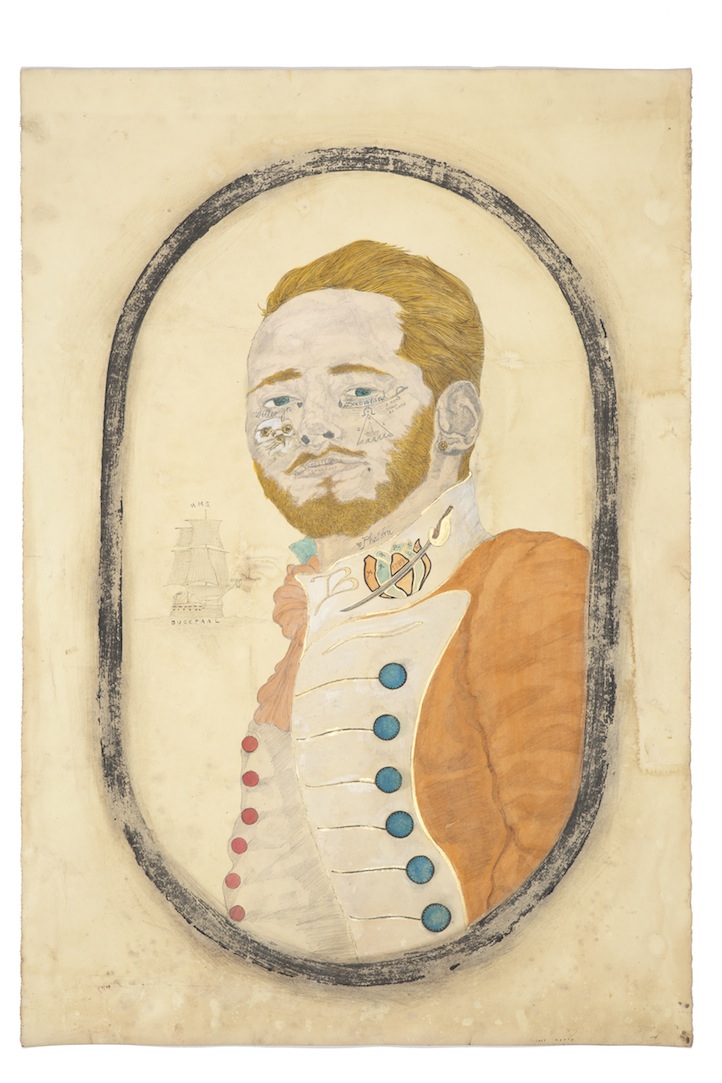 Frohawk Two Feathers, born Umar Rashid, is a Los Angeles-based visual artist who will have his first solo museum exhibition at the Museum of Contemporary Art, Denver, Colorado in summer 2012. His mixed media drawings are, in essence, works of historical science fiction–he began constructing his visual narrative in 2006 after researching details from the Haitian War of Knives, the precursor to Haitian Independence. Frohawk’s solo exhibition “It’s Yours” is currently on view at Morgan Lehman Gallery in New York now through April 14. As Hi-Fidel and other fantastical aliases, he also records with the bands Friday Night, Superdeluxe and Black Spade. (Images courtesy of the Stevenson Gallery).

Life+Times: How does historical perspective play into your work, and where is it taking you moving forward?
Frohawk: I started this entire series by researching the highlight reel of the 17th, 18th, and 19th centuries. I digested that and went back in for a closer look at the people and how the wars were conducted and how the money was made. I made a mental transparency of that and overlaid it on the 20th century, more importantly my upbringing during the golden age of hip-hop, and the culture of the streets. Remarkably, not much has changed. I formed the basis of my century-spanning narrative on the two major players in the game—France and England—and posited the question, “What if they were allies instead of enemies?” Out of that union Frengland was born and an alternate us was created. 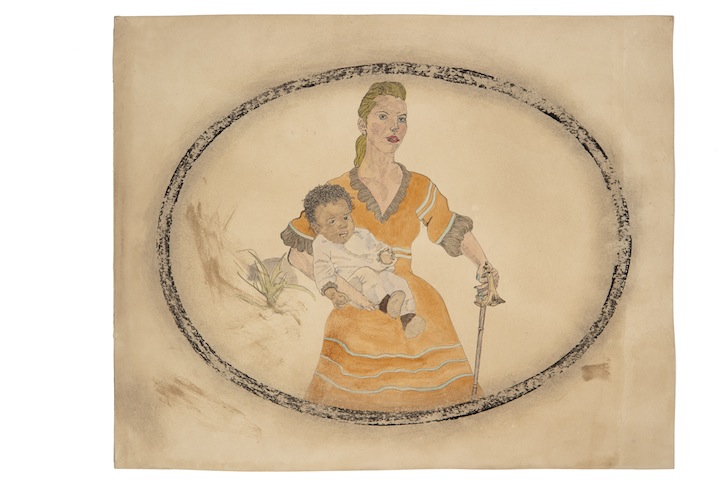 Life+Times: You reference the Haitian revolution with the fictional Frenglish empire that you began painting/tellings in 2006. Can you give us an overview of the story?
Frohawk: My love for history outside of mythology was truly ignited when Budweiser produced a calendar called “Great Kings and Queens of Africa” in the mid- ‘80s. It was the first time that I could see myself outside of the slavery paradigm and feel a sense of connectedness to something greater than my experiences in race-conscious America. This experience led me to root out other notable, sometimes notorious, black heroes. It was always my intention to focus heavily on Haiti throughout this series. After all, the tale begins with a sugar merchant named Bertrand who was born there, the impetus for the North and South American revolutions were cemented there, and the glorious Frenglish empire dissolves and dies there. The invented character Andre Lafayette is based on Toussaint L’Ouverture, and Jean-Jaques Dessalines. And Lafayette’s arch nemesis, Bellerophon St. Marc, is based on Andre Rigaud and Alexandre Petion. In my last show entitled “Company Crocodile: The War of The Dancing Machetes,” I retooled the Haitian War of Knives. That particular conflict had to do with the struggle between the darker-skinned revolutionaries versus the fair-skinned free men of color. The darker-skinned contingent eventually won in my retelling. But much like real life, each one of my characters is a hero and a villain. It all depends on where you are sitting. 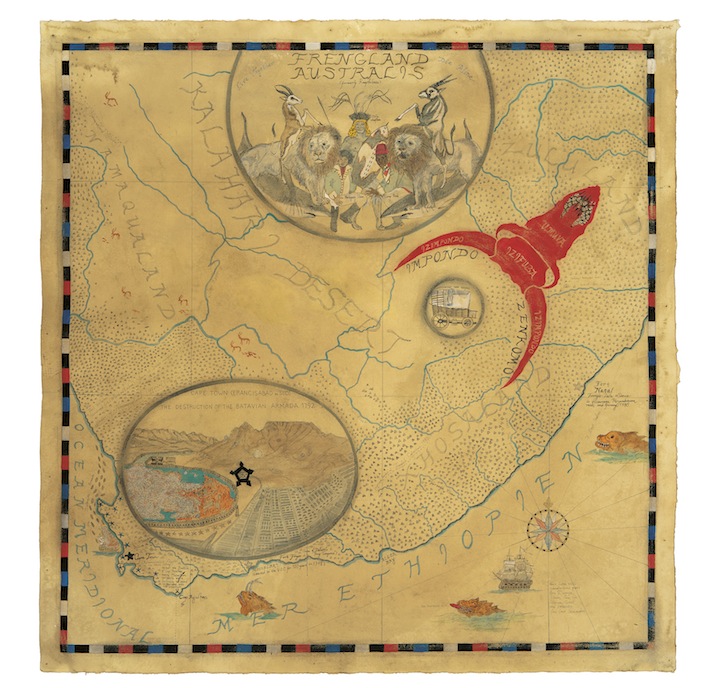 Life+Times: About your name, Frohawk Two Feathers. It’s a nod toward colonialism, from my understanding, which plays into the conceptual nature of your work.
Frohawk: I created the exotic name Frohawk Two Feathers as a play on my African and Native American ancestry. In research, I always find a passage or two written or dictated by a seemingly insignificant source like Coronado’s Aztec tailor, or Henry Stanley’s Congolese water-bearer. Can’t say for sure if they actually existed but I’m willing to bet that they did. Or even more recently, the ghetto dude or woman that appears on the news talking about “what had happened.” Sure, the language might not be as scholarly as some people might like it to be, but it is just as poignant and equally valid. Frohawk plays the observer within my [Umar Rashid’s] work. Frohawk is the outsider looking in on the world, the noble savage who relays the stories of great empires and tiny tribes with wit, humor and scathing criticism.

Life+Times: What kind of materials do you like to work with?
Frohawk: I love working with materials that are easily destroyed. That’s pretty much anything, but paper and animal hides are my canvases of choice. I don’t paint with watercolors. They are beautiful, but they annoy me. And oil is, again, beautiful, but I haven’t the patience for it. I like to create the drawing on the paper and paint it. After that, I begin a process of deconstruction and I fuck it all up. I enjoy working with animal hides because of the range of colors and textures they possess. I mainly use deer and elk, all of it from road kills and the shit that the trophy hunters didn’t want. 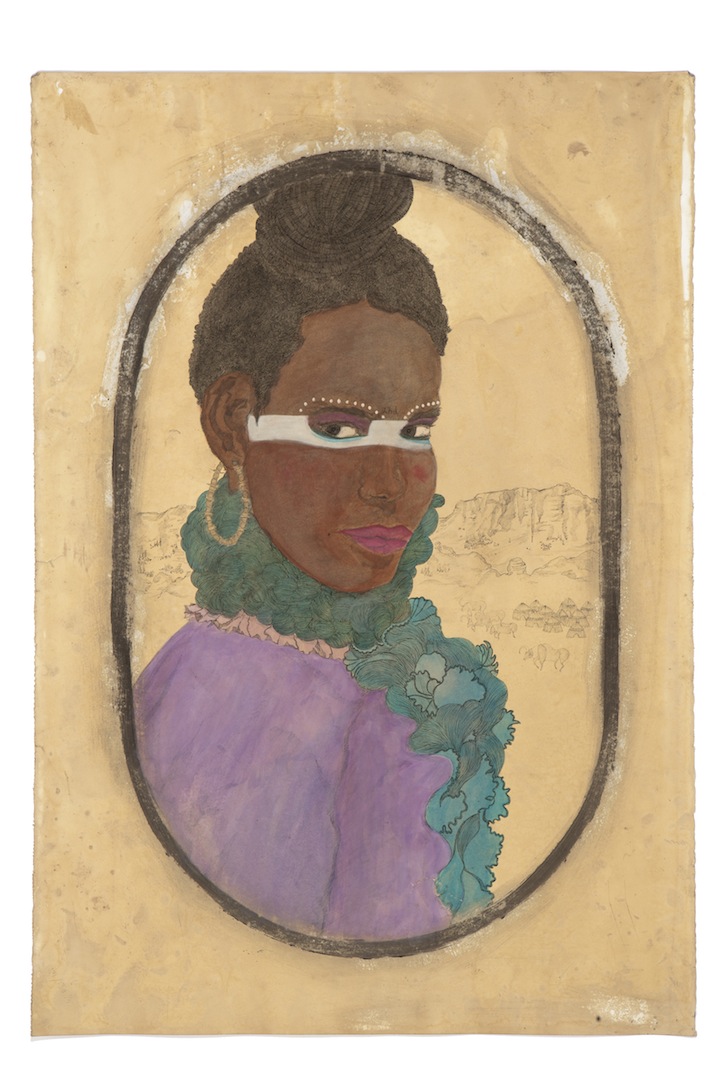 Life+Times: You grew up in Chicago, and live and work in Los Angeles. How does your background in these towns shape your perspective as an artist?
Frohawk: I love and miss Chicago dearly and it will always be my home. L.A. is starting to grow on me in ways that I would not have thought possible. In my painting, I draw heavily from gang culture. As a kid growing up in Chicago, my earliest heroes and tormentors were the gangsters on my block. They had all the money and all the girls and jheri curls and I wanted to be just like them. I got my first taste as an artist with a graffiti crew called 3DB. I could recognize the gang graffiti when I saw it, but that wasn’t my thing until later when I created the Imperial Tattoo System for Frengland. It’s like hieroglyphics and even within the city, there were regional styles of writing, not to mention the various symbols and insignias of all of the different gangs throughout the city. And so, when I moved to LA, I ended up on the east side and got to experience the Chicano side of the gang culture. The gang graffiti was pretty much the same as it is in Chicago, but the facial tattooing is what really piqued my interest and is now somewhat synonymous with my work.

Life+Times: In 2012, you will have your first solo museum exhibition at the Museum of Contemporary Art, Denver, Colorado. What’s going to be included in the show?
Frohawk: The Denver MCA show will include works from the early years of my work and a special section dedicated to the Colorado area. This show is significant to me for a lot of reasons but mainly because this will be the first time that I’ve done a story in and about the U.S. Although technically, within the Frenglish historical narrative, there is no United States. 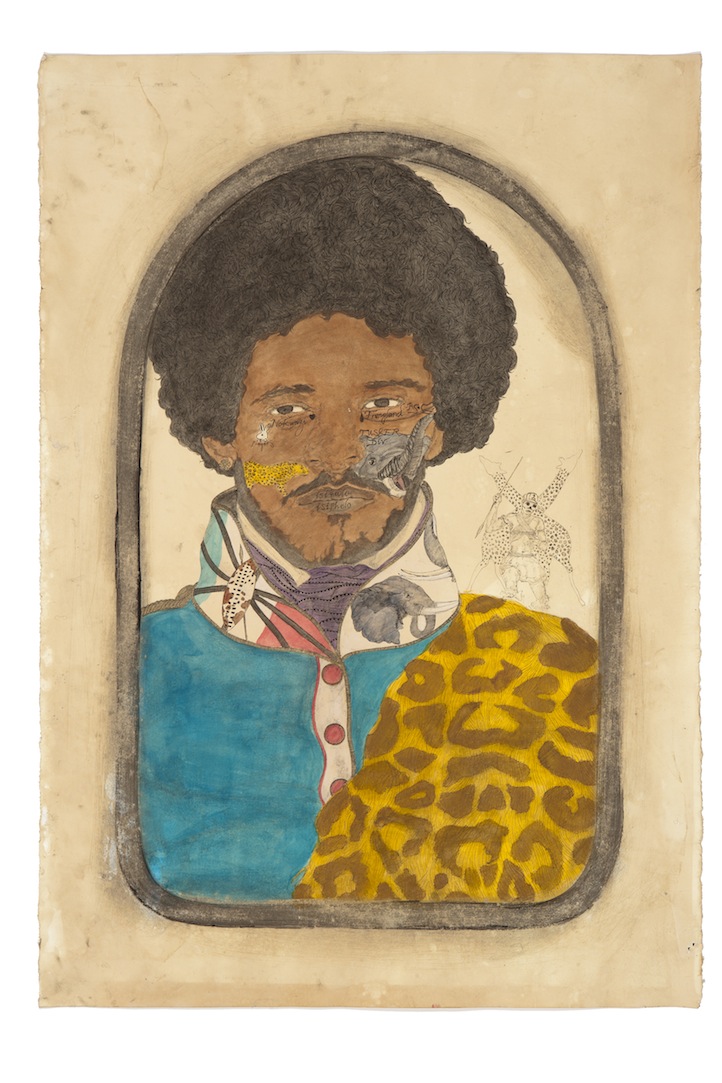