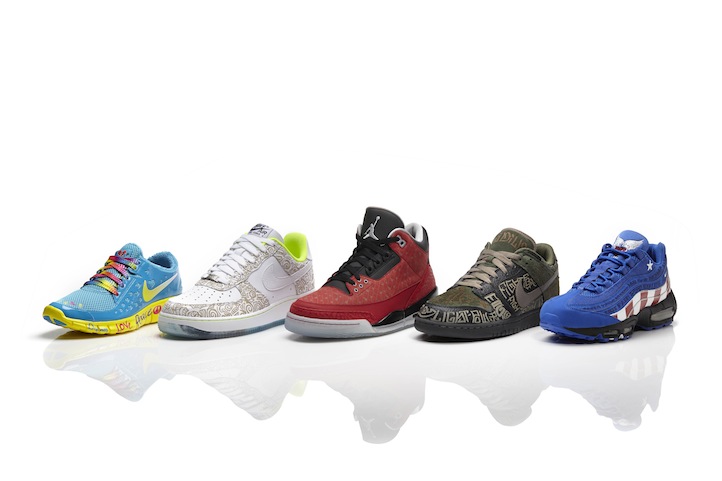 Earlier this summer, sneakerheads were treated to an early Christmas gift when Nike announced its plans to re-release five sneakers from its coveted Doernbecher Freestyle Collection. Coined the Pre-Heat, the collection of re-releases will serve as a prelude for this year’s Freestyle Collection, and includes the Mike Armstrong Air Max 95, the Cole Johanson Air Jordan 3, the Colin Couch Air Force 1 Low, the Shelby Lee Nike Free Run 2 and concluded with the release of the Lance Dillion Nike Dunk Low. Since it premiered in 2004, sneakers attached to Doernbecher Freestyle have been fan favorites and not only has it supplied sneaker collectors with some exclusive, one-of-a-kind designs, it has also saved lives. Through a partnership between Nike and the Portland, Oregon-based OHSU Doernbecher Children’s Hospital patients of the hospital are selected to design the footwear that becomes part of the collection. The designs are auctioned off at an annual launch event and later sold at select retailers with all proceeds directly supporting Doernbecher and its initiative. Unique in its approach, Doernbecher Freestyle relies on talented, creative and passionate individuals like Nike’s Creative Director of Global Brand Presentations, Michael Doherty who are committed to seeing these children’s visions come to fruition. “The thousands of Nike and Doernbecher employees become emotionally involved in the effort,” says Michael, who has overseen the project since its inception. “They create these amazing shoes and now there’s an appetite for these shoes. It’s just a very cool program that has sort of taken on a life of its own at Nike.” After ten years and over $6 million raised, the Doernbecher Freestyle project seems to only be getting stronger. Life + Times spoke with Michael Doherty about how the Nike and Doernbecher partnership has evolved over the years, what to expect from the 10-year anniversary celebration and how the Nike’s Doernbecher Freestyle was actually the brainchild of his 14-year-old son.

Life + Times: How did the partnership between Nike and the Doernbecher Children’s Hospital begin?
Michael Doherty: I was asked to be on the Doernbecher board, because of my role as the Global Director of Brand Presentations at Nike. They knew I had experience in design on the content and presentation side doing events for Nike’s product launches, PR events and that kind of stuff. The hospital was looking for a way to freshen up some of their fundraising efforts. I was thinking of what I could do that wouldn’t cost them too much money. I was use to being at Nike where you could spend some money to make something happen, but with a nonprofit you don’t do that [laughs].

L+T: You being a Doernbecher Foundation board member shows you really believe in the hospital’s mission. What was it about what Doernbecher was doing that made you want to be a part of it?
MD: They see about 50,000 patients a year. As a research facility they are doing remarkable work trying to cure a lot of infant and childhood diseases. Everybody involved feels like they’re actually contributing to saving lives. It’s one of the top five hospitals for a number of things. I’m just happy to know that the hospital is able to attract really talented physicians because of the visibility of the Nike Doernbecher project. My goal is to get Doernbecher the kind of visibility St. Judes has. 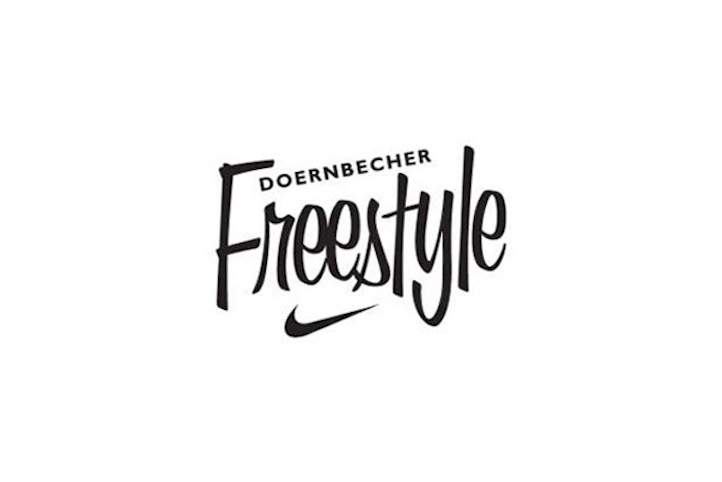 L+T: Where did the concept for the Doernbecher Freestyle Collection originate?
MD: It was actually my son Connor’s idea. He was a high school sophomore at the time and a big sneaker collector. He suggested that we do some sort of online thing featuring exclusive shoes. That was the birth of the idea. It was later suggested that we involve the kids on a deeper level. We had a little auction and we were only looking to raise enough money to supplant one of their other projects. The event brought out about 100 people and raised about $120,000 and we were happy with that.

L+T: How has this partnership between Nike and Doernbecher evolved over the last decade?
MD: First we began to expand the profile of shoes. Our first run of shoes were Dunk Lows and from the Skate profile and then other categories like Running and Jordan were gracious enough to let us use some of their platforms. I later asked my friend who was the head of retail if we could get the shoes into Niketown in Portland and he responded “Why are you thinking so small? Let’s put them in all Niketowns and online.” We’ve raised over $6 million since. Now apparel is involved. For the first time the kids are allowed to design a hoodie or a t-shirt or a cap that will reflect their design as well. It’s really evolved into a program that everyone involved with is really proud of, but if it wasn’t for my 14-year old son we’d be doing some circus or a celebrity baseball game or something [laughs].

L+T: Was it difficult pitching a 14-year old’s idea to a major corporation like Nike?
MD: No, not really. I’ve been at Nike for about 30 years or so, I’ve had a lot of different jobs there and I have a lot of friends at the company, so as far as with pitching the idea I basically just went door to door to find the guy that was in charge of the Skate program at the time and see if we could use some their footwear profiles. I then went to Running, Jordan, etc. It just evolved to the point where we gained a little traction for the project and people became aware of it and then the designer-developers really wanted to be a part of it.

L+T: Could you walk us through the design process? How involved are the children in designing the sneakers?
MD: We have the hospital identify six kids that are patients. We bring them out to Nike and hook them up with a designer-developer team. The kids have their own vision and come up with the designs. While at Nike’s material lab they go through various materials and stuff. This isn’t a fake cosmetic program at all. It’s the real deal. The kids put their designs on the footwear and they are sometimes coming with up to 20 sketches that they want to explore. Some come with one very specific idea of what they want the shoe to look like. The designer-developers do whatever they can to carry out the kids’ visions. We really push the envelope here with the Doernbecher project in terms of footwear development and design. That’s why they are so cool and so sought after in a limited-edition kind of way. It’s because they are so unique. 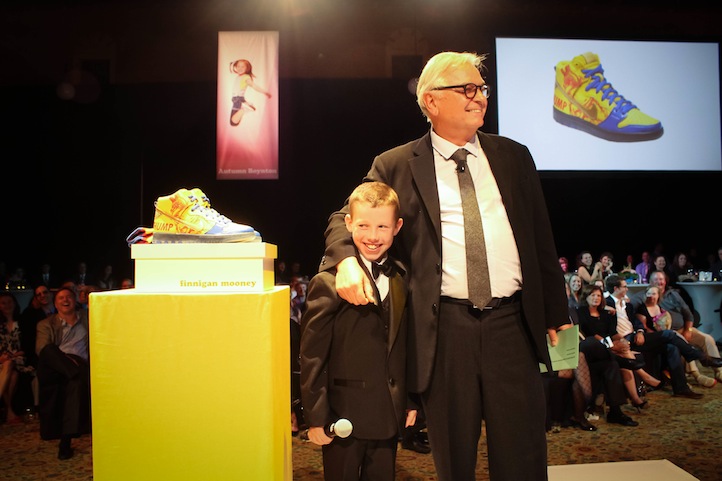 L+T: Aside from the obvious financial benefits, what kind of impact can a project like Doernbecher Freestyle have on the children involved?
MD: These designs are the vision of these kids who have had really tough journeys throughout their lives. It becomes a focus for these kids and a way for them to kind of explore the journey that they’ve been through. A lot of the kids use the shoes as the story of their journey with what their disease is or about the sport that they love or about words that mean something to them. Many of them have really been through a lot from chemo to multiple heart operations. The kids also get a little taste of philanthropy. They feel like they’re giving back to the hospital. They also want to represent for the other kids that are patients. It’s very heartwarming and inspiring on a number of different levels.

L+T: This is the 10th year of the Nike and Doernbecher partnership. What are some of the things planned in celebration of this very special anniversary?
MD: For our 10th anniversary we’re doing what we’re calling a Pre-Heat of some classic profiles that were our best sellers over the past ten years. There’s the Air Max 95 by Mike Armstrong, the Air Jordan 3 by Cole Johanson, the Air Force 1 Low by Colin Couch, the Nike Free Run 2 by Shelby Lee, the Nike Dunk Low by Lance Dillion and we have a final one that we’re surprising people with. The story behind that one is absolutely incredible. It’s inspired by a patient who was obsessed with Call of Duty: Black Ops and all the basketball video games. We did a combination of things for his shoe with a special lasering of a poem that he had written. Unfortunately, he passed, but he submitted his designs before he passed and we’re realizing his vision of what he saw in footwear with a Jordan shoe. It will be spectacular. On September 28th we’re doing our auction in Portland as we always do. This year we’re auctioning off seven shoes instead of the usual six, because this year we have a set of twins designing. We’re also doing an auction for our influencers at one of our energy centers in Manhattan. Ten years is a big deal. We raised over $6.5 million now. It appears we’re building every year.

L+T: Years down the line, when someone looks back on this Nike and Doernbecher partnership, how do you want it to be remembered?
MD: We just want to do our part. I think it’s just gratifying to see how everybody at Nike from the CEO Mark Parker to the factory workers that assemble the pieces is enthusiastic about the project. There are several thousand people that touch this project including the sales associates, factory workers, the folks in development, etc. I’m just the front-man, but it’s my brothers and sisters here at Nike that really step up. I think for everybody involved it’s a win. I just want this project to continue to help save lives. Of course, the physicians and those at the hospital are saving the lives, but if we can provide them with some of the resources needed then our mission is accomplished. That’s all I could ask for.