Envision a hybrid band consisting of Ann Wilson from Heart (circa 1977) inspired by the ferocity of Rage Against The Machine’s self-titled debut album. This amalgam is none other than LA based band, Nico Vega. Reminiscent to Heart and Rage? Yes. However, Nico Vega is far from an imitation of either bands. Though the band has been around since 2005, it was the incorporation of the band’s aggressive track, “Beast,” in a BioShock Infinite commercial that captured the responsiveness of most. The attention demanding hymn was one of the first songs the band ever wrote. “Personally, I was just fed up with the position of people in our country in the US. I felt like people were asleep at the wheel and would take whatever was handed to them,” vocalist Aja Volkman states in reference to the eight-year old track (“Beast”). “I wanted to rally the people together and have a wake up anthem.” In addition to being a singer-songwriter, Aja is wife to Imagine Dragons’ Dan Reynolds, and a new mom. Being a mother to a one-year-old has not put the brakes on band life. Nico Vega is currently touring with the Crash Kings and Aja’s baby is also along for the ride. “It’s not easy, but we make it work,” she interjects. Lead To Light, the band’s sophomore album, will drop at the end of the summer. Aja, the Supermom vocalist, paints us a picture of life on tour and what it means to “find that place where you’re at peace.”

Life+Times: I had no desire to play BioShock Infinite until I saw the commercial. I literally searched everywhere to find out what band was behind that ad track. How did the BioShock team even come across “Beast?”
Aja Volkman: Well, there’s a woman who works over there. They’re based out of Boston, but she lived in LA prior to that. She had known about the band and was a big fan. When it came to licensing and selecting songs for these trailers, she was like, “I have this band and there’s this song and it’s just perfect for it.” She introduced it to the guy that was in licensing and he fell in love with it. It was a match, you know?

L+T: It fits it perfectly.
AV: I think so too! I’m like, ‘Wow, that’s crazy!’ It’s almost like we wrote it for the video game. We really didn’t. It’s really, like, eight years older than that.

L+T: Yeah, it’s been out for a while. When I found out the date of when “Beast” was actually released, I was like, ‘Wow, am I really that late on this track?’
AV: Well, hey! It’s funny when you’re in a band. You really try to get the word out there and the music out there. It’s a lot harder than people think actually. We have tons of videos and we’ve released tons of stuff – it’s just now really starting to happen. So, it’s kind of amazing. You can work really hard and have all of this stuff and it really comes down to luck. You know what I mean?

L+T: Timing has everything to do with it.
AV: Yeah, absolutely.

L+T: The track is on the Fury Oh Fury EP and it will also be on the Lead To Light album, right?
AV: Yep. 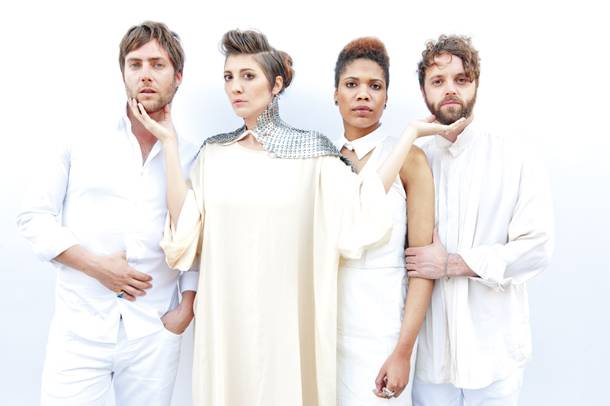 L+T: Is there a release date yet?
AV: We don’t have the exact release date, but I know it’s probably nearing around the end of summertime. It’s interesting because it was due to release way earlier, then the track (“Beast”) started getting all of this attention and success. So we pushed the release date because we were like, “Wow, we should really let this unfold a little bit more before we drop the record because more people will know about it.” The release date just kept being pushed.

L+T: Why not? That’s smart, that makes sense. I had a chance to listen to everything at this point by you guys. As much as I love instrumentation, I especially noticed the strength in the lyrics. On the self-titled debut for example, on “Million Years” a line reads: “A spider bite is a natural wound/But a dagger in the back is a plastic tomb.” How important is it to you in keeping your veracity of character versus just pushing a song for its hit factor?
AV: The lyrics just happen and they come really naturally and I just put them down. If I work really hard at it or try too much, it just doesn’t come out as fluidly. For me, it’s just important that the song has a deep meaning for me. Usually if it has a deep meaning for me, somebody else will find meaning inside of it as well. Its’ been a little obscure in the past. I’m sure some people are like, “What the freak is she talking about? I can’t understand.” I think I’ve gotten better over the years with making it more of a universal message or something that has a little more clarity to it. I think that’s always hard as a songwriter – you’re writing music for yourself, but you’re also kind of trying to make it something that the world connects with. Some people probably aren’t and don’t care about that, but I like to try to inspire people with music, with lyrics. I think that’s always a challenge. Sometimes you go through some kind of a dry spell and you’re writing stuff and you’re like, “This has been said the seven billionth time. I need to do better.” It’s about crafting a creative way to say something different that’s been said before. Maybe say the same thing, but in a different way.

L+T: I get what you’re saying. Some people might think that the lyrics are ambiguous or sometimes even a little harsh. I view them as just being honest.
AV: They are very honest.

L+T: I appreciate that. Various bands go about things the safe way. If you really want to make a statement, you have to be true to your band and who you are. So you have to be honest, right?
AV: Yeah, I agree. I think that as an artist your job is to be honest. My mom put it really good. She was talking about that the world only gets to know you only if you let it get to know you. If they don’t see your art, the world doesn’t see your art. It’s the only opportunity for the world to get to know you. I think that being honest is really important. If you don’t make your art, you’re actually doing a disservice to the world and yourself because you’re not sharing yourself with the world. You’re not opening yourself up – that part of yourself. Some people probably don’t want to or don’t care to.

L+T: You’re a mom, wife, singer, and an artist. I really admire this. When do you find time to even write?
AV: (Laughs) Well, my husband’s (Dan Reynolds) gone. He’s gone all of the time with his band (Imagine Dragons) running around the world. We don’t get a lot of time together. I take my baby everywhere with me. I’ve only ever spent one night away from her. She’s a trooper, she’s awesome. My band is really loving and caring about having a baby with us. They’re just such family people that it works out. They are like a total family to me too. They just really work around my lifestyle. They care and I think things are going to get more difficult in the future because the drummer’s wife is also having a baby. There will be more hurdles, but when you love what you do and you really believe in the people that you work with – you care to do it, that’s what you do with your free time. I have very little free time, but I have help. My family is really active in helping me. We make it all work. There’s things you don’t ever want to compromise with. I want to be a really good mom. I don’t want to be someone that leaves all the time at all. Unfortunately, my poor husband feels the same way, but he doesn’t have the ability to stop that right now. You have to strike while the iron’s hot and it’s hot for him right now for sure. For me, my life is a little more flexible.

L+T: You are Supermom! Well, that’s awesome you have an excellent support system. That’s definitely helping you! My last question is based off of a recent Facebook status that you posted on the Nico Vega page. The post was talking about how unsettling it is to be wrapped up in the past and future and appreciating the current moment. How are you able to find peace despite being on tour and having a full life?
AV: That’s probably the number one thing I struggle with every day. I work really hard to be an independent woman and appreciate where I’m at. It’s so hard to find that place where you’re at peace. I know very few people who feel that they have a grasp on that. I think so much of it is just about having to constantly have that conversation with yourself, ‘This is what I’m doing. I’m here.’ I think some people are better at it than others. My head is all over the place all the time. I have to reel it in. I’m an extremist for sure. I really try to keep myself balanced. Whatever I’m doing, I’m doing it full wholeheartedly committed. I’m committed to balance and I really try to stay in the present moment and be grateful for the things that I have right now. Things can really shift and change in a matter of seconds. It’s just important to enjoy what we have and not be like, “I’ll be happen when” or “I was so happy before because I had…” Living is about being here and enjoying this moment and this journey that we’re on.