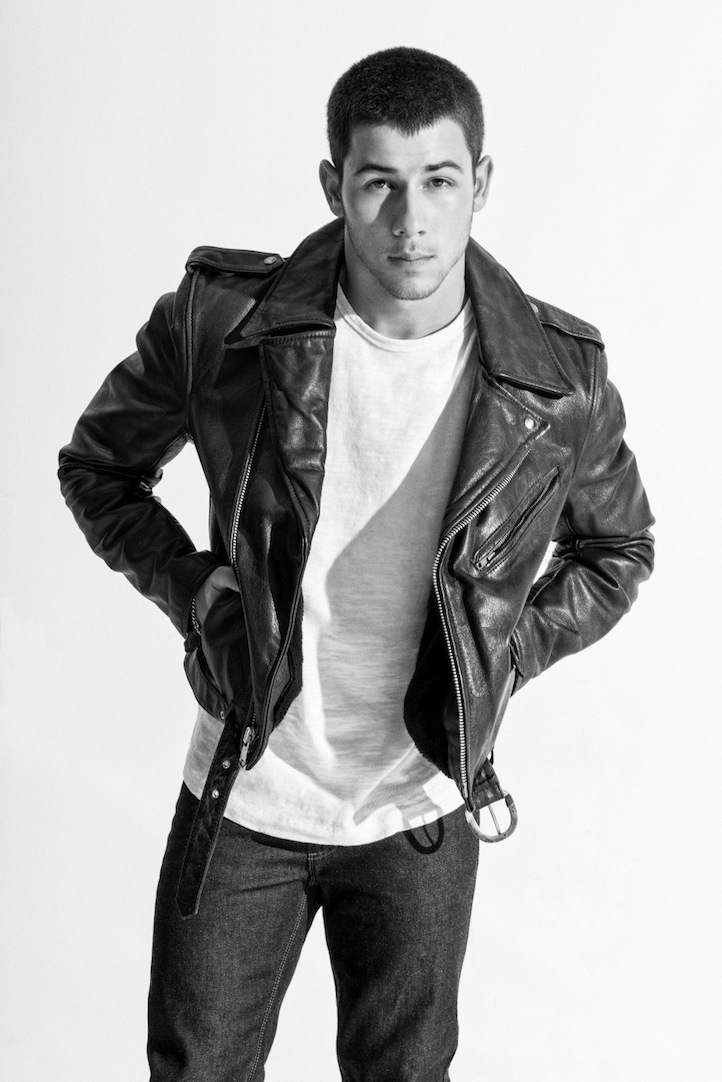 Since debut albums are almost always associated with new artists, Nick Jonas – who has released four albums, sold over twenty million records, been nominated for a Grammy Award and toured the world on several occasions as a member of The Jonas Brothers – has found himself in an interesting position. For the singer-songwriter, the recent release of his first album as a solo artist has been both an introduction and reinvention of sorts. In lieu of the pop music he and his brothers had become synonymous with, the 22-year old veteran opted to craft songs that have much more of a soulful and R&B influence and that are understandably more mature for his self-titled debut. “I feel like you have to go in and create with the mentality that you’re making the music you need to make,” says Nick, who over the last few years has been steadily distancing himself from his boy band image. Though difficult, the former Jo Bro is proving that it definitely isn’t impossible to escape the constraints of former boy band glory. His current single, “Jealous” – which has been remixed by R&B newcomer Tinashe – has so far peaked within the top ten on Billboard‘s Hot 100 chart.

Life + Times recently chatted with Nick Jonas about life as a solo artist. Here, he talks about his new album, songwriting and collaborating with Tinashe.

Life + Times: It seems like both critics and fans have really been enjoying Nick Jonas. How does it feel knowing that both critics and fans are supporting you on this solo journey?
Nick Jonas: It’s been incredible. It’s kind of out of your control whether people will like it or not, so you have to be proud of the music you are making before anything else. I’m really proud of this record, so to know that fans and critics have given it a thumbs up means the world to me.

L+T: What are some of the things that inspired Nick Jonas?
NJ: A lot of life experiences. On this record there’s everything from relationships, love and all that stuff to family to being young and just wanting to celebrate and party. There are a bunch of different textures on this record, but I think everything comes from a very real place.

L+T: Was self-titling this album your way of letting fans know that they’d be getting a piece of who Nick Jonas really is with this project?
NJ: Definitely. I think making the record self-tilted was intentional. It was me just sort of introducing myself as a solo artist and also as my own person in a lot of ways. I’m happy I did that. I think it sent the right message.

L+T: Were you ever nervous about leaving the sound that you had created with your brothers behind for this more R&B-infused pop sound?
NJ: I think for me it was a very natural transition that had been happening over the course of several years. I’ve done a lot of songwriting and producing for some other people, so I have had the chance to expand my musical horizons in a really natural way. I’ve been able to collaborate with some people that that have pushed me, which help me to kind of lock in on my sound and figure out what it was.

L+T: Did you feel more of a sense of freedom while creating Nick Jonas then you may have while recording some of your previous projects?
NJ: Yeah, I think so. The freedom really came in with not being afraid to create, vibe-out and see what could happen. I think you have to create with an open mind. You do your best work a lot of those times.

L+T: You were very involved with the songwriting on Nick Jonas. In general, how important is songwriting for you?
NJ: Writing songs has always been a big part of my life. In a lot of ways it’s the best way for me to process certain things and has always been very therapeutic. I’m thrilled to have that outlet for me to tell my stories. Also, the songs that have really connected with the audience have been songs that I’ve written, and that’s probably because of the personal touch.

L+T: Why did you want to work with Tinashe for the “Jealous” remix?
NJ: She’s incredible. I was really amazed by her professionalism, her work ethic and what she brought to the song. She killed it. I got to get on 106 & Park with her to perform it, which was pretty amazing. She’s just a really talented person and I’m excited to see where she goes. I’d definitely be down to work with her again.

L+T: I’ve read that you’re like a sponge in the studio and that you soak up as much as you can, so outside of your brothers, who has been someone that you’ve worked with that you’ve been heavily influenced by?
NJ: I did a project called Nick Jonas & The Administration a few years ago, where I was able to really vibe out and create with some people that I really respected. These were guys that had played with Prince and some other really amazing artists, so just trying to pull from them and the experience they had was an amazing learning experience for me. I think as long as you’re willing to be a student and learn, you can come out a better musician and artist anytime you surround yourself with really talented people.

L+T: So far, what has been the biggest challenge during your solo journey?
NJ: I think the biggest challenge so far has been sort of educating people on who I am now as opposed to their first introduction to me on my previous quest. I’m so happy it’s happening now, where people are getting to know who I am today. It’s been a journey and it’s definitely taken some time to get it to this place.

L+T: You were Creative and Musical Director for Demi Lovato’s Neon Lights Tour. Was that your first experience with creative or musical directing a tour?
NJ: I’ve done that before with the brothers. We had people in place when I was with the brothers, but we always came up with ideas as far as the musical direction side of things. I kind of took on a bit more of a responsibly this time. Doing it for Demi was amazing. I really loved working on this tour with her. Having such a solid friendship with her helped make that experience that much better.