The slightest glance at actor Kevin Daniels could spell a populace assumption that his academia background is more JUCO than Julliard. That guess would be amiss as the 6’5 actor’s hoops career has just begun with the current Broadway production Magic/Bird. The bio-play is based on the nuances of the ‘80s historic NBA rivalry, which pillared the two champions to legends – Daniels plays the Lakers’ iconic “Showtime” engine, Erving “Magic” Johnson.

The San Diego born, Houston, Texas raised 35-year-old may be a novice baller but as thespian, though existing mostly under the radar, he is quite seasoned. From television (Law & Order was his first small screen guest spot, Modern Family his most recent) to theater (Lincoln Center, L.A., Canada, London…) to film (Ladder 49 alongside John Travolta and Joaquin Phoenix; Hollywood Homicide with Harrison Ford, And Then Came Love opposite Vanessa Williams), Daniels is as diverse as Magic Johnson’s stat line. Life + Times caught up with the rising star in New York, on the eve of the play’s opening night, to discuss his bright past, present and future. And yes, Kevin graduated from Julliard.

Life+Times: How did you land the Magic/Bird role?
Kevin Daniels: They originally sent invites out to a couple stars but then decided to go with actors that weren’t as well-known so the audience wouldn’t associate them with anything but the show. I was in L.A. at the time, working on a film, and got a call from my agency; they were like we want to get you on tape for [the audition]. So I sent [the producers] the tape, they liked it and flew me to New York to meet the team. The next day I got the offer.

L+T: Was the audition process really as smooth as it sounds?
KD: It was a little nerve-racking. They had been searching for somebody for a long time and they weren’t finding that person that captured the essence of [Magic Johnson]. So I guess I walked in and [director] Thomas [Kail], [lead producers] Fran [Kirmser] and Tony [Ponturo] saw something that they liked. Tom has been a little ninja genius director; he’s real specific about what we can do to best tell this story. It’s been a great process. I don’t think I’ve had this much fun and learned as much as an actor as I have working on this. 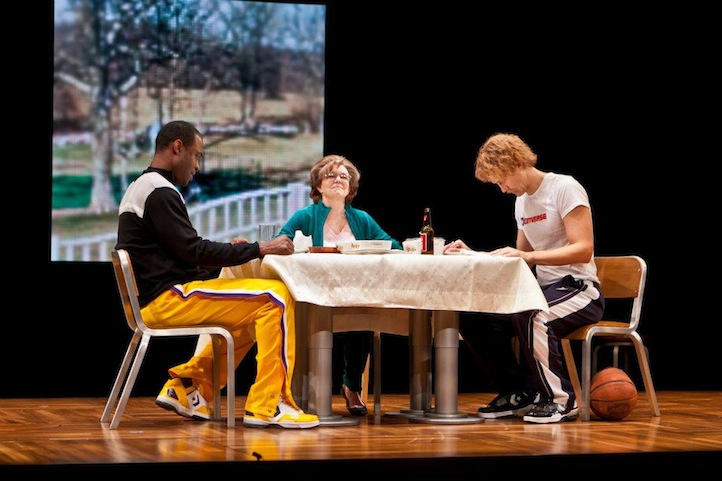 L+T: As a lover of both theater and hoops, what can I expect from Magic/Bird?
KD: What we’ve done is make this show accessible for people who know nothing about basketball as well as those who know every single detail of this story. We all have memories of who these men were, from their amazing plays to amazing shots, and this show is about showing those memories in a different light. It shows you that the men they were made them the champions they are today.

L+T: Did you have the opportunity to meet Magic?
KD: I did! I met him in L.A. and I must say, that is one cool cat. I see why he’s a mogul extraordinaire, because he takes his time and focuses just on you. He makes you feel like you’re the most important person in the room. He’s just a genuinely great guy. It’s like ‘Oh, that’s why they call you Magic, because you’re magical.’

L+T: You’re 6’5. Do you play any basketball?
KD: I didn’t play a lot of ball growing up, which is one of the things I was most afraid of while auditioning. These guys were at the top of their game, so the idea that they were going to find somebody of NBA quality, let alone five-time NBA champion quality, would’ve been pure luck. So we worked it. Don’t get me wrong; I’ve been in the gym every day working on my basketball skills. I’ve got this great trainer named Scientific Mapp who was a big ball player out here in New York. He knows a bit about ball-handling and some of the tricks I need to learn. So I feel confident in what I have to do in the show to make it believable, but it’s more about who they are as men.

L+T: Sounds like you’re excited about the improvement in your game.
KD: Yeah my game is definitely improving, but what’s funny is now that I know how to play they’re like “No, you can’t get hurt. You have to be able to perform eight shows a week!”

L+T: So who in the thespian realm has inspired you?
KD: When I was growing up it was Fresh Prince and DJ Jazzy Jeff. So now I see [Will Smith’s] career and it’s like ‘Wow, you’re a mogul. You can do whatever it is you wanna do.’ I look at Jeffrey Wright, who people don’t really talk about but is a chameleon. He’s played all kinds of roles and that’s the kind of stuff I wanna do, just disappear into a role. Like Daniel Day Lewis, just pick whatever role and completely transform into it.

L+T: Wright and Lewis are phenomenally diverse actors. But with those types of idols, what do you see as your ideal role?
KD: Wow, that’s a great question. The Mountaintop was just on Broadway – Samuel Jackson and Angela Bassett were in it. I would have loved to play [Martin Luther King] but I’m too tall. I love deep human drama where a person is dealing with an obstacle and whatever type of endurance it takes to overcome it.

L+T: Speaking of obstacles, does your height hinder you from securing certain roles?
KD: Sometimes. Like I did this movie with Halle Berry on ABC, Their Eyes Are Watching God and I remember, cause we were shooting at the Disney Ranch in California, the director was like “Hey Kevin, can you sit because we can’t see the mountains behind you.” So if I’m the lead on a film and the female lead is like 5’6 it’s hard for them to put both of us in the shot. So you’ll see a lot of tall guys sitting or standing, or they’ll just hire taller [female] leads. But once you establish a profile your height doesn’t really matter, they’ll work around you.