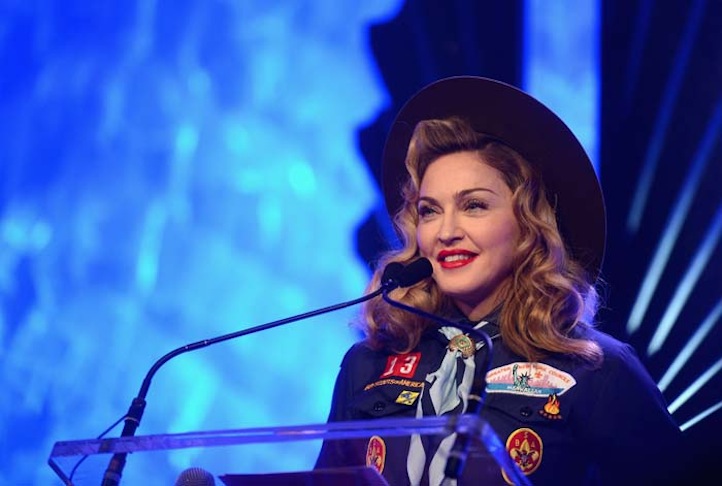 Saturday night marked the 24th Annual Gay and Lesbian Alliance Against Defamation (GLAAD) Awards ceremony in New York City, the yearly event that honors the LGBT community. Madonna, on hand to present Anderson Cooper with the Vita Russo Award, presented the CNN journalist with the night’s top honor for both his bravery and dedication. Dressed as a boy scout (in protest of the organizations ban on gay scouts and leaders), Madonna’s speech was infused with the notion of a “revolution” – one she wants to start with Cooper. Here, in its entirety, we present you with the pop icon’s speech, in full.

“So happy to be here. I wanted to be a boy scout, but they wouldn’t let me join. I think that’s fucked up. I can build a fire. I know how to pitch a tent. I have a very good sense of direction. I can rescue kittens from trees. Listen, I want to do good for the community. And most importantly, I know how to scout for boys.

So, I think that I should be allowed to be a boy scout, and I think that they should change their stupid rules. Don’t you? Yeah? You guys don’t sound excited enough. Don’t you think they should change their rules? Alright, so — you may sit down. Please, relax. I have a few axes to grind. I’m not going to talk until you’re all sitting. I want you nice and cozy in your seats. I brought a book in case you take too long and I need to read.

Well, I was a girl scout, but I got kicked out. And you want to know why? Because my skirt was too short, and I never sold enough cookies. I ate the cookies. Those peanut butter patties are good. Anyway, we already talked about that.

I don’t know about you, but I can’t take this shit anymore. And that is why I want to start a revolution. Are you with me? It’s 2013 people. We live in America — land of the free and home of the brave? That’s a question, not a statement.

But, I do love that word brave. I don’t fling it around very often. I don’t know a lot of brave people. In the song you just heard, I sing the line, ‘It’s so hard to find someone to admire,’ and that is the reason I am here — to give an award to someone I admire, to acknowledge someone who is brave. Someone who has made a difference in the world by promoting equality and giving a voice to the LGBT community. I am here to honor you, Anderson Cooper. Now you can stand up!” – Madonna