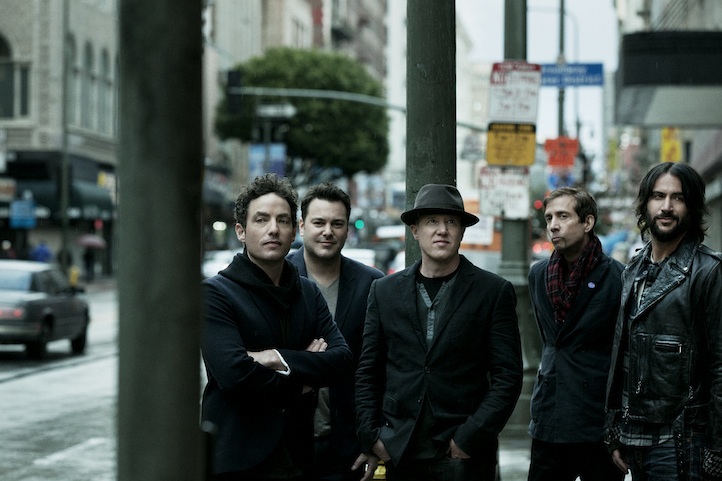 They’re back, and judging by the name of their new album, The Wallflowers are Glad All Over. Their first single, “Reboot The Mission” is a Clash-inspired track with an unmistakable shuffle backbeat, featuring [The Clash’s guitarist] Mick Jones on vocals and guitar. Recently wrapping up recording in Nashville, at Easy Eye Sound studio, the new album finds frontman Jakob Dylan joining original band members Greg Richling (bass) and Rami Jaffee (keyboards), with The Wallflowers’ longtime guitarist Stuart Mathis and drummer Jack Irons (The Red Hot Chili Peppers, Pearl Jam) rounding out the lineup. Here, Dylan fills us in on the benefits of strength in numbers.

Life+Times: Your new album, which is certainly a long-awaited one, will be released on October 2nd and the name of the album is Glad All Over. What’s behind the name?
JAKOB: We decided to call the album Glad All Over because the band wanted to put an image of positivity forward with this record.

L+T: Your new single, “Reboot The Mission” is a Clash-inspired track featuring Mick Jones on vocals and guitar. How did this collaboration come about?
JAKOB: The band is a long-time fan of The Clash and when discussing the influences for this record, certainly The Clash came up – particularly their record Sandinista! After having name-checked Joe Strummer in the song, it seemed to make sense to go all the way and be bold enough to ask Mick Jones to participate.

L+T: You recently wrapped recording in Nashville. How much of a Nashville influence is embedded in your songs?
JAKOB: I wouldn’t say much. We were pretty much holed up together in the studio. We didn’t play much outside of the studio. We were there mostly to record. But with Nashville being such a generous music town, I suppose it found its way in.

L+T: What did you learn most about yourself as a musician by putting together this album?
JAKOB: With this record, after having made a couple of solo records, it was re-confirming for me to learn that at the core of me is a band member as opposed to a solo artist. And being surrounded by the guys again was nothing but a joy.

L+T: You also released two solo albums throughout your musical career. What’s the best thing about being back together as a band?
JAKOB: With a band, there’s this chemistry of a number of people that create something individual that you can’t get as a solo artist. The Wallflowers have a unique sound that we’ve all worked on for years and getting the chance to revisit it again was welcomed.

L+T: It’s been said that Glad All Over sounds like a group of 21 year-olds ready to set the world on fire, but with the wisdom of a veteran band that knows how to let just the right amount burn. Do you agree? Disagree?
JAKOB: I think that with the band coming back together, we all re-prioritized and accumulatively agreed that we wanted to have the perspective of beginners versus veterans when recording. And we all came with fresh eyes and fresh ears and I would agree with the above mentioned quote for sure.

L+T: If you had to choose one song off this disc, what is the most personal one and why?
JAKOB: As most song artists would say… I don’t find any one song more personal than the next one as they all mean a great deal to me. Ultimately, the band could not be more excited about this collection of songs and we are eager to get out and start playing.