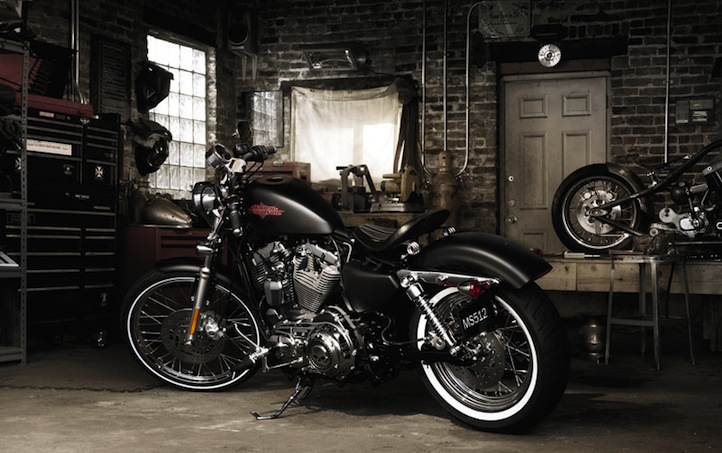 In 1972, Atari launched the first generation of video games with Pong, Bobby Fischer was king, Volkswagen Beetle topped the Ford Model T, President Nixon’s Watergate scandal shook the nation, and the Apollo 17 landed on the moon. Within the mix of things during that historical leap year, the California low-rider culture was shaping form, as candy-colored custom choppers began to cruise down Whittier Boulevard, turning pedestrian heads with each twist of a throttle. It’s this era that has inspired Harley-Davidson to design and release its new Seventy-Two bike. A laid-back Sportster with sparkling metal flake paint, ape handlebars, throwback peanut tank –which holds only 2.1 gallons of gas– and narrow whitewall tires, the Seventy-Two pays homage to a timeless moment in history. Life + Times caught up with Frank Savage, Manager of Industrial Design at Harley-Davidson, to take a trip down memory lane and to chop it up about attitude and style.

Life+Times: Harley-Davidson rolled back the clock with the Seventy-Two. What made Harley pinpoint that year?
Frank Savage: We always had inspiration coming from the late ‘60s and ‘70s on this bike, and really stripped down old school choppers, that was narrow and had this smoky, candied sprayed paint from that era. So, in the investigation for the Seventy-Two we were looking for that historic relevancy. In California, they used to cruise down Whittier Boulevard in East Los Angeles, which was Route 72 back in the day. It has a nice ring to it and a historical reference to it. That’s the story. The old school funky psychedelic paint jobs, with big bling flakes, and really nice, stripped down styling. Guys were basically swapping the tank, adding a lot of chrome, and just jamming. 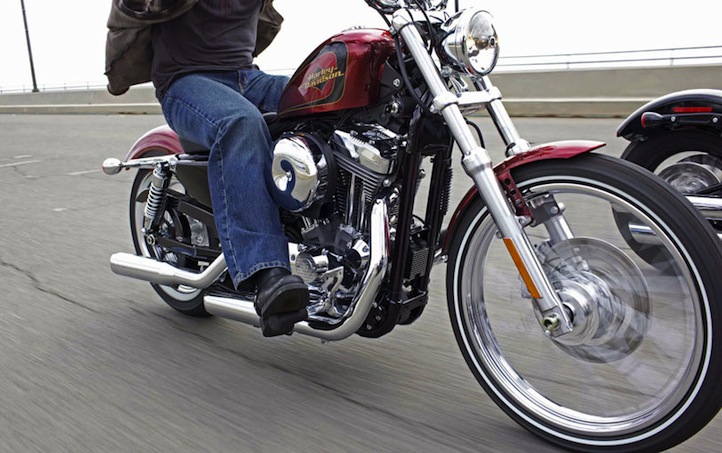 L+T: What was the inspiration behind pulling concepts from custom shops in France, Japan and Germany, for the metal hard candy red flake finish of the Seventy-Two?
FS: Basically, we’ve been traveling the globe for the last 12 years, to Europe; Italy, Germany, France and Spain, and also over to Southeast Asia, to Japan, and really try to understand the underground Harley scenes in those areas. This has been going on for a while, but we started noticing that a lot of people were trying to get back to the basics, in finding these old parts and smaller tanks and keeping it real thin, yet motor, with two wheels, so it almost feels like a bicycle again. But ultimately it is kind of domestic-centric. The roots of it are right here in the states, mainly in California, but all around America. In the ‘60s and ‘70s, people were doing that. People were riding choppers and saying “I need to do something funky.” And now what we’re seeing across the globe is people reflecting our history. They kind of put the mirror up and said “Hey, this is what your country was doing back then.” Which is really cool, because you find that they embrace the hardcore, authenticity of it. They’ll sometimes recreate bikes from that period to the ‘T.

L+T: The styling also draws some aspects of East LA lowrider culture. What were some of the elements drawn from that era?
FS: Again, that’s kind of us going out there and looking at it. We go to SEMA (Specialty Equipment Market Association) Auto Show every year, so we’re seeing what other manufacturers are doing and lowrider culture, understanding the trends there, looking in or even regurgitating from the past, which has a lot to do with big chrome and big paint jobs.

L+T: The styling is unique down to the chrome engine and the 21-inch tall-laced front wheel. How were you able to make the bike both colorful and narrow?
FS: Basically what happened there was, when we did the Forty-Eight, which you might be familiar with by its big fat tire, but it’s a Sportster that harks back to the basics. Basically with that bike, we took the old peanut tank from history and remanufactured it for more modern day fuel injection and that kind of completed the equation for the Seventy-Two. Without that small tank, you couldn’t have that narrow feel. And reviving the old 1200 Custom 21-inch front, which I mentioned before is the narrowest bike we have, to go up against our fat boy, it looks like a bicycle. I think its that portion of 21-inch front and small tank…when you put that small tank on and you’re sitting on the bike you can see the top the engine and it looks real lean. Then we did color cues, we gave it black color coating and we gave it a grey. While we were designing the bike we tried to give it color cues that made it look lighter, where you got this grey that gives it an “airy feel” versus a black that makes it more dense. So, that with the small 21-inch wheel and the paint really makes the Seventy-Two very narrow. It really speaks to the historical references that used to go on. 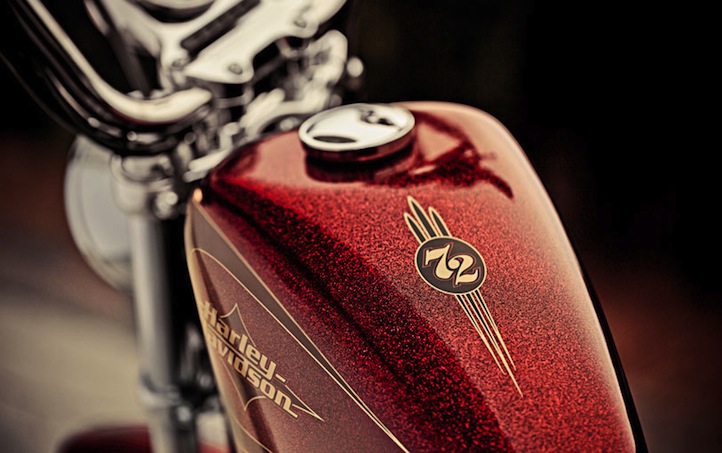 L+T: The candy paint is definitely old school.
FS: The paint has eight different layers, from coating to protect the paint right up to the candy. You got the flakes, when you actually first put them on, they stand up, so you have to clear coat them about three times. In between each clear coat you have to sand it, so you won’t get those flakes protruding through the clear coat. So, we were definitely excited about the process that nobody else would do from a manufacturing standpoint.

L+T: At such a lower-price point, starting at $10,499, is Harley-Davidson looking to attract a younger consumer?
FS: There’s no question. You alluded to it earlier. The stuff going on in different countries in the world has really captured the imagination of our young global customers and we placed it low cause it’s retro. We feel the bike is really going to resonate with them.

L+T: Are you a Harley owner? Which bike do you prefer to rip the highway with?
FS: I’m bike-less right now. But my last bike was a Road Glide. I’m kind of into black, so I had the engine blacked out. The bike was basically all black with a little hit of chrome.

L+T: Which Harley would you recommend for a first-time buyer?
FS: There’s a couple. One would be the Seventy-Two and the other would be our SuperLow. A little story behind the SuperLow, it was designed for low-speed motor ability, so it’s the friendliest bike if you’re just learning to ride a Harley. And the Seventy-Two because of the thinness and the attitude. It’s another easy bike to ride. Probably not as easy as the Super-Low, but you get the attitude of a chopper.