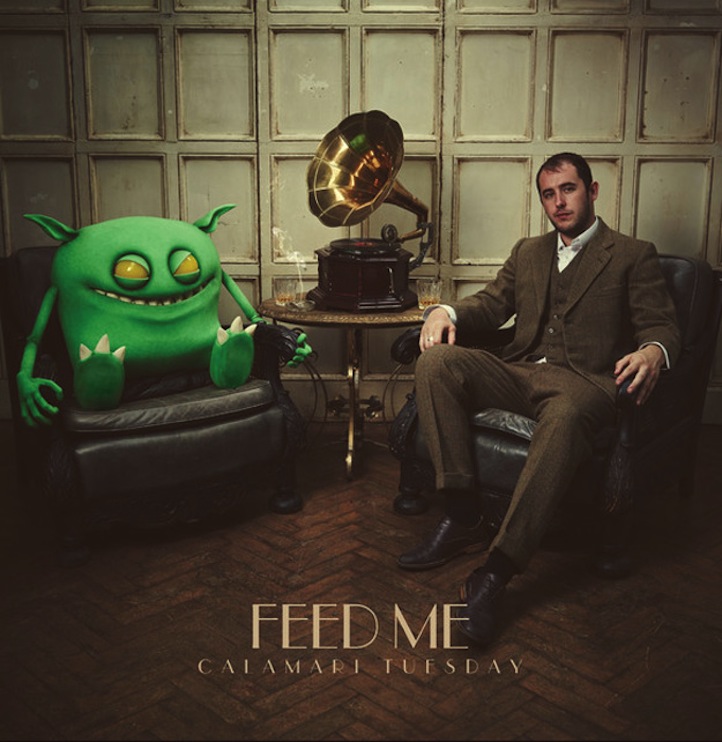 British dance music producer, Jon Gooch (Feed Me) takes risks and defies the industry’s current amalgamation of commercialism and fads. Contrary to what’s considered as “in,” Gooch allows his production to vocalize his high standards for inimitable music – his debut album (released today), Calamari Tuesday, reflects this. The beauty in this album lies in its array of sounds ranging from boisterous trap to serene classical notes. It’s a lively story that draws you in for the journey. Here, Feed Me reflects on the making of Calamari Tuesday and expounds on the concepts behind his side projects.

Life+Times: Back in May, you said you were taking a hiatus from DJing because you don’t feel like it’s really an art. Do you still feel that way?
Feed Me: It’s more a case of just leaving the time for me to rediscover why I love it so much. After doing it pretty much non-stop for almost two and a half years – I moved into my own place and I’m kind of getting settled into my own environment and get back in the studio. I work very quickly when I have the time. I think that people assume that the day starts when you get on stage and when you come off; but since travelling internationally to different continents you’ve got weeks of travel accumulated between all the shows. I think I really needed to just reset my head and basically focus on the more artistic side – well basically the more artistic side from where I see it – of what I’m doing. A lot of the things that make my DJ sets special is the time I put in at the studio to prepare them and make different versions of tracks for the shows.

L+T: I completely understand that. What I really appreciate about your debut album, Calamari Tuesday – this was two years in the making! You were producing this on the road and in the studio. How do you think this affected the album? Did it come out the way you wanted it to?
FM: It did in the end, yeah. If you’d asked me that about a year ago, I would have given you a 20 minute garble answer because I sounded really frustrated. Now that I look back on it, I’m really pleased. It’s kind of a diary of what I’ve been doing really which I think is a different head space of where I’ve been in track-to-track. A couple of tracks took about two years to finish. Then, a couple of them I started years ago, but I didn’t really get them back out of the box until this past summer when I actually had time to get involved with it again. A couple of them were really quick. If an album is to be a kind of bookmark in the position in your life, then I think it comes out quite nicely – it sums up the whole experience in a way for me when I look back to it. So, I’m quite pleased in that aspect.

L+T: This album sounds like a journey. Sometimes fans don’t grasp that as an artist, you have to grow or producing loses its thrill. Even as a person ages, you would hope that individual matures in mindset – but still have aspects of the personality that remains distinctive. This album is still very much a Feed Me album, but you’re not afraid to play with different genres. So, what motivates you to produce in versatility versus sticking to a genre to please other people?
FM: I guess I have quite a short attention span for sticking to anything in particular which is why I started the Feed Me project in the beginning anyway. I’ve been working in the drum n’ bass industry before and it was very difficult for you to branch out without people kind of trying to cut you down or say that you’re leaving your roots – which I always found as really anti-productive. As soon as I started Feed Me, I’ve always been told and encouraged to be as diverse as possible which is exactly what I wanted. Now that the scene is becoming more established and people are starting to gravitate to it and the more you become established, the more people think that they can pigeonhole you. It’s still something I’ve always tried to avoid so I never really set a specific tempo or think ahead too much in terms of what I’m going to make when I sit down to write. Also, I think you should try to move the goal post and challenge people. It’s never interested me to sit and kind of repeat a concept and Feed Me is a perfect example of it. I’d rather keep trying different angles, and hopefully, I think that’s more exciting.

L+T: It keeps things interesting, right?
FM: Yeah. I have a separate project so I do some singing and songwriting as well, something that’s a little more melancholy in perspective. That (Seventh Stitch) I reserve for a different name and a different time of day. I do that in the evening when I’ve got a little bit of quiet time. For the Feed Me stuff, it should be energetic and fun and I’m just always trying to put in new ideas that stay progressive. 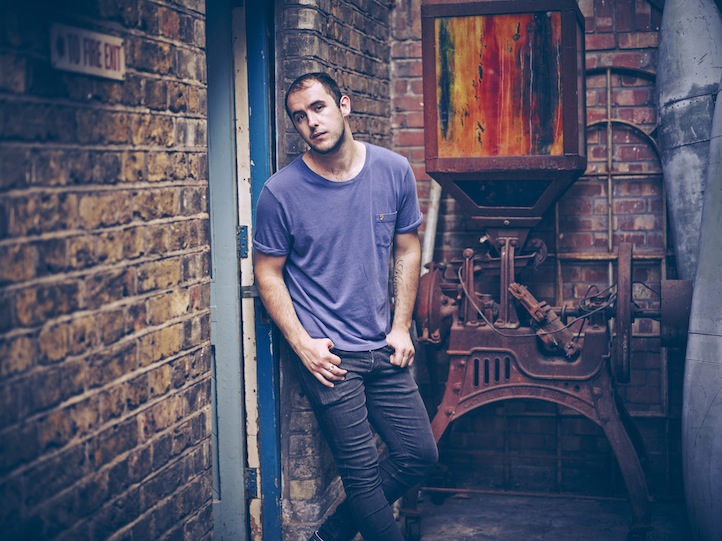 L+T: There are two tracks on there (Calamari Tuesday) that I especially love. They feature your collaboration with two vocalists – Tasha Baxter and Jenna G. How did you find them?
FM: I met Tasha through a drum n’ bass collective – they do a lot more than that electronically – they’re called Noisia. They are all friends of mine. They produced an album for her. She’s from South Africa and they produced a pop album for her. I got in touch with her after that just because we kind of knew each other collectively. It kind of developed along the way because it started out as a pop track that I made for her, but I re-imagined it into that track that it’s become now. Then, Jenna G [is] someone I found in drum n’ bass again. That was actually recorded quite a long time ago – which was actually a last minute idea. I had the chords and progression and we already recorded a drum n’ bass track. At the last minute I asked, ‘Do you want to sing on this?’

L+T: What I really like about that song (“Last Requests”) is the end with the classical arrangement. Beautiful! On your SoVo (Sotto Voce) label, I noticed that you already have two artists that are signed – Tjani and Zeroes. What do you look for in an artist when you sign them?
FM: I suppose what is the hardest thing that I’ve found is to find people with the really original vision and the willingness to see it through. I think it’s quite easy looking around – the production is always getting higher and the technology that’s available to people is always intriguing. So, someone with a really basic laptop knowledge can make quite a sophisticated sounding track. Even when you listen to a demo, it’s easy to find reasonably produced, put together dance tracks. It doesn’t really matter to me about the production quality, but I’m looking for people with a very strong idea of what they want to represent. So, both those people I chose for that reason.

L+T: I hope this isn’t a dumb question, but what is the name of the green monster? Is his name Feed Me too?
FM: I get asked that quite a lot. Just Feed Me, really.

L+T: I thought so. I kept looking it up and I couldn’t find a solid answer.
FM: He’s named a few times because people have just defined him. He wasn’t supposed to be someone who had a name. (Laughs) Maybe I should now.

L+T: He needs a name, Jon!
FM: I’ll do a competition next year or something.

L+T: I saw the video clips of the Feed Me monster with animatronics. Who did you work with on creating the animated features?
FM: I grew up on a lot of Jim Henson films and stuff like that. I’ve always been interested in animatronics. So, I found a guy working in London who was straight away interested in kind of visualizing it. He’s done stuff for Where The Wild Things Are and all kinds of film work. He already had top level Hollywood experience. Then, there was the case of sculpting the character into the right shape. It took quite a long time in getting him to look right – working out silly things like figuring out how long his arms needed to be and how tall he is and all that. Basically, he and his team took a year and a bit in building it literally from scratch. It’s been fun watching it come together.

L+T: It looks a bit creepy if you leave him popped up on your computer screen. I still think it’s unique.
FM: The idea is to work on a short film. More recently, I’ve got the connections and the ability to start pushing it in that direction. I thought it would be nice to score it. I have a basic story – which is secret. We’re basically working on the story on how me and Feed Me met.

L+T: I’m looking forward to that! My last question for you and every producer – Do you feel that a DJ is a musician?
FM: I got kind of forced into DJing originally. I was working for a drum n’ bass record label, I came into the office one day and they put me on flier. They were like, “Look, if you want to stay on the label you’ve got to play this show.” So, I went home and I spent all my money on turntables. I practiced every night until I was good. CDJs had just come out at the time. I bought one and learned how to use that as well. That was, like, ten years ago and I’ve been DJing constantly ever since. I’ve always really enjoyed it…I guess it’s artistic and some people really turn it into an art form. You don’t have to be a musician to DJ though. You don’t really have to know much about music at all depending on what you’re actually playing. I think as technology is moving on, it’s been kind of left behind in that sense. I think now it’s being pushed into a kind of commercial, more of a kind of rockstar kind of thing. The actually kind of art form of it is largely lost. A lot of people aren’t interested in how you’re doing what you’re doing. It’s more about the performance in general. And then, its edges start to blur and it becomes a part of everything else. So, are DJs musicians? ‘No’ is the short answer.