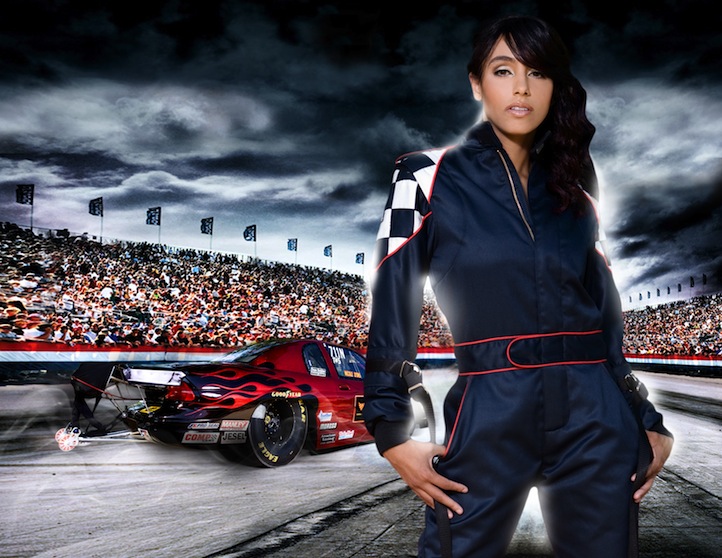 Some people were born to go fast. Drag racer Nicole Lyons is one of them. Lyons is a serious contender in multiple divisions for the National Hot Rod Association as a pro-stock driver. She is the first African-American woman to compete in the NHRA. On a good day, Lyon flies across the finish line of the quarter-mile in less than five seconds in her pro-mod ’69 Camaro that boasts over 3,000 horsepower. “You’re talking about the fastest motorsport in the world,” she says. “It’s an incredible rush and amazing thing to go that fast.”

In a few precious seconds, she has to steer, shift the car and make sure her parachute is pulled. “If anything is going wrong, in the blink of an eye I have to correct it,” she says. “If we were to wreck in one of these cars, it could be the end of it.” It all comes down to lightening fast responses.

Lyons supplements skill with physical training. She prescribes to a regular football workout, including plyometrics and weight training. She holds a black belt in Tang Soo Do, a form of karate that incorporates kickboxing, street tactics and traditional technique, which she say helps her refine her hand and foot coordination, and to stay mentally focused. Focus is a necessity on race day, when she’s suited in up in a thick fire suit, sometimes sitting in the car for up to an hour before taking off from the starting line. “Racing is 90 percent mental,” she says. “You have to condition your mind to go that fast and react that fast, and not freak out and panic.”

For most of her life, she has been in and around racecars, due to her drag-racing father Jack Davis. “My dad was a famed street racer. He was that go-to guy on the street in LA,” she says. “My dad used to take me to all the street races at seven-years-old until two in the morning.” Davis ran a legendary 8-second 1964 Chevy Nova on the Los Angeles streets. Her father put her behind the wheel long before she had her license. “It was very natural because of my dad. With other forms of motorsports, there were no Black faces. In drag racing, I could say with my dad in my corner, I can do that.”

Tragically, her father died one week before her NHRA debut in 2005. “We went out there and beat the number three guy right off the bat,” she said. “I have my dad’s name on my car. We really connected. My dad was there for me.” Her father also passed on his mechanical skills. She owns and operates Cole Muscle Cars with her husband Damion Lyons, who is crew chief of her NHRA Top Sportsman car. They also restore muscle cars and builds race engines in the shop, including a record breaking 1100 horsepower engine.

At writing, she has won 12 races this season, with four races left on the calendar. Lyons has big plans for 2012. She has been testing a late model series car for NASCAR since September. She is also testing a whip-fast turbo pro mod Corvette that will debut in the 2012 NHRA Pro Mod season. “I think my overall goal in NHRA is to win a pro mod championship, to win in NASCAR and ultimately own the teams and bringing up inner city talents.”

Lyons is used to answering questions about being a woman in a male-dominated sport. “They do say in drag racing that women naturally have a quicker reactions,” Lyons says. “We aren’t overthinking things when we go to the line, we’re more fluid than men.” To appreciate the action, she encourages spectators to attend motor sports events. “I think racing is like golf on television, if you’re not there to witness what’s going on, you don’t understand it,” she says. “You have to be there when you’re there and feel what it’s like when 8000 horsepower goes by you.”