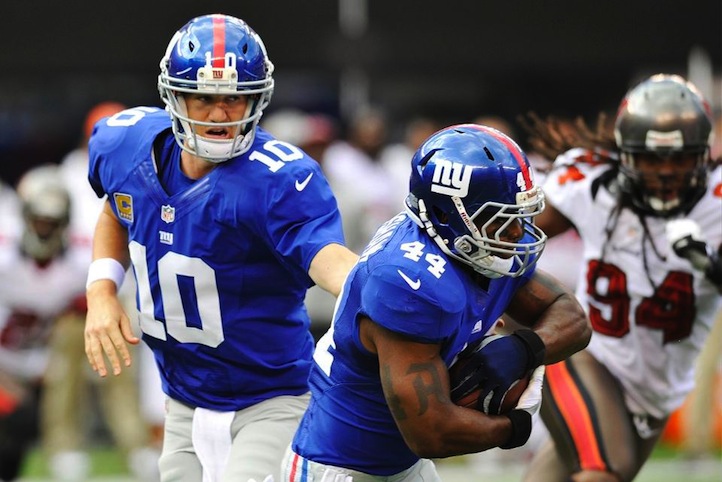 On Sunday, the Tampa Bay Buccaneers learned first hand that you can knock Eli Manning over, but you can’t keep the New York Giants’ elite quarterback down for long.

The two-time Super Bowl MVP overcame a disasterous start –in which he threw three second-quarter interceptions, that were converted into 21 points for Tampa Bay, who claimed a 24-13 halftime lead– and delievered one of the most prolific passing games in NFL history to make up for his first half blunders to help the defending Super Bowl champion Giants avoid an 0-2 record to open the season. Manning threw for 510 yards to rally New York from the early deficit to upend the Bucs 41-34 at MetLife stadium.

After being outplayed by Tony Romo and the Dallas Cowboys in Week 1, Eli bounced back after an artrocious second-quarter and threw for 243 yards and two of his three touchdowns in a staggering 25-point fourth quarter. In the final 6:48 minutes of the game, Manning torched the Buccaneers when they blitzed him. When Tampa Bay sent a defensive back after the Giants’ QB, he went 9-of-14 for 228 yards and two touchdowns. In the fourth quarter, the Bucs sent a defensive back after him on six dropbacks and Manning went 4-of-6 for 164 yards, with a game-tying 80-yard touchdown pass to standout receiver Victor Cruz with six minutes remaining. After Cruz scored and celebrated with his trademark salsa dance, running back Andre Brown followed up on a 2-point conversion run to tie the game. The Super Bowl MVP completed touchdown’s of 23 yards to Hakeem Nicks, 80 yards to Cruz and 33 yards to Martellus Bennett, with 3:59 to play, to give Big Blue a 34-27 lead– that they never surrendered. Manning connected with Cruz for 179 yards and with Nicks for 199.

According to ESPN Stats & Information, Manning’s 510 passing yards against the Bucs is the second-highest total in franchise history– behind Giants great Phil Simms’ 513 yards against the Bengals in ’85– and the NFL’s eight-best sum of all-time. Eli became the first Giants quarterback ever to win a regular-season game while throwing more than 50 times.

“Eli never ceases to amaze me,” Giants team owner John Mara told ESPN’s Ian O’Connor. “You’re never out of a game with him at quarterback.”

“He is just calm, he’s resolved, he’s unflappable,” said Cruz, after his quarterback hit him on the decisive 80-yard game-changer. “He was the same guy he was in the Super Bowl…he didn’t panic. He wasn’t yelling or anything like that. It was normal play-calling and we were just following orders.”

Prior to last season, Manning stirred up controversy when he proclaimed that he was in the same elite class of quarterbacks in the NFL as the New England Patriots’ superstar QB Tom Brady. While many detractors, disparaged him for such a declaration, Manning’s performance on the field silenced all naysayers as he led the Giants to another improbable win over Brady and Co. in last season’s Super Bowl. Eli took home the championship games’ MVP honor for the second time and elevated his name to upper echelon of NFL QB’s conversation; behind Brady, the Packers Aaron Rodgers, the Saints’ Drew Brees, the Steelers’ Ben Roethlisberger and his big brother, Peyton.

Manning never wavers and never blinks. He has long been among the most resilient players in the league. Deep into his first championship season in ‘07, he threw four interceptions against the Minnesota Vikings, who returned three for TDs, and he rebounded to win it all. Last season, he led the G-Men to overcome a mediocre 7-7 record to once again do the unimaginable and win their final six games to claim their second title in five years. In Week 2, Eli once again triumphed over careless turnovers to exhibit his fourth-quarter prowess to show his critics, yet again, that he is, indeed, elite. Do you believe?