An epic retelling of the F. Scott Fitzgerald novel about 1920s New York aristocracy, director Baz Luhrmann‘s The Great Gatsby finds the director balancing themes that were as prevalent in the early 1900s, as they are today. In this exclusive interview with Life+Times, Luhrmann speaks on his take of the classic American tale, working with JAY Z on the film’s score, and what he wants people to take away from seeing the film.

Life+Times: The most interesting things about the film is the tension between the novel, (set in the New York aristocracy of the ’20s), your modern cinematic eye, and the music JAY Z has placed in it. How did you balance all these references?
Baz Luhrmann: The inspiration to weave these references together came from F. Scott Fitzgerald himself, because, although we did very accurate research on NYC in the 1920s and all the imagery and expression of the city in the 1920s is accurate in the film (even the rubber zebras in the pool), we knew we had to unlock for the audience a way of letting them feel what it was like to read Fitzgerald’s book in the 1920s –  to be in New York City at that time. And one of the things Fitzgerald did very successfully was take all things new and modern, take pop-culture and put those in his novel. Particularly he utilized the then new African-American street music – jazz, which was called a “fad” by many, and placed it in the novel, to help tell story. To do something similar for today’s audience was our challenge. And I am a great fan of jazz. But it is a bit rarified today. So it was a natural fit to translate the African-American music that came from the streets called hip-hop, and weave it into a jazz language. When you are talking hip-hop, collaboration, and storytelling, the first person I think of is JAY Z, and this is where it seemed serendipitous that Leo [DiCaprio] and I found ourselves with Jay on the night he was recording “No Church in the Wild” in New York.

L+T: Being a sacred, widely-read book, did you feel that you had to stay close to the source material, or did you give yourself license in the adaptation?
BL: Our real focus was to reveal the book. There were a number of steps we took to do so. First of all, Craig Pearce and I went through the book and said,  “What scenes are absolutely fundamental to the story? What scenes must be in our film? And what scenes can we do with out, even if we love them?” We know for a fact that if you read the whole book or perform it that it takes seven hours – there has recently been a brilliant stage production of the whole book. But we did not have a seven-hour movie in mind. We had to do it in two. So we had to make choices and we chose to stay very focused on the linear plot of the book. Second, one of the big devices in the book is that the story is told from inside the mind of Nick Carraway (who in our interpretation is very much like F. Scott himself).  He is “within and without,” a watcher of and a participator in the story. In fact, in the novel, Fitzgerald very deftly alludes to the fact that Nick is writing a book about Jay Gatsby in the book, this fascinating character Nick met – “Gatsby, the man who gives his name to this book” – “Reading over what I have written so far…” So Craig and I were looking for a way that we could show, rather than just have disembodied voiceover throughout the whole film, show Nick actually dealing with the writing, dealing with his experience of Gatsby, as he does in the novel. How we do really is the one big difference in the film. I won’t say how. I will let the audience discover that for themselves…

L+T: What in 2013 makes this adaptation of the film especially poignant?
BL: The Great Gatsby has managed to be relevant in all times. But it is particularly relevant today because, although Fitzgerald published the novel in 1925, in it he more-or-less predicts the crash that is coming in 1929. The ’20s was a time, because of the shared national hypocrisy of Prohibition (people were railing against alcohol one minute and demanding wine at their table the next), that a slight rubbery morality was allowed to flourish, that there was confusion in the national moral dials so to speak. 1920s New York City was flush with money and booze, the stocks went ever-higher, skyscrapers vaulted to new peaks, and so it seemed that man-kind could only go up. But Fitzgerald – and I think you can see and read this in Gatsby and in much of Fitzgerald’s work – he can see that something is corrupt morally in society and it is going to come crashing down. And I think to a certain extent we have gone through that ourselves recently. Since 9/11 there has been an added slight moral rubberiness in our world, and we all know that things came crashing down. And it is this that makes the Gatsby story especially relevant today. 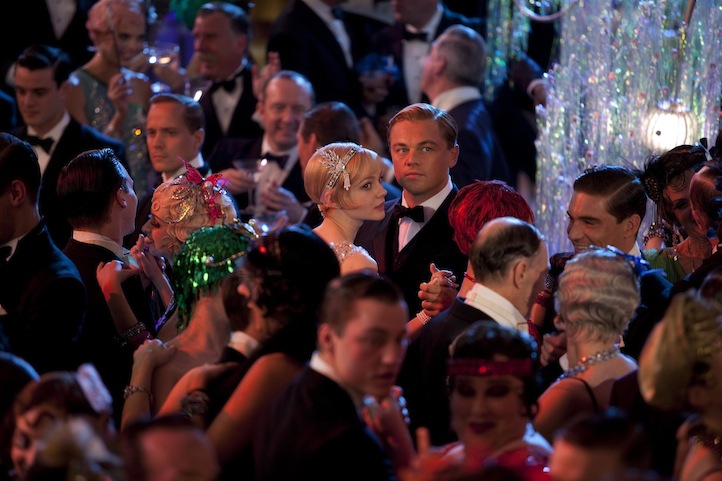 L+T: With the film’s release pushed back from its original date, how have you continued to evolve the film, and how much has it changed from the film since you initially shot it?
BL: With everything I make, I set out with a very clear plan. We pursue that plan. But of course there will be deus ex machina, acts of God, and in this case it was the weather. As we were shooting, Sydney was being drenched day in and day out by La Nina, some of the wettest weather on record, and so we had to shut down shooting and then resume shooting the following year. But this had a silver lining. I had just begun to connect with JAY Z, and both of us connected over the idea of doing what Fitzgerald did – using popular music, the music of the streets, a blend, jazz, hip-hop and popular music throughout the film. In our thinking it became clear to us both, especially given the variety of artists we were working with, that this was no ordinary soundtrack and no ordinary music collaboration. And the extra time allowed us to spend more time together, to include some more of Jay’s great collaborators, including Jeymes Samuel, who, in my estimation, is the king of popular cultural references and has a true musical spirit that uplifted the project. All of this also made the project a greater joy, as I was able to go further in the collaboration as we had more time.

L+T: How did the soundtrack influence the film’s overall tone?
BL: Actually they speak to each other. Like musical instruments they have to work in concert. But there is no doubt that popular music played such a fundamental part in the art of Fitzgerald. So music and popular culture had to play a part in the telling of this story. For example, Fitzgerald was a lover of all things modern, of cinema. And that is why I wanted to take the leap into 3D. Not to have things whooshing at the audience, but because I had the privilege of seeing Hitchcock’s first 3D drama Dial M for Murder (1954) on the original projectors. I saw actors (in this case Grace Kelly) moving on sets, where camera wasn’t moving, but they were simply acting in a space. Much like the theatre. And it occurred to me that our real special affect could be seeing a group of some of the finest actors of this generation go at each other in intensely dramatic scenes in the 3D idiom. Now, in 3D, when you take music, you also almost have to think about it in 3D too, the layering of the music. There is one scene in the speakeasy, for example, where we go in a very short time from JAY Z rapping over a contemporary track, “100$ Dolla Bills,” into a jazz version of that contemporary track, into a piece of score, back to the contemporary track, back into traditional jazz by the Bryan Ferry Orchestra, and then end the scene with a new contemporary track that is jazz influenced. So what we are saying is, although our story may be set in the 1920s, to quote one of Jay’s rhymes “history doesn’t repeat itself, it rhymes.” What I get from that is just that the universal truth moves through time and geography. There was a Jay Gatsby in 1922; there is a Jay Gatsby today. And we all know one. 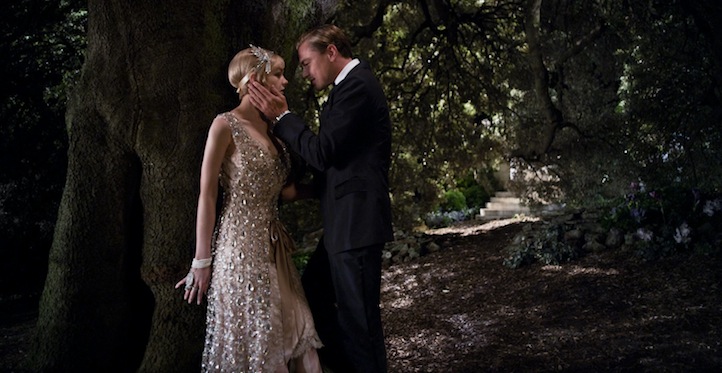 L+T: What do you want people to take away from this adaption of The Great Gatsby?
BL: In the end, as Jay said when he first saw it, the book is very aspirational. The idea being that in America you can pursue a dream. Of course, Gatsby is meant to end tragically because he has such an absolute ideal in his mind, an absolute dream, and he will not let reality rewrite the script of that dream. This makes him an inspirational character for us less-romantic types, but it also means he is headed for a tragic conclusion. Apart from the attractiveness of the decadence of this time, which JAY Z’s ”No Church in the Wild” evokes early on in the film, you can recognize in the story that Nick begins by giving up his dream, his love and desire to write, and instead goes to make money on Wall Street, and ends by beginning his life afresh and anew, realizing that he must reveal himself to himself, he must find his own journey. As it turns out for Nick that journey is a creative one, and the first step in that creativity is writing a book about a guy he met once who everyone wrote off as a gangster but really was much more than that. I thought JAY Z, when he first saw the rough cut, put it very succinctly. He turned to me and said “It is not really about whether Gatsby made his money illegally or not, it is about whether he was a good person or not.” And I think that is the big idea in the book. It is about finding a personal moral compass, not a perceived moral compass.

The Great Gatsby opens nationwide on May 10, 2013. Click here for more information.