The art that Robert Bradford produces, at first glance, looks like a throwback to the innocent days of kindergarten: life-sized dog sculptures adorned with found colorful objects, an assemblage of Barbie dolls, toy guns, plastic figurines and miniature trinkets. His energy-boosting works plays like a modern game of Where’s Waldo, and while costly, even the artist himself can’t afford his own art. Mr. Bradford played host, and took Life+Times through his archival collection, providing insight and personal anecdotes to some of his favorite works. Welcome to the hallucination-inducing magical world of Mr. Robert Bradford. 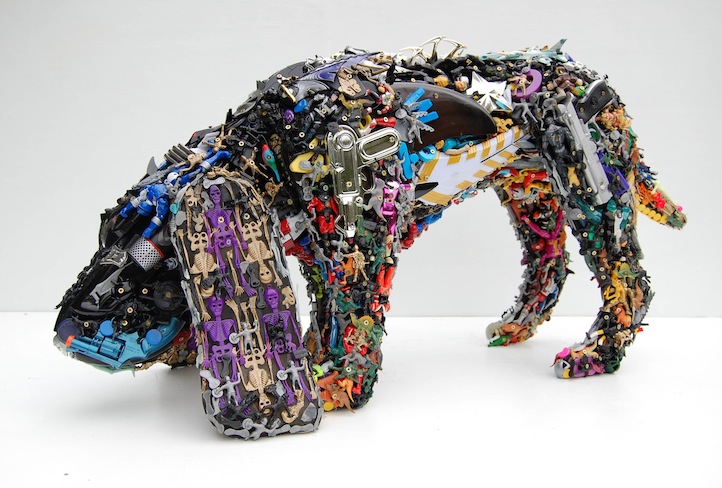 “This is one of my favorite dogs, and it’s part of my ‘Sniff’ or ‘Sniffer’ series. I have made 15 or so of these and they are all completely different. Some pieces just fall together, and this is one that seemed to determine itself. I think I made it in 2010 (only my judging by its ears) around Halloween. He showed up in London at an art fair, but nobody bought him. After that, he was shipped off to Paris and sold quickly. For me, he is both beautiful and moody, and while there are some pieces that I would like to keep, unfortunately, I can’t afford my own work.” 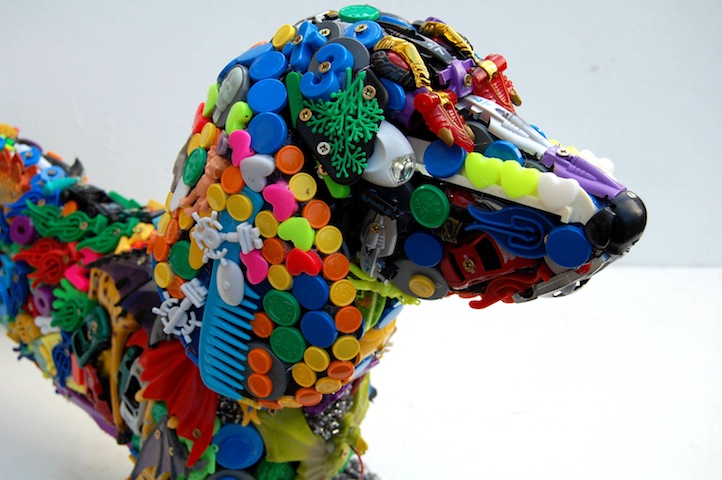 “‘Dash’ is short for Daschund, and it’s a bit ironic, as with those legs, he will not go anywhere fast. For me, the individual breeds of dogs often represent aspects of human personalities, so this dog may have ‘small dog syndrome’, meaning, his personality may be a little bigger – in order to compensate for his size. He was a commission in Bath, England (in 2009), and he appeared for a very short time in a London Art Fair before being collected by his new owner.”

“Again, this is part of an ongoing series of varying treatments to this iconic instrument of death. I wonder How Mr. Kalashnikov feels or felt about his very utilitarian invention. (I understand that you can take the weapon with you through rivers and it will still kill people when you reach the other side). My aim with these pieces is both to recognize the guns lethal beauty, while at the same time depower it and ridicule its function. Often, I like to work with emotional ambivalence, either within one piece of by juxtaposition with more than one.” 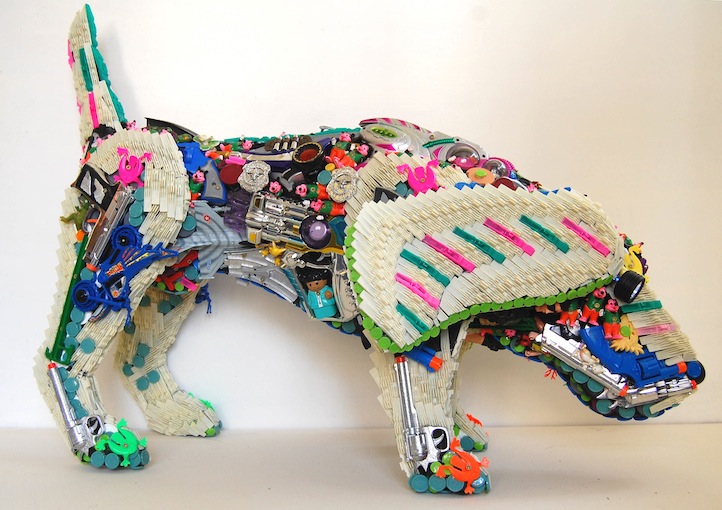 “Again, this is part of my ‘Sniffer’ series, except with a notable ear variation. Pigs cannot fly and neither can dogs, but with this one, I incorporated the rather silly idea that his floppy ears could cause him to take off. Some of the dogs are a little mechanistic, meaning I try to streamline them or give them an ‘other than dog’ function’. Sometimes I like to work with the impossible aspiration and hopefully humorous failure. Pegasus Dog was one of several pieces bought by Ripley’s Museum and is on show somewhere in America.”