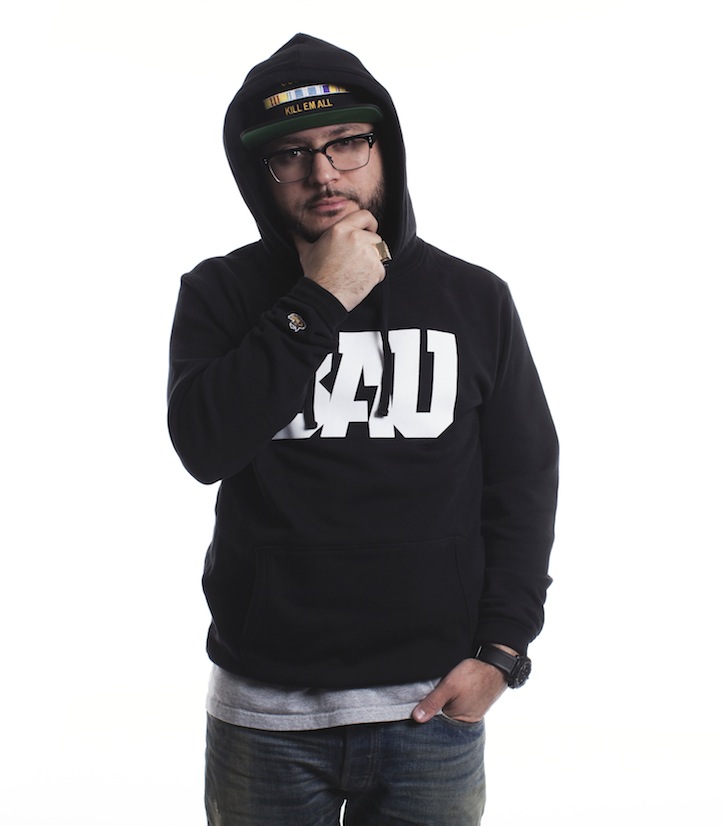 Even in an era where wearing many hats is the new norm, Frank The Butcher manages to set himself apart from his peers. As a creative director, brand manager, designer, writer, co-host and record producer he’s collaborated with established brands like Reebok, Adidas, New Balance, Mitchell & Ness and 40oz NY on special projects, he’s held high-ranking positions at both Boylston Trading Company and Concepts and is the creative force behind Business As Usual and The Butcher’s Block. With a resume as extensive as Frank’s it’s difficult to sum up all that he does, but to him he simply “translates what brands do into something that resonates with our culture.” The adopted son of Boston has built an empire of sorts with his passion for creativity being his sole guide. Life+ Times chopped it up with the ever busy Frank The Butcher about everything he has going on from him finally starting his own clothing line to his new mixtape, All Is Fair.

Life + Times: Who is Frank The Butcher?
Frank the Butcher: That’s the illest question ever [laughs]. I guess I just have a passion for creating. It doesn’t matter what medium. I actually started in music first with production and off of the strength of that came art. I was always drawing, but it seems like everything always stems from music for me. Music is my lifeline, so whether it’s designing a sneaker or doing a project for an apparel company or having my own apparel line like Business As Usual or producing the All Is Fair project it all comes from the same exact place. I think as long as I’m creating I’m happy. That’s who Frank The Butcher is. Regardless of what I’m doing, as long as I’m creating something I’m a fish in water.

L+T: At what point did you realize that you were ready to start your own clothing line?
FB: I think I was a late bloomer. I probably should’ve been did the line. In theory, it would’ve made more sense and nobody would’ve thought it was out of left field. I think a lot of my friends and peers in the industry expected me to do this earlier. They were like “When is this going to happen?” I’m just not the type to jump out of the window that easy. I think about things for a long time, I run every scenario through my head and I plan things down to every last detail. I think launching Business As Usual this summer was the perfect opportunity to start the next phase of my career where I could create something that’s not necessarily attached to a retailer. It can just be an extension of me, my interest, my passions and just be a reflection of what I feel. 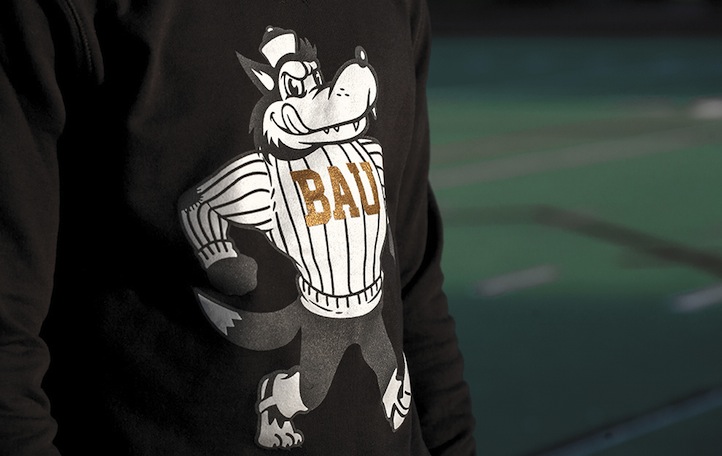 L+T: Streetwear brands often pull from the same sets of influences such as music, the underground, skate culture, etc. How will Business As Usual pull from those same sets of influences, yet establish itself as different from all the other brands?
FB: I always say a lot of these brands are pulling from the same pool of inspiration, but I think the way we process inspiration is a little different. Obviously, I come up in the same era as a lot of these brand owners. I know a lot of them. We are in similar age groups. We like similar things, but it’s the processing of that inspiration into what you do that makes you different from everybody else. Business As Usual, yes it’s encompassing music, the previous sneaker collaborations and all the things that I’ve done, but it does it in a way that it’s not an obvious execution. Business As Usual is clean. It’s not built solely around graphics. It’s built on good clothes and good designs. It’s cool if someone wants to buy a shirt because it says “Business As Usual” across the chest, but I want them to continue to come back because that t-shirt was the best fitting shirt they’ve bought, because it washed well, because it’s comfortable and because the quality and execution is up to par, so while those inspirations we share I also have the need for creating premium clothing. That’s the extension. We can all do graphics on t-shirts, but I want to go one step further and make a premium athletic lifestyle line that you can live in for a long period of time. That’s the difference.

L+T: You know better than most how difficult it can be to introduce a new brand and get people to fully believe in and support it. Was there a point where you reconsidered doing the Business As Usual line?
FTB: Oh yeah, absolutely. That’s why I don’t just jump out of the window for anything. Even though my friends or my peers or my team were like “Yo this is obvious!”, for me it was more about planning and putting something together strategically, because I know that a brand pops up and goes away just as fast as it pops up. You know what I mean? I’m in it for the long haul. I think working with brands and being on the buying side of things gives me a wider perspective, so not only am I on the creative side or the brand building side, I also have the perspective of selling to a consumer. I think that helps me understand the climate a little more. I just want to make real life, real sound decisions. I’m taking it step by step, I’m building it, I’m making it valuable and I’m going to keep stepping forward strong and strategically to make sure my brand is something that’s going to be around for a long time. 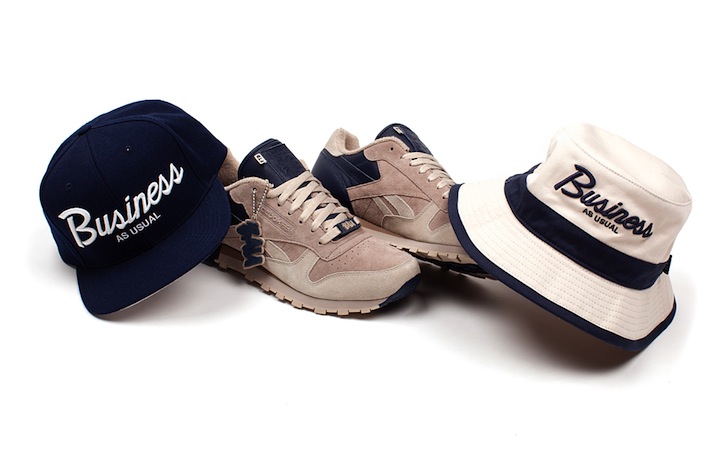 L+T: You redesigned the Reebok Classic Leather for its 30th Anniversary. What was it like tackling such an iconic sneaker? Did you feel any pressure?
FTB: I was humbled. At first I was a little insecure about it. This shoe is 30 years old for a reason. It stuck around for a reason. No pun intended, but it is a classic. The Classic Leather is a classic shoe by every definition of the word. That’s 30 years of being purchased by different generations and different types of people from all walks of life. I felt like “Shit, I don’t want to mess this shoe up,” so I sat with it for a little bit and I started trying to figure out where my inspirations were going to come from. Where I drew my inspirations from were mid to late ‘90s boot culture like the Vasque boots and the Asolo boots and tried to find a color palette and a material combination that was totally wearable. A lot of these collaborative shoes, including some that I’ve done seem to be more of mantel pieces or collector’s items. You don’t want to wear them. You don’t want to mess them up. I wanted to create a shoe that you knew was special, but it still be something you could wear everyday and I think I did that. That shoe was also the debut of Business As Usual and I thank Reebok for that.

L+T: How does your mantra “business as usual” represent who you are?
FTB: I’ve been shouting “business as usual” for years. I had it tattooed on me. It was just one of my mottos. It has been in front of my face for years. It’s a perfect title that represents what I am about which is not letting anything deter me from getting where I need to go. That’s what it means to me. The world doesn’t stop spinning and regardless of what happens you have to keep trucking and pushing forward. It’s always business as usual. I think it represents a lot of people and a philosophy that I want to put out there to the people.

L+T: Your “Fashion Collaborations: Creating a Successful Product Together” class with Rick Williams offers insight to how successful collaborations work. What’s one of the things you wanted people to learn from the class?
FTB: Rick Williams is one of my closest friends. He owns a sneaker boutique and brand out of Detroit, Michigan. I think a lot of people look at what I do and what people like Rick does when we work with other brands and create these partnership projects as these miracle things that are impossible to be a part of, but that really isn’t the case. I think that with this class the main point we want to make is that when you have a valuable perspective and you can lend that perspective to another brand that becomes a beautiful partnership. If New Balance wants to speak to a certain demographic they might partner with someone that has direct communication with that demographic. It’s like one hand washing the other and that’s a true collaboration or partnership. If that brand doesn’t need you or that perspective or you’re not adding anything on to what they do currently then all it is is you putting your names together and doing a shirt or something. I think the best collaborations come from lending your perspectives and creating something that speaks to a new set of people. That’s what that class was kind of explaining. That philosophy of introducing a brand to a new set of people, doing things a little different, speaking to a set of people that the company might not necessarily have the language to connect with is what we’re trying to teach. 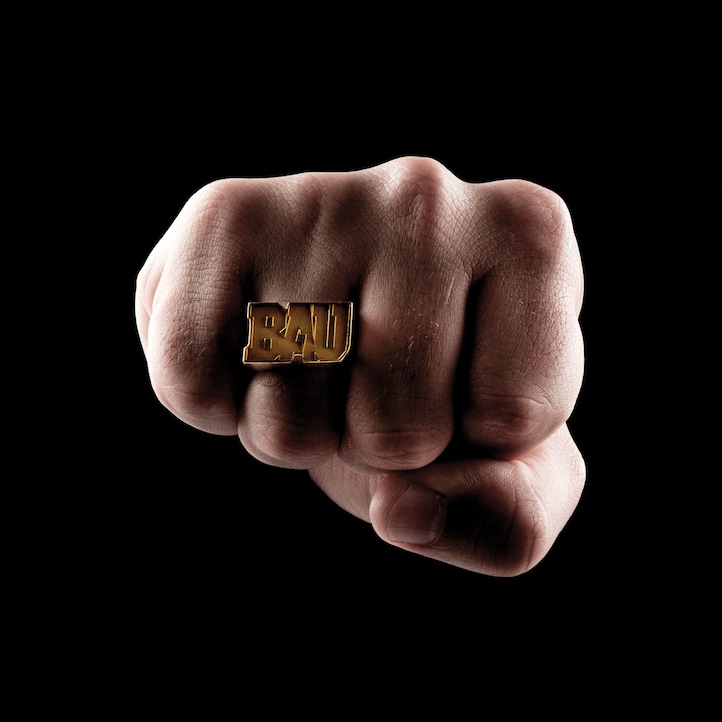 L+T: How did you get into producing?
FTB: I had a crew of friends growing up that were rapping and producing. Producing just became a hobby that I never left alone. It was always a want and need to do more music even as I got more acclimated to the fashion industry and being creative. Music is like my drug. As I started growing my creative flow with designing it kind of reinvigorated my creative flow with music. I knew we were about to launch Business As Usual and figured what better way to showcase another one of my passions than for it to coincide with the brand launch. That’s what I did with the BAU: Presents All Is Fair project. All Is Fair was produced by me and my production partner Paul Mighty and features a lot of dope rappers that are my friends that are making noise in the industry. Everything was done in-house. I have a great team. We’re like a little creative hub here. It feels really good to have a platform to showcase my work whether it’s music or fashion.